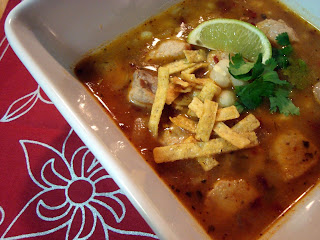 We are so done with winter, with the snow and sleet and rain and the bitter cold that chills you through and through. But winter doesn't seem to be done with us. Craving warmth, we made this delicious one-pot stew that heated us right up (a little too much heat, actually, but we'll get to that). It's called pozole, and, according to the all-knowing Wikipedia, it's a traditional Mexican dish made with cacahuazintle corn (also known as hominy) and meat, and was originally only served on special occasions. The details about that include cannibalism so we won't go into that here so as not to ruin your appetite. 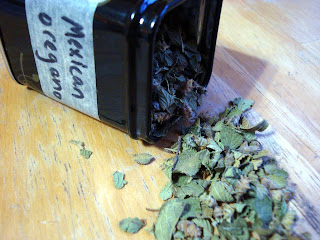 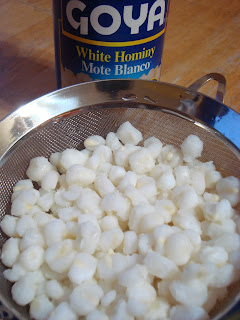 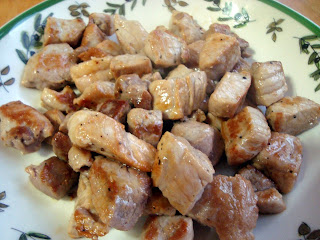 We were inspired by a variety of recipes we found online and made ours with pork. We weren't sure if we could find hominy, but we did find canned hominy in the Goya section at our usual grocery store, which, we are thrilled to say, seems to be stocking a much wider variety of products as of late. We had a can of chipotle peppers in adobo sauce in the pantry, and we used three of them to flavor the broth, and then decided next time we will only use two. Or maybe one. It was pretty spicy, so be forewarned. 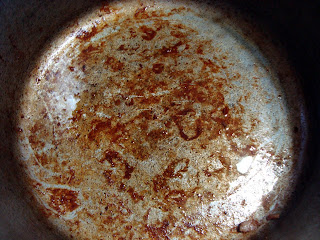 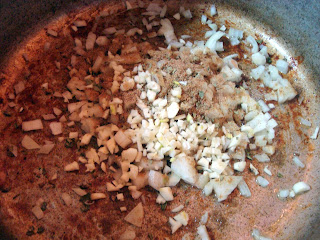 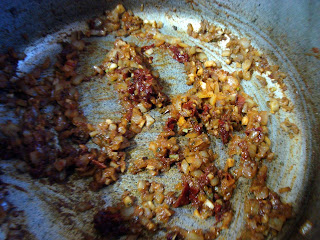 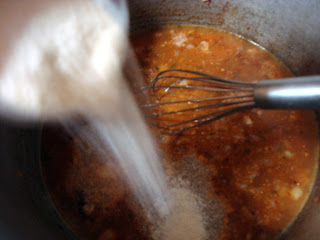 Other than that, we were delighted by the various flavors and textures in the stew, as we were with the easiness of making it. And as suspicious as that tin of Mexican oregano may look, it really is Mexican oregano and we suggest looking for it if you plan to make this spicy, zesty dish, because it really gave it an interesting flavor. 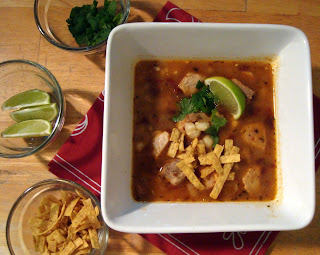 Heat oil in a large stockpot over medium heat. Add the pork and brown on all sides. Remove from pot and set aside. Add onions, garlic, chipotles, cumin, coriander and oregano and 2 tablespoons of water. Stir up all the browned bits from the pork, and cook until onion starts to brown, about 5 minutes, stirring occasionally. Add 2 of the remaining 3 cups of water, chicken broth, then whisk in the cornmeal. Simmer over medium heat, stirring often. Add hominy, then season with salt and pepper to taste. If you want to add the remaining 1 cup of water, depending on taste and consistency, do so here. Continue to simmer until mixture begins to thicken, about 5 minutes. Return pork to the pot and add lime juice. Cook until pork is warmed through, about 5 additional minutes. Serve in bowls and garnish each serving with cilantro, tortilla strips and a wedge of lime (also a glass of water if you used 3 of the chipotles!) 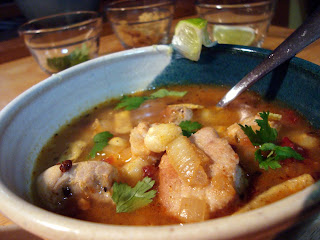 This looks so good. I have a can of hominy in my larder, so I'll give your dish a try. I saw your link on Carole's Chatter.

I need to find me some chipotle! Thanks for linking up with Carole's Chatter. Cheers

Can't believe I passed on a portion.

Oh, this looks so good! We had a pretty short soup season this year, but its so unpredictable I'm sure we will have another cold spell so I can try this out!

This Pork and Chipotle Pozole looks and sounds wonderful. I love all the flavors in this recipe. Can't wait to make some.