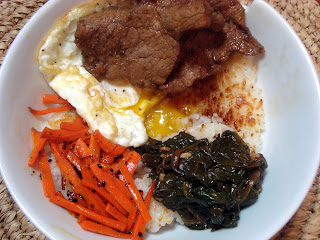 It may be that you don't remember Hanson, of MMMBop fame. Without trying to insult anyone who loved that boy band from the late 90s, we would probably count them in the category of One Hit Wonders. Yet we just couldn't help ourselves in naming this post after their hit song. Corniness has its place in the world, doesn't it?

Okay, all corniness aside, in case you're wondering what exactly this post is about (if not Hanson), it's about the Korean smorgasbord-in-a-dish that is known as bibimbap. The name alone is so fun to say, we think you should say it out loud right now. Come on, have a little fun. Bibimbap!

The basics of bibimbap involve a bowl with some rice and vegetables, and perhaps some meat or fish, all topped with a fried egg. It's everything in a bowl. It's healthy and delicious. It's fun. It's amazing. Say it again - Bibimbap! 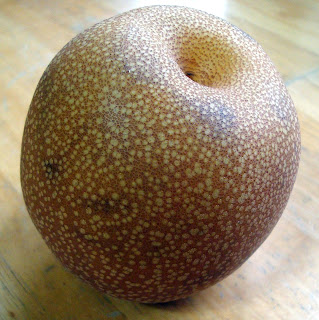 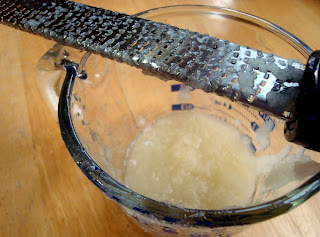 Asian Pear (above), grated (below)

Making bibimbap at home is somewhat of a chore, as you can probably tell, because each component must be made separately and then assembled into the bowl. Frankly, it's a pain in the arse. But if you have the time, a bunch of frying pans, and the inclination, you should try it at least once.

We used, as our guide, this recipe from this month's Bon Appetit via Epicurious. Since we took the time to pickle a pound of daikon radish we got from the farmers' market Sunday, we allowed ourselves to cheat a little by buying a pint of sushi rice from our favorite sushi joint. Cooking is about flexibility, after all!

Mix-in One: As we just mentioned, we started the night before by making pickled daikon for one of our bibimbap "mix-ins" using Tyler Florence's recipe exactly. They came out looking like this (great color, eh?): 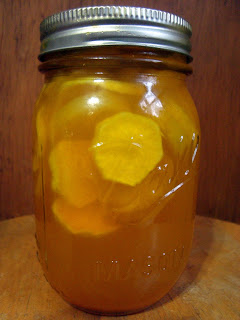 On the night of bibimbap, Amy stopped at the store for the final ingredients - scallions and an Asian pear. She forgot the scallions, so we used dried chives. Although the checkout person didn't know what the Asian pear was, the store did have it, and it did make a huge difference in the flavor of the meat, so definitely look for it if, like us, you live in the frozen tundra known as New England where such things are so alien. 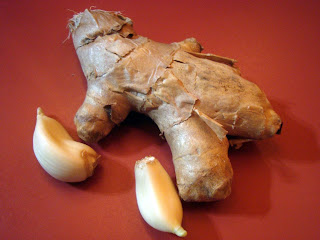 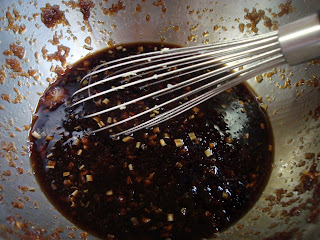 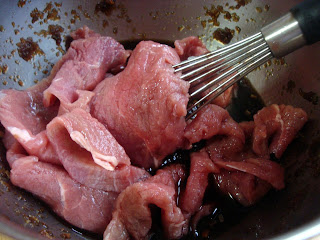 Amy got home and marinated the meat (thinly sliced ribeye also from the farmers' market) right away before setting about making the other mix-ins, again using the Epicurious recipe as a guide.

Whisk first 6 ingredients in a medium bowl. Add beef; toss to coat. Cover; chill for 30 minutes or up to 3 hours. 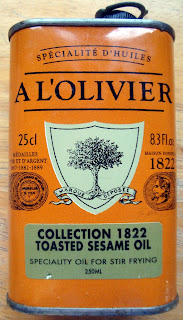 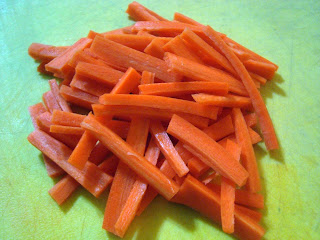 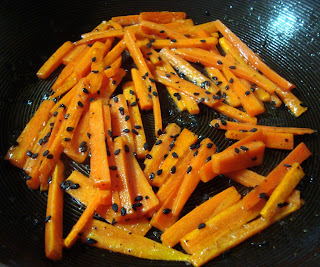 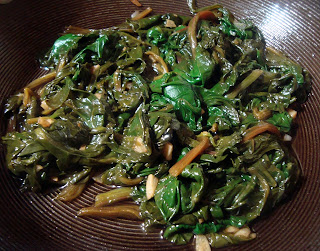 What's next? Our meat was marinated, and the mix-ins were set up in small bowls, and Amy was waiting for Chris to arrive home with the sushi rice. When he did, Chris crisped the rice and made two fried eggs while Amy sauteed the beef. It's nice having four hands in the kitchen. Finally, it was time to assemble our bowls.

Crisping the rice:
Heat one tablespoon toasted sesame oil in a large cast-iron or nonstick skillet over medium heat. Add rice; pat out in an even layer. Cook, rotating skillet for even browning (do not stir), until rice is golden and crisp on bottom, 5-7 minutes. 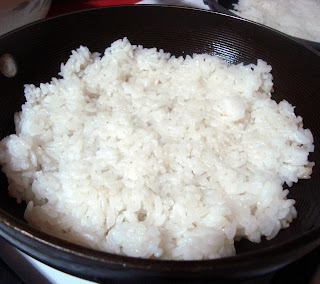 Sauteing the beef:
Heat one tablespoon toasted sesame oil in a large heavy skillet over medium heat. Add beef and cook, turning once, until cooked through and lightly browned, about 3 minutes. 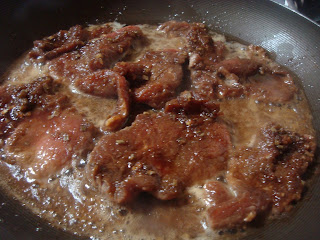 Don't forget to make a fried egg to top each bowl (and try not to break the yolk like Amy did...)!

Assembling the Bibimbap Bowl:
Divide crisped rice among bowls. Top with sauteed beef, your favorite mix-ins, and a fried egg. Yell "MMM...Bibimbap" and dig in with gusto, tasting exactly how worth it all that work was!