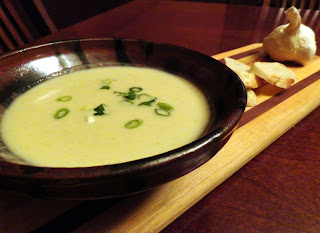 It's February's Secret Recipe Club reveal day! In the Secret Recipe Club, members are assigned a food blog from which we are to choose and make a recipe, then we all blog about it and reveal our posts at the same time. Right now there are 212 members in the SRC; we are divided into four groups so that every Monday is a new reveal day. Since we're in Group C, today is ours, and the blog we were assigned is Heidis Verden (in English, it's "Heidi's World").

Heidi is from Denmark, and she loves to bake breads, cakes, ice creams and other desserts, but she also makes savory dishes of all kinds. Her blog is in Danish, but if you go to the page "Important: For Foreign Visitors!" you can find out how to view it in English (hint: it's much easier if you are using Firefox rather than Internet Explorer). Once we did that, we had a hard time choosing a recipe because there were so many and they all sounded so good. While we really wanted to try one of her ice creams, we thought we'd come back to those when it's a little warmer out. We didn't have a whole lot of time, so we chose not to bake anything. Since it was blustery and cold here, we zoomed in on the soup section and finally decided to make her Roasted Garlic Soup. 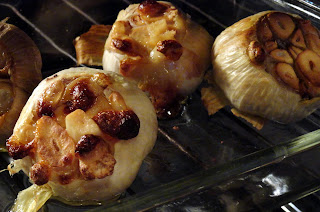 The most important ingredient: roasted garlic

We've made a similar recipe with garlic and potatoes, and were curious as to how this one would compare. We made a couple of minor adaptations based on what we had around the house, most importantly substituting madeira for Heidi's preference, sherry. The soup was fantastic, and even better when we had it again for lunch the following day. The texture was light, silky smooth yet it was completely filling and satisfying. The flavors from all of the alliums made it something that could be enjoyed year-round, and the madeira offered a unique hint of sweetness. There was a nice deep flavor that we guess came  from roasting the garlic first. We even surrendered offered a small portion to Joanne who pronounced it "restaurant-worthy." Yeah, even with its garlic-breath side effect, we loved this soup. Thanks, Heidi!

Add flour to thicken the soup. 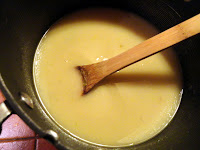 Stir in the warm broth and madeira wine. 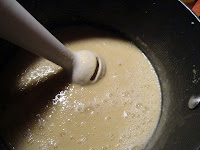 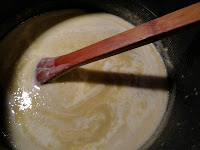 Swirl in the cream and allow to simmer. 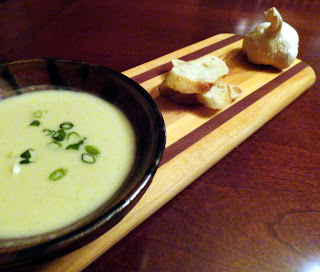 Preheat oven to 350 degrees. Cut off the top 1/4 inch of each garlic head. Place in a small, shallow baking dish and drizzle with olive oil. Bake until golden, 45 minutes to 1 hour. Cool slightly. Press the individual garlic cloves between thumb and finger to release, then chop the garlic. Pour the chicken broth into a small saucepan and set over medium heat to warm. In a large saucepan, over medium heat, melt the butter. Add garlic, leeks, and onion; saute until onion is translucent, about 8 minutes. Gradually add flour, and cook 10 minutes, stirring occasionally. Stir in warm broth and madeira. Simmer 20 minutes, stirring occasionally. Puree soup using an immersion blender. Swirl in the cream, then simmer until thickened, about 10 minutes. Season with lemon juice, salt and white pepper. Ladle into bowls. Garnish with chives. Serve crusty bread on the side and enjoy. 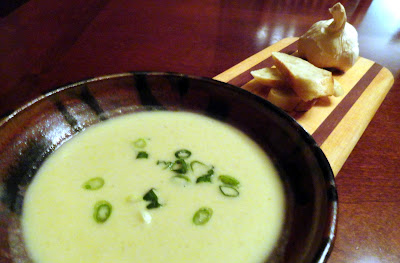 Ohh I'm so happy you enjoyed this - and great choice for the season!
Especially, I'm happy that you actually read the advice for foreign visitors, and were able to convert correctly - it can be tricky with the deciliters and cups, when Google translate thinks they are the same - they are not!
Thanks for your kind words :-)

You'd have to make sure to share this with someone you love so you can both have the garlic breath! Sounds really good, love the color on your roasted garlic.

Yum...what a nice pick for SRC. I've had garlic soup at a Spanish restaurant, but have never made it. This looks like something that would prompt me to finally go buy an immersion blender!

1) My husband loves garlic soup and will reward me greatly if I make this. ;-)

2) Heidi was one of my first assignments, and I loved looking through her blog! I can't believe I missed this recipe!

Anything is a winner with that much roasted garlic! Great SRC post.

Oh this looks tasty. We have a TON of garlic from our CSA baskets from the last few weeks - This would be a good use for it.

you really got me with this soup, roasted garlic makes everything taste better and I know that it can be quite troublesome to eat it often. You have a lovely blog and I enjoyed reading your post

I love roasted garlic and I can only imagine how wonderful the soup is especially with the Madeira...yum!

If you haven't already, I'd love for you to check out my Group 'A' SRC entry: Crunchy Fudgy Heart Bites

Your soup looks so fresh and delicious, love this.

Just the photo of your roasted garlic makes this entire soup worthwhile! Yum!

Roasted garlic soup has been on my mine for weeks....I'm just going to have to make it! I had Heidi last assignment..great blog!

What a yummy looking soup. We are having cold windy weather right now. This looks like a perfect meal.
Great SRC post.

What a wonderful selection for this month's reveal. I absolutely love garlic soup and will have to make this recipe. Nice job. Glad to be part of SRC group C with you.

soup is always a good idea. so is roasted garlic. well done :)

Fantastic! I've tried garlic soup in restaurants but have yet to make my own. Now, I've not got an excuse!