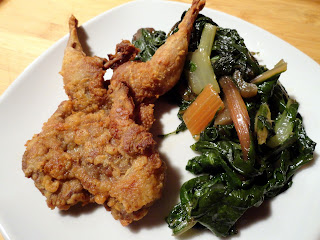 Chris enjoys game meats, and takes advantage of various opportunities each season to enjoy a game dinner with friends or family members. In fact, he has gone hunting in the past, mostly for birds, in particular pheasant and quail, just not recently. Still, when we found a half dozen of these little birds at the market, we bought them. Inspired by an episode of Chef John Besh's New Orleans, we attempted to make Buttermilk Fried Quail. However, we couldn't find his actual recipe, and we no longer had the show on our TiVo, so we did it by (our somewhat failing) memory.

The hard part was deboning the quail. Chef Besh made it look easy (but we didn't have the episode handy, remember). So we did what any normal people would do...we Googled it. We found a great video of Jacques Pepin deboning quail. He, too, made it look easy. Apparently when you do something a gazillion times, it's easy to make it look easy. Too bad Jacques wasn't in our kitchen, because it's not very easy to debone quail. Chris did his best, but the first 3 or 4 (of the six) got a little mangled. The last one was pretty, though! That's the one in the pictures (naturally...).

After the hard part (see previous paragraph), we simply dipped each quail in buttermilk and then in flour we had seasoned with kosher salt, and Tony Chachere's Creole Seasoning, which is definitely a staple in our house. Then we fried them in vegetable oil inside a cast iron pan until they were golden brown (about 3 minutes each side). That's it. 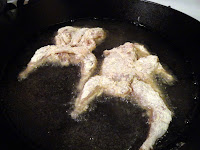 It was an okay first attempt. The quail were crispy without being greasy, had good flavor (they tasted like fried chicken) and were pretty tender on the inside. We served them with a side of wilted Swiss chard. But overall, the result was not really worth the effort. Since then, we've (finally!) purchased John Besh's My New Orleans: The Cookbook, and we've read the real recipe, and we've realized exactly how off base we were. So we're not going to give you "our" recipe here...it will only steer you wrong.
To sum up, here's our advice: Buy the book and make it yourself. The right way. Or just order quail next time you see in on a restaurant menu. That would be easy. 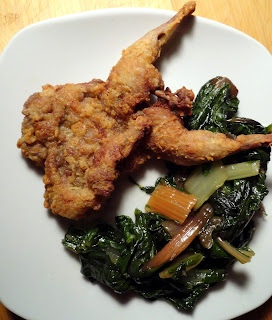 Just getting ready to fix some chicken breasts and you have convinced me to fry them up like these adorable little quail.

John Besh's My New Orleans is such a treasure. It belongs in the collection of everyone who cares about New Orleans and its food.

What an interesting sounding recipe! I've never cooked with quail, but this sounds really good!

Denise@There's a Newf in My Soup! said...

Thank you for your e-mail! I can so relate to this post and attempting to de-bone quail ;-) When I was hosting the Daring Cooks challenge, Gumbo, I made a Besh's Quail gumbo. The butcher assured me the quail in the package were de-boned, which they were not. We totally butchered the first one to shreds, and decided just to leave them whole. Too much work for so little meat. And I have both of Besh's cookbooks and they are wonderful.

I must try frying in buttermilk! Thanks for linking up with Food on Friday. Cheers