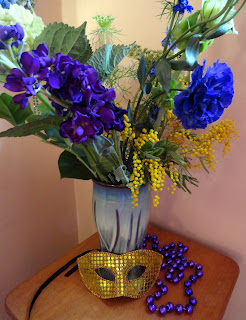 Saturday night was our 9th Mardi Gras Madness party. Amy used to live in New Orleans, and misses it very much, especially around Mardi Gras. In an attempt to ease her (second)-homesickness, we started having a Mardi Gras party when we moved into our house. It has grown so much over the years that on Saturday night, we had (by our count) 101 people attend (including the two of us). And our house is only about 1400 square feet, so...yeah.
Mardi Gras consumes our lives for about 2 weeks every year. It's a lot of work to have that many people over! There's the buying and the prepping and the decorating and the cleaning, and since it's winter here, there's the building of "Tent City" - one assembled insta-tent under which the turkeys are fried, and one giant tarp covering our back deck to provide heat and warmth since not everyone can fit inside the house. Luckily, we have plenty of friends, family and neighbors who pitch in. Those that do are known as the "Krewe" and are given special krewe-beads, different ones each year, to honor their efforts. Special thanks to Krewe 2012! 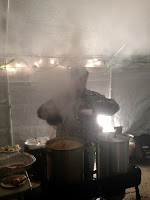 But since you're reading our blog, you're probably more interested in the menu. Chris is in charge of the fried turkeys (this year, 90 pounds of it) and spends most of the night in the driveway where many of the guests watch in awe as each perfectly seasoned crispy fried turkey is lifted from the vat of hot peanut oil (right). It is quickly brought into the house to the carving station (a cutting board set on top of our washing machine) where one hard-working guest volunteers to do the honors. (Thanks, Chipper!) 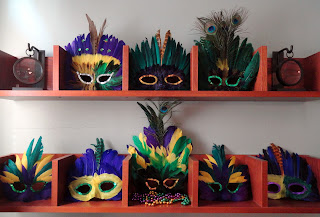 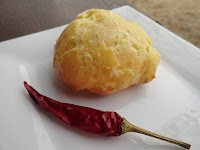 Amy makes a few other dishes, some appear each year, and others depend on her mood. One traditional dish is the Coca-Cola Ham, a spiralled ham cooked in cola and topped with a molasses-brown sugar-mustard glaze. Then this year she also made Pepper-Jack Gougeres (left); Bacon-Walnut Pralines; Muffuletta Pasta Salad with steamed shrimp; and in honor of our local moonshiners, Drunken Piggies in the Blanket (andouille sausage marinated in garlic mustard and Onyx Moonshine and wrapped in crescent dough). As we do every year, we provide the hurricanes (made with Pat O'Brien's Hurricane Mix of course) (this year, about 15 gallons' worth) and a little bit of beer and wine, soda and water. And enough Mardi Gras beads to go around. "Throw me somethin', Mister!"

You're probably wondering how that is enough to feed everyone? Well, it isn't, of course. That's the best part about our Mardi Gras party. Just about everyone brings a dish, and just about every dish is homemade. On Saturday, there was jambalaya, deviled eggs, shrimp cocktail, jalapeno-meat poppers, Cajun nacho dip, three-bean dip, Cajun meatballs, regular meatballs, mashed potato-stuffed tomatoes, chili cheese dip,     veggie pizza, stuffed peppers, American chop suey, stromboli, stuffed mushrooms, spicy mac-n-cheese, Buffalo wings, and much, much more. Then there was the desserts, which included paczkis, chocolate chip cookies, oatmeal chocolate chip cookies, anise cookies with Mardi-Gras-colored frosting, brownies with walnuts, and plain brownies, among others. 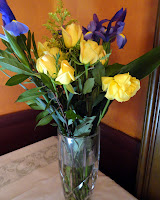 People brought beer, wine, and liquor to share, consume, or offer as gifts. Awesome neighbor J, saint that she is, made 400 (that is not an exaggeration, but an actual number) purple, green and gold (well, yellow), Jello shots. Which are all gone. And her daughter, B, made us a delicious quiche for us to heat and eat the morning after. 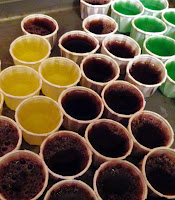 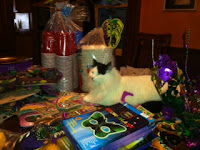 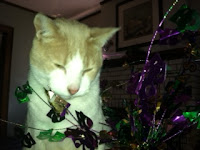 Louie and Newfie enjoy the festivities
Posted by Amy at 12:01 AM

This is a bomb not a soup!! Yummy!

I live in the West and am unfamiliar with Mardi Gras. But--it sounds like one great party!

I want to come to your house next year. I promise I'll pitch in with the Krew.

We had a great time. You do an unbelievable job. I loved the Drunken Piggies, and the Cheddar puffs. The turkey is always perfect, flavorful and moist with delicious crispy skin. I also really enjoyed the deviled eggs and the jambalaya which had just the right amount of heat – makes you think about each bite.
I had a great time talking with your ‘brother from another mother’ and Adam from Onyx. Can’t wait until that moonshine is available in Massachusetts!
Keep in touch,
Sean & Melissa Fiandaca

This is not one great party, Cindy - it is THE great party! This was my 7th year and I vow to always attend! BTW, the jambalaya was mine. : )

OH MY! That sounds like a fantastic time. I hosted my friends over for some jambalaya and Abitas on Sunday, but we're talking 10% of your total people tally. I'm sure after posting about the party, you might get a few crashers next year. I know I'm tempted. Happy Mardi Gras!

- Says she who is wearing a small/tasteful yellow, green, and purple bead today to work.

Sean, glad you dug the jambalaya and it was a great pleasure meeting you and your lovely wife. That is the thing about Mardi Gras madness - I ALWAYS meet new great people every year!

Another year well done I'm glad the mac and cheese went over well. As always thanks for your wonderful hospitality. Bink

Wow!! Wish I were a part of that party! Looks awesome with all the fun accessories and decor, and the food of course. I think I am missing out by not celebrating this year :(

Wow- that is a lot of work! Congrats to you, both.