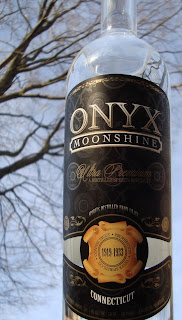 Adam von Gootkin and Peter Kowalczyk are living the dream. When they met years ago at a party, they recognized some sort of entrepreneurial spirit in one another and knew they were destined for great things. Well, one of those great things is taking shape right now – the two have founded Onyx Spirits and are making moonshine in Manchester, CT. Inspired by Connecticut’s grand history of bootlegging during the Prohibition era, and using an authentic recipe from those times (slightly tweaked), these guys are making history by founding a company whose products “go against the grain” (pun intended), and they are doing it all in a historic setting - the Hilliard Mills, site of America’s oldest woolen mill.
Many people have a certain idea about moonshine. Frankly, we did too. We have tried that stuff that smells like gasoline and burns from the second it touches your lips to the moment it sloshes into your gut. There’s not a whole lot of pleasure to be had in the drinking of that type of moonshine. However, Adam and Pete thought to themselves, “Why isn’t there an excellent moonshine being made in America?” and then they set out to do just that. We're here to tell you, they succeeded, creating a liquor they call Onyx Moonshine that is literally a category unto itself – not a whiskey, not a vodka, not a grain alcohol, but a smooth “Distilled Spirit Specialty” liquor made of 50% corn and Connecticut spring water with flavor notes that can include wood, honey, botanicals and sweet corn.
﻿﻿ ﻿
Living up to their Latin motto “Labora dure, lude durius,” which means “Work hard, play harder,” Adam and Pete met us at Manchester’s favorite burger bar (that just happens to carry Onyx Moonshine), Corey’s Catsup and Mustard, to talk about and of course, taste their product. Bartender Stacy was thrilled to meet the two moonshiners, saying he can’t keep Onyx on the shelf. He said most people prefer to sip it straight or on the rocks, but this enthusiastic master mixologist spent the evening delivering up some of the most delicious concoctions we have had, all made with Onyx Moonshine.
﻿ ﻿Over yummy sandwiches (namely, the “chicken ‘n waffles” – crispy fried chicken with jack cheese with maple mayo sandwiches between two waffle squares, and the grilled Texas toast turkey club), we talked and sipped and enjoyed the company of these two upstarts. Naturally, our very first taste was Onyx on the rocks, which we found to be a smooth, tasty sipper of a drink very similar to a good whiskey. It really set the tone for the night to taste the pure flavor of the moonshine on its own. 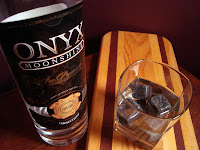 But Stacy had mixing on his mind. He made these drinks on the spot, so we don't have their "official" names, but believe us, we spent much of the night brainstorming possibilities (see photo captions). First, a candy-apple-red drink made from moonshine, Apple Pucker and a splash of cranberry that tasted like a crisp fall day in a New England orchard. Next, moonshine with pineapple and blue curacao – sweet and heavenly and very, well, blue. How about mixing Onyx with pomegranate, tonic and a little lime juice? Sparkly and tart and luscious. Or with Bailey’s and a touch of Goldschlager? Spicy, creamy, and perfect for after dinner. Each sip was fantastic, and the moonshine mixed as well as any vodka could. Plus, the drinks went well with the food. As Stacy aptly put it, “You can’t pair a restaurant and a liquor together better than Onyx Moonshine and Corey’s!” We wholeheartedly agree.
﻿﻿﻿﻿﻿ ﻿﻿﻿﻿﻿﻿
Staying local and true to Connecticut is so important to Adam and Pete that the Charter Oak is featured on every bottle that comes out of Onyx. They’ve also created a CT-inspired drink - The Charter Oak Cocktail, which offers a deliciously authentic taste of New England. Here’s the recipe, shared with us by Peter:
In a crockpot, warm one part Onyx Moonshine with two parts Connecticut-made apple cider. Add a cinnamon stick or two, some Clementine slices, and two teaspoons of brown sugar and allow to simmer for two hours. Serve garnished with freshly whipped cream and, since Connecticut is the Nutmeg State after all, a sprinkle of the spice. 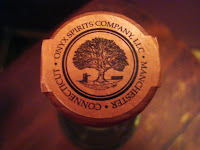 So what does the future hold for Onyx Spirits? Adam tells us that for now, quality control mixed with slow and controlled growth is the key. They are not doing any advertising or marketing as of yet, but still they managed to sell out a couple of times in December while trying to meet holiday demands. As of early January 2012, they are putting out eighty cases of moonshine a day and delivering their product to over 150 restaurants, bars and liquor stores in Connecticut alone. Rumor has it that, in true moonshine tradition, people from New York, Rhode Island, and Massachusetts are crossing state borders to get their hands on a bottle. Adding to the widespread interest in the product, Onyx Moonshine went national when it was included in the “swag bags” given to performers at the 45th Annual Country Music Association Awards.
﻿

All of which is to say, making moonshine is keeping these guys pretty busy, so at this point in time, it is the only liquor being produced at the old Manchester mill. Nevertheless, future plans include creating limoncello and vodka, at the very least. In the meantime, though, Onyx Moonshine has definitely won us over. We plan to keep a bottle on our shelf at all times. And we will certainly be keeping our eyes on Onyx Spirits, a true Connecticut success story. Head over to their website or Facebook page for more information about Onyx Spirits.
We wish Peter and Adam the best of luck! And a big "Thank you" to everyone at Corey's Catsup and Mustard, particularly Stacy!
And, in the next few days, be sure to come back to A Couple in the Kitchen for some food recipes made with love and Onyx Moonshine.
Posted by Amy at 4:14 PM

I love entrepreneurial stories like this. These guys sound great and I wish they distributed Onyx here. (Oklahoma has such antiquated liquor laws that we would probable be arrested if we tried to order some through the mail! :) ) Great post.