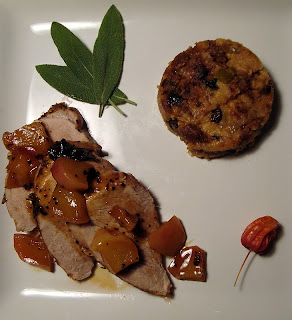 When yet another big cardboard box arrived on our doorstep, Chris was wondering what I had bought now (I may or may not have a little Internet shopping problem...). Fact is, it was more treats from the Foodbuzz Tastemaker Program. This time, we received not one but two large packages of Bauducco Panettone - one was with Hershey's chocolate chips, and one with Sun-Maid raisins and candied fruits. In case you're not sure what panettone is, it is an Italian bread-like cake that is usually served around the holidays. Once we opened the box, our creative cooking juices started to flow.
A few days later we planned to make a pork loin for dinner. Sick of plain old veggies or potatoes, we wanted a side dish with pizzazz! Something different! That's when it came to us. We'd make stuffing out of the panettone! 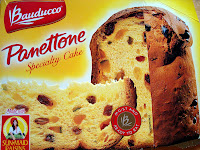 It was a brilliant idea, really, and we're quite proud of the results. The basis of the recipe is my grandmother's bread stuffing, but we made a few adaptations. For the bread, we (obviously) used the panettone with raisins and candied fruits. Of course, this had an inherent sweetness that needed some balance. To bring in savory flavors, we added onions, celery, sage leaves, and chicken broth, and we cooked it in a slow-cooker to make life easy.
Yummy, yum, yum! Sweet, savory, moist and nicely browned, this one is a keeper, and may become our go-to holiday stuffing. It paired nicely as a side to our pork and apples that we had browned then braised in white wine, sage and a dash of port. 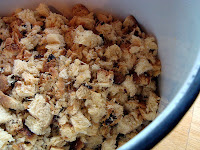 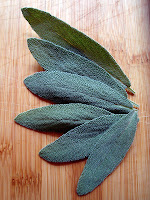 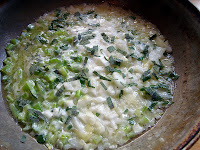 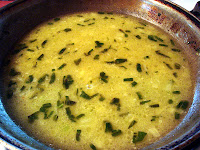 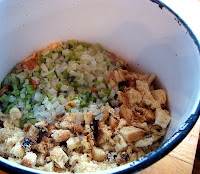 Mix vegetables and panettone together 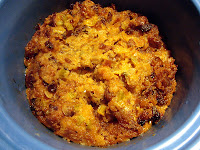 It's getting to be slow-cooker time of year, isn't it--I just posted a recipe using mine last night! What a clever use for the panettone. I love sweet/savory combinations.

Ooh---I bet this was absolutely delicious. I have used pannettone for French (or rather, Italian) toast. I love this savory take.

Happy When Not Hungry said...

I would have never thought of using panettone for stuffing. But it looks and sounds amazing, might just have to try this one out! Yum!!

Delicious!! I love doing stuffing in the crock pot. So nice to put it in there, have it smell good all day, and then enjoy it with dinner!

This stuffing is all kinds of delicious!! And in a crockpot! I would have never thought to cooking stuffing that way!

That is a great idea! The bread would make a pretty fantastic bread pudding for breakfast as well...

I'm not a huge fan of panettone, but I always wind up with a few during the holidays. What a great way to use it!

Gorgeous! I have never seen panettone as stuffing before. This is a yummy recipe and I can totally imagine to use it for thanksgiving dinner.:-)

Clever and tasty idea! Thanks for sharing.

Lovely!! I make my stuffing in the crock pot every year...i gues that makes it more of a dressing. I have never used panettone though! Will have to remember this one!

Confessions of a Culinary Diva said...

Fantastic Idea! Bet it was very tasty. Will be trying this in our kitchen!