Tagine of Golden Chicken with Potatoes and White Beans 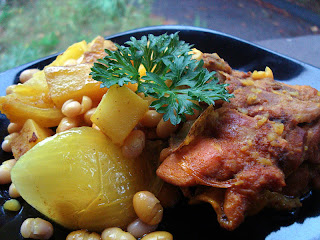 We purchased a tagine last winter and have done a few experiments with it, making flavorful meals in this earthenware coned dish. Why is it shaped this way? The conical cover rests on the flat base and allows for any condensation that occurs during cooking to return to the base and braise the meat and/or vegetables in it. In this way, any meals made in a tagine are truly one-pot wonders. You can even serve the tagine in the base!
This week's wonder is adapted from the cookbook 150 Best Tagine Recipes by Pat Crocker. The golden color on the chicken comes from the aromatic spices turmeric, saffron, and cinnamon, which also offer plenty of exotically warm flavor. The potatoes and white beans round out the meal to make it a hearty one; we're sure you could use other root vegetables instead of potatoes, or chickpeas instead of white beans (as Crocker does). A slight problem we encountered was that our tagine is on the smaller side and we had a bit of overflow (not to mention a very small, very brief fire...) during cooking. All that did was set us off in search of an even bigger tagine! 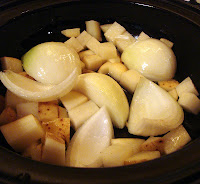 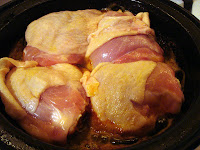 Remove vegetables and brown chicken in spice mixture, meat side down 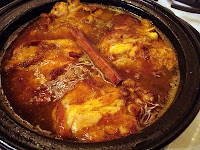 Turn chicken, add cinnamon stick and broth and bring to a boil 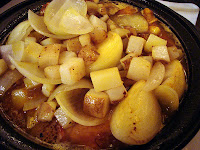 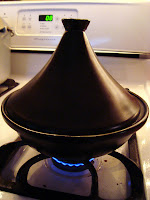 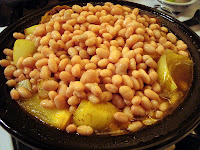 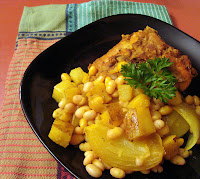 20 strands saffron
1 tablespoon ground turmeric
2 tablespoons olive oil
2 onions, peeled and quartered
2 medium potatoes, diced
salt to taste
4 chicken thighs
1 cup chicken broth
1 cinnamon stick
1/2 of a 14-ounce can of white beans, drained and rinsed
parsley for garnishing
In a bowl, combine melted butter, saffron and turmeric; set aside. In the bottom of flameproof tagine, heat oil over medium heat. Add onions and potatoes and cook for five minutes, stirring often; remove vegetables from tagine and set aside. Add chicken, meat side down, to tagine and cover with spice mixture. Cook for 5-6 minutes, until chicken is browned on meaty side. Turn chicken over. Add broth and cinnamon stick and bring to a boil. Return onions and potatoes to tagine, cover with tagine lid, reduce heat to low and simmer for 25 minutes, stirring once. Stir in white beans, replace lid and simmer for additional 15 minutes until beans are heated and chicken is cooked through. Discard cinnamon and serve garnished with parsley.
Posted by Amy at 6:03 PM

This looks delicious, what a great recipe! :)

I've never used a tagine before, but I'm loving all the ingredients you have in here. Nicely done!

I have wanted a tagine for ages now but they are hard to find for a decent price. Seeing this recipe, now I want one even more :-P

I want a tangine now so I can make this yummy-looking meal!

The promise of golden chicken sounds like a reason to get a tagine. The final dish is always so tender and rich. Tagine cooking rocks.

I love the flavor combination and all the colors you have on the plate!

A small fire! Now that makes things exciting in the kitchen

I was lucky enough to get leftovers for lunch. Wonderful, warm flavors; a comforting dish. I hope you make it again. ;-)