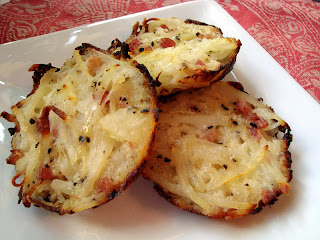 As part of the Foodbuzz Tastemaker program, we were sent two coupons to try Simply Potatoes brand products for free. When we saw their Shredded Hash Browns in the refrigerator section, we knew we would look no further. Those shredded potatoes were headed straight to our muffin tin where they would soon become our "Cheesy Pancetta Hash Brown Bites."
What's yummier than potatoes mixed with pancetta and cheese? Not much other than not having to share! This recipe made two dozen individually-sized "bites" which were both easy to make and to serve. Having the potatoes already shredded was a huge time-saver. Browning nicely in the muffin tin, they have that crispy-on-the-outside, tender-on-the-inside texture that everyone adores. These are the perfect accompaniment to any meal, and are particularly delicious as a "bed" for a fried egg. Since the recipe makes so many, they'd be great for entertaining, or can be frozen and reheated for another time. 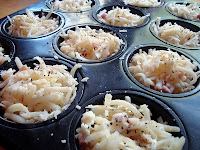 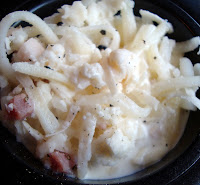 Add half-n-half, and bake.
Go ahead and give them a try. And experiment a little! Try a different cheese, throw in some sauteed onions and peppers. Let us know how you like 'em! 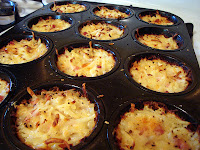 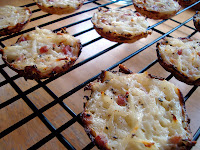 Coming out of the oven, nicely browned and crispy! 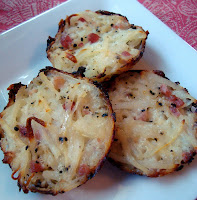 Cheesy Pancetta Hash Brown Bites
Ingredients:
1 package Simply Potatoes Shredded Hash Browns
4 ounces diced pancetta
1/2 pound gouda cheese, shredded
2 1/2 cups half-n-half
kosher salt and freshly ground black pepper to taste
Preheat oven to 400 degrees. In a large bowl, mix together the potatoes, pancetta and cheese. Fill the cups of two muffin tins with this mixture. Place a pinch of both salt and pepper into each cup. Then pour 1 1/2 tablespoons of half-n-half into each cup. Cover loosely with aluminum foil and bake at 400 for 15 minutes. Remove the foil and bake for an additional 25 minutes, or until nicely browned. Allow to cool for five minutes before removing from pan. Serve hot.
Posted by Amy at 5:31 AM

I buy those bags of shredded hash browns all the time for my kids. I'll have to try this recipe to change things up a little. I am sure they will love it!

Yum! What a great idea! Easy way to make hash browns, love it! Plus you can never go wrong with pancetta & gouda!

These look SO GOOD!! And easy too - I love the idea of using the muffin tins... So smart. Thank you for the recipe!

Whoa! Those sound super delish. It's easy and I can already taste the flavors. I'll leave out the meat and enjoy just the same. Great recipe.

Ohh, these little bites look amazing! I could go for some right now!

Easy and delicious! And they also look great. This would make a great side for some dinner with guests!

Throw a fried egg on the side, and it's breakfast time!

Fantastic!! When my son saw these all he said was "Why haven't we made these yet?" I guess I will have to make these!!