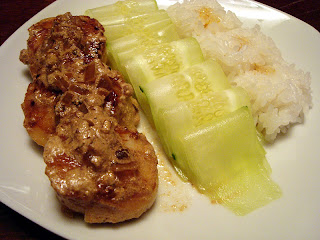 After accepting an invitation to OpenSky, we purchased two unique ingredients being promoted by chef Ming Tsai. Those ingredients were a) expensive, b) not able to be found anywhere where we live, and 3) things we've never cooked with before. They are black garlic and yuzu juice. When the package arrived, we were so excited we wanted to try them right away. This is our cautionary tale...
First, a description of the ingredients in case you've never tried them. Black garlic is garlic that has been fermented at a high temperature for several months until it turns black. It has a soft, paste-like texture similar to a dried apricot. We found its flavor to be like sweet molasses mixed with the tangy zip of garlic without the acidity or pungent odor. Yuzu is a tart and sour citrus fruit that is rarely eaten as-is but the juice and rind of which is often used in Asian cuisine. Very interesting indeed. 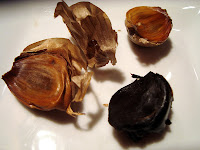 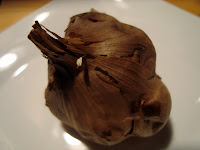 Since it was our first time using either of these exotic ingredients, we decided to try the recipe suggested by Ming Tsai in the promotion, namely, his Black Garlic Scallops with Yuzu-Cucumber Salad. We followed the recipe almost exactly, differing only by using about half the amount of Greek yogurt called for, and we served it with some sushi rice. 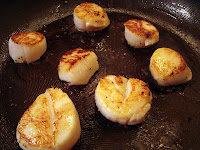 In the end, all we can say is, "Really?!?!?!?" Honestly, it was terrible. Perhaps the worst thing we've eaten in a long time. The yogurt took on a thick, curdled-like consistency ruined the whole dish. And we used half the amount! While our scallops were cooked perfectly, the so-called "sauce" that they were in was nearly inedible. And there was not enough sweetness anywhere in the recipe to balance the intense sourness of the yuzu juice. It was heart-breaking to see such beautiful (and expensive!) ingredients ruined in this way. We just don't get it. 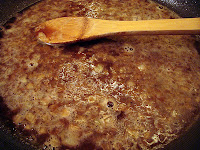 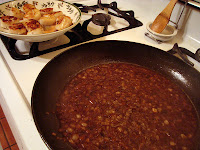 We can say we had a good time plating the dish. We tried two different styles: Chris made thin ribbons out of his cucumber "salad" and served the scallops on the side, while I decided to slice them thinly and use them as a bed for the rice and scallops. After all was said and done, we scraped the "sauce" off the scallops to eat them, and ate the rice and cucumbers together. We were both hungry and disappointed by the time "dinner" was over, and we had no idea whether not we like black garlic OR yuzu juice!
Although we'll give you the recipe (which we got here on the OpenSky website), we do NOT suggest trying it! If you have any other suggestions on how to use our black garlic or our yuzu juice, please let us know.
Black Garlic Scallops with Yuzu-Cucumber Salad
Cooks' note: the slight changes we made are noted*
Ingredients: 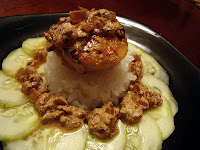 12 large scallops
1 medium onion, minced
4 cloves of black garlic, minced
1 cup of white wine
1 1/2 cups of Fage non-fat Greek yogurt
*(we used 3/4 cup)
1 English cucumber, cut into 1/4-inch slices
*(we used a regular cucumber)
2 tablespoons of Yuzu juice
Kosher salt and pepper
Canola oil for cooking
*(we used olive oil)
Heat saute pan over medium-high heat. Add oil and swirl to coat the bottom of the pan. Season scallops with salt and pepper. When the oil is hot, add scallops and sear on each side, about 2-3 minutes per side. Remove scallops from the pan and set on a paper lined plate. Add more oil if needed to coat the bottom of the pan. Add onion and black garlic and saute until soften about 2-3 minutes. Add wine to deglaze the pan and simmer until the wine has reduced in full. Reduce heat to low, add yogurt and stir until incorporated. Add scallops back into the pan, toss to combine and check for seasoning. Meanwhile in a small bowl combine the cucumbers and yuzu juice, season with salt and pepper and toss to combine.
Posted by Amy at 11:27 AM

Good to know! I've never seen black garlic before, seems like a cool ingredient to use in an entirely different dish. :)

Thanks for the explanation of yuzu and black garlic. Your scallops look wonderful...too bad the taste didn't match their appearance.

So sorry this didn't turn out for you guys!! I've never heard of black garlic! Big props for trying out this challenging dish!

What a bummer the flavor didn't match the plating!

Oh I havent bought anything from Open Sky yet. So sorry your dish didnt come out like you envisioned. :( It sounded delish though!

I've done a couple of recipes with black garlic and I'm obsessed with yuzu, which is called yuja in Korean. Without sounding like a spammer, come check out my website (http://www.koreaforniancooking.com/) and you'll find a few recipes that might rescue your black garlic and yuja juice from the trash can.

i just made my own black garlic,
it is not thtat easy and highly energy consume, not surprising they quite pricey...
from 20 cloves, i just success with 6 of them!
http://dentistvschef.wordpress.com/2013/01/18/super-food-black-garlic-fermented-pan-seared-scallop-ala-dentist-chef/