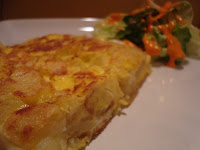 Amy's coworker Marcy has chickens and sells beautiful large fresh brown eggs. They are so different from store-bought that the $2.50/dozen is an excellent value. We bought some the other day and thought they'd make a great ingredient for Meatless Monday. But what to do? The answer was found in The Best of America's Test Kitchen: Best Recipes and Reviews 2011, on the page featuring Spanish Tortilla, or Tortilla Española.
At its very basic, this "tortilla" is an omelette with potatoes and onions. However, the potatoes are cooked in just the right amount of oil to be tender and melting in your mouth, and the omelet, made with eight fresh eggs, is velvety yet dense enough to cut into cubes or squares. That is what makes this popular at most tapas bars.
We followed many of the tips from ATK, such as, using Yukon Golds ("starchy enough to become tender but sturdy enough to stir and flip in shallow oil without crumbling"), using less oil than traditional recipes ("typical recipes call for simmering potatoes in 3 or 4 cups of extra-virgin olive oil"), making the tortilla in a 10-inch nonstick skillet, and notes on how to flip the tortilla. But, as always, we put our own spin on the recipe. Here's what we did.
Ingredients:
6 1/2 tablespoons extra-virgin olive oil
4 medium Yukon Gold potatoes, peeled, quartered lengthwise, and cut into 1/8-inch slices
1 medium onion, halved and thinly sliced
salt and pepper to taste
8 large eggs
Toss 4 tablespoons of the oil, with the potato, onion, salt and pepper in a large bowl until potatoes are well coated. Heat 2 additional tablespoons of the oil in a 10-inch nonstick skillet over medium heat until oil is shimmering. Add the potato mixture to the skillet. Cover and cook, stirring with a rubber spatula every 5 minutes, until potatoes are tender, about 25 minutes. Meanwhile, whisk the eggs with about a teaspoon of salt in a bowl until combined. Fold the potato mixture into the eggs, scraping the skillet clean. Add 1/2 tablespoon of oil to the skillet and return it to the heat. When the oil is shimmering, add the egg-potato mixture and cook, folding the mixture and shaking the pan for 15 seconds. Smooth the top, reduce heat to medium, cover and cook for two minutes, gently shaking the pan every 30 seconds. Using a rubber spatula, loosen the tortilla from the skillet, shaking the pan until it slides around freely. Slide the tortilla onto a large plate. Invert the tortilla onto a second large plate and slide it bak into the skillet, browned side up. Continue to cook for two minutes longer, gently shaking the pan every 30 seconds. Slide onto a cutting board and allow to cool. Serve at room temperature with a side salad for a light and simple dinner, or cut into smaller pieces and serve as tapas.
Posted by Amy at 9:39 AM

I love Tortilla Española. It is truly one of those items that can be enjoyed at any time of the day.

The first restaurant I ever worked at was a Spanish Tapas bar. My favorite dish? Tortilla! Yours looks fantastic!

All you need is this and a simple salad, and it's dinner. Or lunch! Roasted peppers are nice in there too.

Reminds me of Spain! One of our favorites when we were there. Thanks so much for your post on or blog and especially for adding us to your blog roll! It's a wonderful compliment to be in such good company. Keep the great recipes coming!