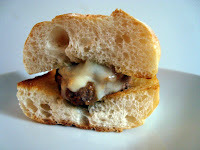 A few days ago, we received two complimentary jars of Pace Picante Sauce and a challenge to create a recipe using the sauce that would be perfect for a Super Bowl party. What fun! We decided to mix the picante sauce with ground beef and make sliders stuffed and topped with pepper jack cheese. After delivering them to our football-fan neighbors, we realized we had a hit on our hands, and vowed to use the second jar to bring another batch to the Super Bowl party. Serve these sliders on your favorite bread or bun; we tried them on Portuguese rolls and three-cheese bread and both were yummy. Thanks to the Foodbuzz Tastemaker Program and Pace for the SUPER ingredient that really spiced up our sliders! 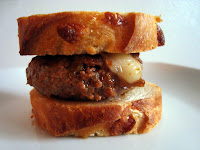 Ingredients:
(makes 16 sliders)
1 1/4 lb. ground beef
1 8-ounce jar Pace Picante Sauce (mild)
1 teaspoon kosher salt
1 teaspoon coarsely ground black pepper
1/2 lb. brick pepper jack cheese, halved then sliced
additional salt and pepper to taste
buns, rolls, or bread cut to slider size
In a large bowl, mix the ground beef, picante sauce, salt and pepper. Using your hands, form the beef mixture into small slider-sized patties. Flatten each slider slightly, top it with cheese, and re-form the slider so the cheese is stuffed inside (see photos below). Season the top of each slider with additional salt and pepper. Heat a skillet or grill to high heat. In small batches, grill the sliders about four minutes on one side. Flip each slider and top with additional cheese. Cover the sliders in the pan to steam them while they are grilling on the second side. When cooked to preferred doneness, serve on bun, roll or bread, toasted or grilled if desired. 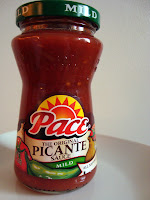 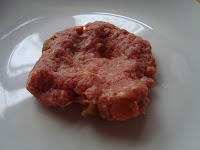 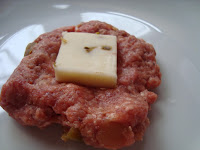 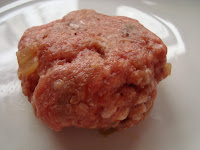 Re-form into slider-sized patty
Posted by Amy at 3:13 PM

Simple and tasty. Thank you for sharing.

Cheese-stuffed sliders? Brilliant. So simple yet tasty, you definitely have a winner on your hands.

Love hot sauce like this and with the meat fabulous idea. We really could have done with these yesterday at the France vs Scotland rugby match at the Stade de France. The cold winds were saying, picante pepper jack sliders!

I love it! I mean, they are stuffed with cheese! And a kick of picante sauce... mmmmmm...lucky neighbors.

Yum! If I didn't have my menu all set for tonight, I would have loved to include these!

Simple, but flavored packed. That is a winner every time!

Amy, another good link for Food on Friday, thank you. Cheers