Meatless Monday: Scarborough Fair Pasta, or A Pasta for Your Valentine 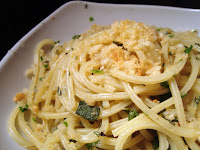 Amy writes:
Are you going to Scarborough Fair?
Parsley, sage, rosemary and thyme,
Remember me to one who lives there,
She once was a true love of mine.
-Simon and Garfunkel
The ancients strongly believed in the power of herbs: for hurting or healing, for enchanting or repelling, for life or death. While listening to the Simon and Garfunkel song Scarborough Fair on the radio, I started thinking about the power of the four herbs parsley, sage, rosemary and thyme. Then I started to do some research. I used the internet at first, and then I remembered a book I have (yes! an actual book! with paper pages!) called Leaves in Myth, Magic and Medicine by Alice Thomas Vitale. This is what I learned. The Greeks and Romans both believed parsley (Petroselinum crispum) to be an aphrodisiac, and its stalk was used for creating love potions. Sage (Salvia officinalis) was such an important herb to the ancients that they believed it could conquer death and proffer wisdom (hence the English definition of sage: a profoundly wise person; a person famed for wisdom - from dictionary.com). According to Vitale, "In the ancient world rosemary (Rosemarinus officinalis) was considered an aid to memory," its rejuvenating properties caused it to be used in beauty potions, and, "...small sprigs inserted into a bridal bouquet ensured a happy marriage." Finally, the scent of thyme (Thymus vulgaris) was deemed so irresistible that a line from a fifth-century B.C. Greek drama referring to the herb reads, "Who could forbear to kiss / A girl who's wearing this?"
Hmmm...lust, wisdom, memory and irresistibility...sounds like a love potion in the making, and Valentine's Day is drawing near. Unable to pick these herbs from our covered-in-80-inches-of-snow-garden, I bought them at the market with the intent of making a meatless (it's Meatless Monday!) dish that would be perfect for my Valentine, my husband Chris. Thus we bring you "Scarborough Fair Pasta," or "A Pasta for Your Valentine." Fragrant. Spicy. Garlicky. Herby. It would be a great primi piatti (first course) for any romantic Italian dinner, we think (wink, wink). 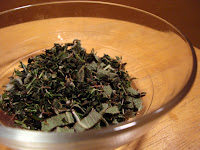 Ingredients:
1 tablespoons butter
3 tablespoons olive oil, divided
1 clove garlic, chopped
1/2 cup panko-style breadcrumbs
1/2 pound bucatini, spaghetti rigati, or other thicker, longer pasta shape
1 tablespoon chopped fresh sage
1 tablespoon chopped fresh rosemary
1 tablespoon chopped fresh thyme
1 teaspoon kosher salt
1/2 teaspoon ground pepper
1/2 teaspoon red pepper flakes
1/2 cup chopped fresh parsley
1 teaspoon lemon juice
2 tablespoons grated parmesan cheese
Fill a large pasta pot with water, salt it, and set it over high heat to boil. In a large skillet, melt the butter with one tablespoon of olive oil over medium heat. Add the chopped garlic and stir for one minute, taking care not to burn it. Add the panko and cook, stirring often, about five minutes, until toasted. Transfer the breadcrumb mixture to a separate bowl and set aside, keeping skillet out. Prepare pasta in boiling water according to package directions. When ready to drain, reserve a cup of the pasta water for later. Return the skillet to medium-low heat and add the second tablespoon of olive oil. Stir in the chopped sage, rosemary and thyme, season with salt, pepper and red pepper flakes. Cook for a minute, then add the pasta to the skillet and stir to combine. Add enough of the pasta water to moisten the pasta, then and the last tablespoon of olive oil and toss until coated. Add the chopped parsley, lemon juice, and parmesan and give it a final toss until well combined. Top with the garlic breadcrumbs and enjoy it with your Valentine, anytime.
Posted by Amy at 11:22 PM

Love all that background on the herbs! I feel smarter--and hungry--after reading.

Love this recipe! Love pasta, in general! This recipe is very much like a tapas plate that I had in Barcelona. There was one more herb in there, though. Mint. Believe it or not, it really added a sweet touch. Love your post! So much history and botanical knowledge brought to us!

Susan, thank you! Mint would be an interesting addition!

mmmmmm I think I can smell those herbs all the way here. That dish would make a great v-day dinner...my husband would definitely love it!

mmmm...so herbacious! Sounds and looks delish! Thank you for sharing all of that history of the herbs...great looking dish!

Love this, my hubby loves making Scarborough Fair Grilled Chicken:) The flavors are soooo wonderful, I can not wait to try this recipe:)
Take care,
Terra
www.cafeterrablog.com

Who could forbear to eat these herbs in such a tasty treat?

Lovely Pasta, who new parsley was an aphrodisiac...I love to use tones of herbs when I cook, it makes everything extra delicious.

Delightful way to celebrate Valentines and Meatless! Thanks so much for posting this!