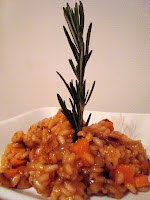 There are moments, albeit few and far between, in every home cook's life when she is pretty impressed with herself. I had one such moment tonight with this week's Meatless Monday recipe "Sweet Potato Risotto with Spicy Maple Glazed Walnuts."

Let me give some important background details. To start with, "meatless" has never really been my thing. I love meat. Of all kinds. But I know that a healthy diet must be balanced, and I know I need to try new things, and I know that going meatless once a week isn't going to kill me (quite the opposite, actually, right?).

Then there's risotto. Regardless of the fact that I once took a cooking class in Rome and have always felt that Italian cooking was one of my "things," I had never made a risotto until I met Chris. Chris taught me the art of making risotto. Or maybe he taught me the skill of having the patience to make risotto. Or maybe he just always makes the risotto when we want to have it at home. Or maybe it's a mixture of all three of these.

Finally, the sweet potato. It's only within the past couple of years that I've become a fan of this interesting tuber that to me seems so unlike its distant relative the "actual" potato. My mom never made it for me when I was a kid, and it became one of those things I was convinced I didn't like because, frankly, I had never really tried it. Chris loves the things, and kept nagging me to try them, and to cook them. Then last year, we made these amazing little Sweet Potato and Pancetta Gratins, and I was pretty much hooked.

Which brings me to the point that I've been thinking about risotto and Meatless Monday and sweet potatoes for about a week, and this recipe is the end result. It was ready to be served about five minutes after Chris walked in the door, home late from work. He took a bite and I waited. Then, the verdict: "This is one of the best risottos I have ever had." He asked what I did and we picked it apart as if we were our own judges on Top Chef. Sweetness? It has it - from roasted sweet potatoes and hints of maple syrup. Spiciness? Also there - a bit of cayenne in the walnuts puts some heat on the tongue that along with the cinnamon gives warmth and depth to the dish. Herbs? Can I ever make anything without them? I thought rosemary would go nicely with the other flavors, and I was right! And what about textures? Indeed - creamy risotto, crunchy walnuts, soft onions. It's one of the best risottos we've ever had.

Tonight, I guess, the student has become the teacher. And I remain pretty impressed with myself.

For the spicy maple glazed walnuts:

Place the walnuts in a large skillet over medium heat. Add the salt, cayenne, cinnamon and pepper and cook 1 minute or so until spices become fragrant and nuts begin to toast. Add the maple syrup and swirl the walnuts in the pan until they are well coated with the spices and syrup. Pour onto a cookie sheet and set aside to cool.

Heat the oven to 400 degress. Spread the diced sweet potatoes in one layer in a glass baking pan and drizzle with one tablespoon of olive oil. Toss to coat and roast for 1/2 hour. Meanwhile, pour the vegetable broth into a saucepan and place over medium-low heat to become warm. In a large skillet, heat the olive oil and butter over medium heat. Add the chopped onion and a pinch of salt and cook until onions become translucent. Add the rice and continue to cook until rice starts to toast. Add the warm vegetable broth to the rice one ladle at a time, stirring constantly, and waiting until all the broth is absorbed by the rice before adding more. This could take up to one-half hour. When the broth is gone and the rice is done (not too firm, not too mushy), stir in the chopped rosemary and season with salt and white pepper to taste. Fold in the roasted sweet potato pieces and spiced walnuts, then turn off heat. Add the maple syrup, stir so that everything is well combined, serve and enjoy! 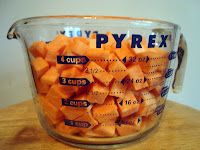 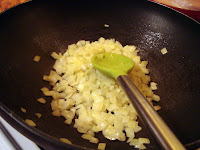 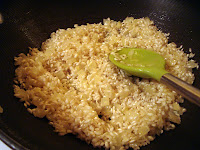 Add the rice and cook to toast 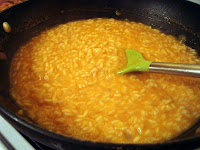 This sounds yummy! Why carnoli rice? I don't think I've ever seen that in the grocery store and I always use arborio. Is there a difference in the final product?

We often use arborio as well, but carnaroli has a slightly higher starch content and firmer texture. We wanted the firmer texture because of the softness of the sweet potatoes.

Perfect Meatless Monday offering. The risotto sounds perfect. Great blend of sweet and spicy. It's almost like a dessert risotto. :)

This whole dish is totally up my alley. I love all the flavors and ingredients. I'm curious about this other rice now. Hope you have a great day.

lol @ you two pretending like you were on top chef - my hubby and i do the same thing : j this dish looks lovely!

Yay, Me, for getting to taste this dish! (I am so very lucky to be close A&C and get to try their dishes.) This was a Fantastic Dish. The flavors and textures were wonderful. The rosemary really worked, the sweet potatoes were cooked perfectly, the walnuts added a perfect bit of crunch. All around a "well balanced and executed dish!" ;-) (if we're going to be all chef-y and judge-y)
Thanks again for saving some for me!
@ Duo Dishes...not really sweet enough for dessert, but a small portion would work well alongside some roasted turkey to conjur up Thanksgiving...

I meant conjure up...

Wow. This has just been bumped to the top of my list of recipes to try next week.

This post made me grin ear to ear! I eat meatless everyday and sweet potatoes are one of my favorite foods and I've been on a flavored nut kick! So, when I saw your recipe, I was besides myself with excitement!!! LOL! Thanks for sharing!

This sounds so tasty!! I love the flavors (sweet/spicy) you have in the risotto. Congrats to you that the dish turned out absolutely perfect!

This is a delicious take on risotto, can't wait to try it. Love the flavor of rosemary with the sweet potato and the walnuts add a great texture, too. Really really nice. Thanks for sharing this!

Woot! Woot! I have been all about the maple syrup connection! This looks like a keeper ... risotto is next to mac and cheese in my book. Add that springtime maple syrup and it's a match made in heaven!