Tomato Bread Pudding (aka Rachel Ray FAIL, or DON'T Try This at Home)

Amy writes:
Monday was the first day back for teachers, and while most of you don't have sympathy for us, and only a few of you have empathy for us, we were tired. It was only professional development, but it was exhausting to hear how the new plan, based on state guidelines, of how we teachers are going to be "rated." I'm not going to go into that. But Tuesday was the staff potluck bar-b-cue and on the way home from school on Monday, I couldn't even bring myself to stop at the store. 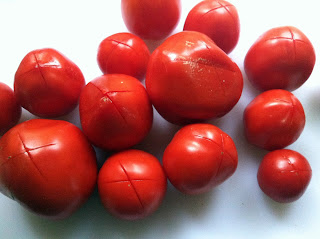 I got home, changed into pajamas, and wandered around the kitchen, racking my brain wondering how I was going to keep up my culinary reputation among my co-workers when I had almost no ingredients and no creative energy. Then I spotted that loaf of Italian bread I just had to buy on Saturday that was so far untouched. I could make a bread pudding (please, Lord, let me have some milk and eggs). 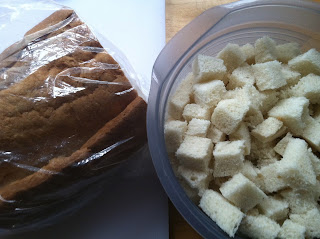 Of course, the milk was spoiled and while Chris wasn't yet home, so could stop for me, by this time I had my eye on the pile of garden tomatoes (some ours, some from the neighbor) on the windowsill and the wheels started turning. Is there such thing as tomato bread pudding? 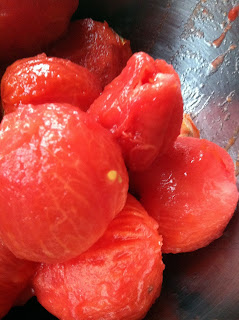 An Internet search turned up a few interesting recipes that I thought I could rely on: one from Giada, which sounded very good but seemed a little complicated on this particular evening; one from Geoffrey Zakarian, whom I adore and think is a genius, but that one sounded more like a bread salad, and I had made that last year; and one by Rachel Ray. 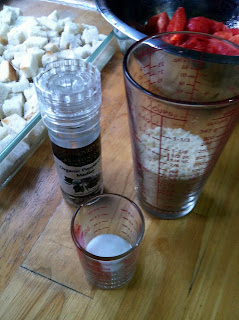 Now, I don't mean to offend anyone here, but, to put it mildly (or, perhaps, to understate it), I am not a fan of Rachel Ray nor have I ever been. I don't like her forced perkiness, I can't stand those too-cutesy names for foods she makes up (e.g. "stoup" and "sammies"), and I firmly believe that really good food takes longer than 30 minutes to make. But I ignored my instincts out of sheer weariness and the desire for a relatively easy, quick recipe that used what I had on hand (namely, butter, old bread, and garden tomatoes). 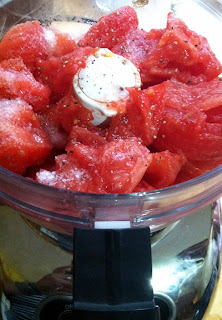 I followed her recipe to the letter, other than doubling it to make a portion fit for a crowd. I took a long look at it before I put it in the oven. It's old bread, tomato puree, a little salt, a little sugar, a little pepper, some butter and cheese. Where was the real flavor going to come from, I wondered? It needed herbs, at the very least, so I sprinkled it with Italian seasoning and called it a night. As it cooked, it smelled very good. When it came out of the oven, it looked pretty good. I stole a small corner piece to taste. It tasted like soggy-ass pizza. So nasty that I refuse to include the recipe here because I really don't wish this on you. What a waste of some gorgeous tomatoes! Wah! 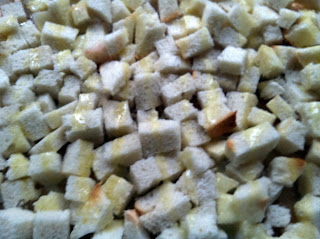 I re-checked the recipe and realized it wasn't me. I hadn't made any errors, had even added flavor to it, and now there was nothing else to be done. I cooled it, chilled it, brought it to school and served it at room temperature. Most unusually, but certainly not unexpectedly (especially after that icky taste test), not a single person asked for the recipe. Really, dear readers. Don't try one this at home. 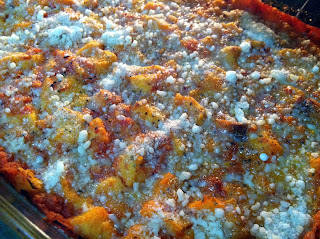 Thanks for nothing, "Ray-Ray." Next time, I'll have Chris stop for milk.

I thought I was the only person who didn't like Rachael Ray. Your sentiments are mine exactly. Thanks. Won't try this recipe. Didn't even look appetizing.

Thought I was the only person living that doesn't like Ms. Ray. The recipe looks awful. Thanks for a great wake up this morning. Made me smile.

As I told you honestly at that luncheon, it tasted like cold pizza...which some people like, but doesn't require all the trouble.

You are too funny. I don't understand how people can even listen to Rachel Ray. There is something wrong with someone that happy all the time. I love this story. Probably because it sounds exactly like me from the bread I must have (that no one will touch) to the spoiled milk and the pj's I put on as soon as I walk in the door. "Soggy-ass pizza" cracked me up. Thanks for that.

Sadly, I couldn't agree with you more re: Rachel Ray.
It's a tragic commentary on the society we live in, that she is a star (especially a culinary star when she has no real culinary background), and yet teachers, who I believe are real stars and should be honored, are denigrated.

Gisele - Both of us appreciate your latest comment so much!