A Taste of Bermuda

Whenever we travel, we make a point of eating as the locals do, trying local dishes and ingredients, and generally celebrating the local culinary culture. So, although we were in Bermuda for only a couple of days, we made sure to try both the dish and the drink that have made Bermuda famous. 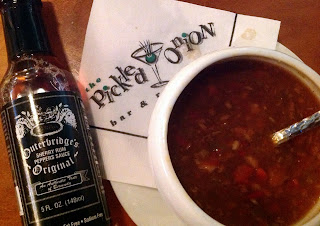 First, the national dish of Bermuda: Bermuda Fish Chowder. We enjoyed this peppery chowder at The Pickled Onion, a chic restaurant and bar on Front Street in Hamilton. Drinking quotations adorned the walls and Outerbridge's Sherry Peppers Sauce festooned the tables. The waitress offered us free WiFi, a treat since we had been at sea on a cruise for the past four days. Although Amy took a huge digger in the bathroom (sober and all!) that resulted in a ginormous bruise, the afternoon was more memorable for the chowder. Vastly different from our New England version, this chowder had a dark, rich color with flavor to match. The addition of black rum and sherry peppers gave it a robust kick. We will be giving this recipe by Gosling's Rum a try very soon, having purchased the requisite Outerbridge's to take home with us. We'll let you know if we get at all close to the original. 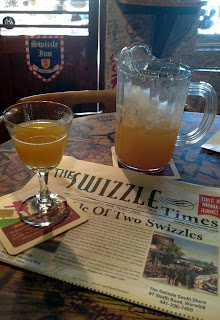 Secondly, the national drink of Bermuda: The Rum Swizzle. We partook in this legendary punch-like cocktail at The Swizzle Inn, known as the home of the Rum Swizzle, but also Bermuda's oldest pub. The drink is a combination of rums including Gosling's Black Seal, fruit juices (specifically orange, lemon and pineapple), and other "secret" ingredients. The gift shop at The Swizzle Inn sells a powdered drink mix for those who wish to try some at home, but we were happy enough to enjoy them in their native setting. Neither too sweet nor too strong, this drink made us happy to "Swizzle Inn...Swagger Out." Delightful! 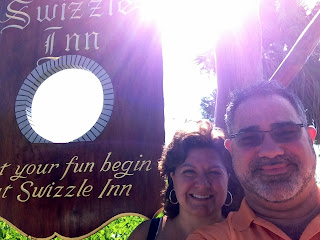