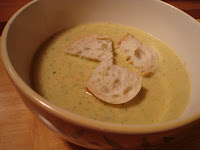 Hey All! Chris here. It’s been a looong time since the last time I posted and being that I am the “omnivore with vegetarian tendencies” part of A Couple in the Kitchen, Amy thought that I should do today's Meatless Monday post. Let me start by saying that I haven’t made Cheese and Broccoli soup in about 15 years and that Amy has never tried it. (She is not a big fan of either cheddar or broccoli.)

This recipe is based off of my fantastically diminished memory, a conversation with a chef and a quick gander through some old cookbooks. After incorporating what I had learned with what I had available in the fridge, the end product didn’t turn out that bad. The only thing I would have done differently is to use a MILD cheese versus the aged sharp cheese that I knew I shouldn’t have bought, but had to because it looked so good. I included the change in the recipe.
Ingredients:
1 T unsalted butter
Celery, 1 stalk
White onion, medium
Carrot, medium
1 T flour
2 cups veggie broth
3 cups chopped broccoli
½ cup of milk
½ cup heavy cream
Mild cheddar cheese, slightly less than a pound
1/8 t Nutmeg, optional
Directions
Cut the carrots, onions and celery into thin slices. Place into saucepan on medium heat with 1 T unsalted butter. This little mixture is going to be the base of the soup. Most people call this mix a ‘mirepoix’ (mare-a-pwah)  but technically it should be a fine/small diced 2:1:1 mixture (heavy on the onion) before you can ‘officially’ use that word. Personally I just like to say the word. Repeat after me, “mirepoix”.  Pretty fun huh?  OK, back to cooking.
Once the onions are beginning to go transparent, add the flour. You are doing this to give the fats in the milk and cheese you are going to add later something to bind to. Not doing this can lead to the separation of the fats from the milk and this, well, ruins everything. So don’t do it. Remember the flour.
After the flour has been absorbed (you have to stir it around a bit) add the broccoli to the mix. The water content in the broccoli is going to cause the pan to sizzle and steam a little. This is good. You want to use that released vapor to steam the broccoli. Gently stir the mix around a few times over the next few of minutes. Taste a piece of the broccoli to see if it’s done yet. Don’t be afraid, it will not be too hot. It should be firm, but not hard (also known as ‘al dente’). Don’t be overly concerned if you miss this mark since everything is going to end up in a blender very soon. If you want your soup to be a little more on the creamy side then let it steam longer but NOT to mushiness. Personally, I like a bit of broccoli grit to remind me of what I am eating.
Once your optimal broccoli texture has been achieved, add the broth followed by the milk/cream. Adding the broth first helps reduce the temperature of the pan making it less likely for the milk/cream to scald. If you happen to scald the milk I recommend ordering a pizza since there is no way to get that burnt taste out of a soup. If you make it a broccoli pizza it will almost be like the soup, but not really. If you are really lucky, your date won’t notice the difference.
Now comes the fun part – the immersion blender. If you only have a real blender that’s OK, it’s just not as much fun. Regardless, let the mix do its thing for a minute before using a blender to chop the lot into a smooth greenish liquid before adding the cheese. I tried to grate the cheese but, how can I say this, had an issue with the grater. I ended up chopping the cheese into small pieces with a knife and throwing away the grater. Anyhow, slowly add the cheese to the soup while stirring until the lumps disappeared. You may have to increase the heat under the pan depending on the temp of the liquid. I can remember adding nutmeg to give it a little warmth and added flavor, but it could have just been my college palate that made me think it was good.
Eat with crusty bread and Enjoy!
Summary:
Mirepoix with butter
Add flour when onions are translucent; stir until flour is absorbed
Add broccoli; let steam for a few of minutes
Add liquids; 2 cups veggie broth, stir, then milk/heavy cream mixture
Immersion blender until desired consistency
Add cheese, stir until smooth
Nutmeg is optional
Crusty bread is a must.
Posted by Amy at 11:42 PM

OMG I am laughing. That reporting, replete with side bars and is so ADD--I mean Chris! You circled the airport but landed the plane. YAY. Thank goodness for the summary. No offense Chris, but maybe you do the comments and leave the recipes to Amy. :)

And the soup? I make a similar soup sans cheese (and celery) and with a couple of cloves of garlic. Yum.

of late, I am on the look out for soup recipes and this should work out great for me! thnx for sharing

Can't believe she doesn't like cheese and broccoli soup! It's so yummy! :)