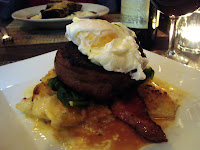 It was payday Friday, and thus, Date Night! We chose to stay local and try one of Manchester's newest places, CW's Chops 'n Catch. Corey Wry (CW) was raised here in the "Silk City" and has two popular restaurants, Pastrami on Wry (breakfast, soups, sandwiches) and Corey's Catsup and Mustard (a burger bar). He opened Chops 'n Catch last month with the tagline "a local place for steak 'n fish 'n comfort."
Awkward name aside, the menu is inviting, and certainly the type of thing we could use "this side of the river," where breakfast and lunch joints abound and one has to go to a chain restaurant by the mall to get a decent steak. On his menu, Corey claims his goal is "to use locally produced and seasonal food from regional farms and fisheries as much a (sic) possible." Local items are marked with a green icon in the shape of the state of CT, but they are few and far between, and we hope to see more of them as the restaurant comes into its own. 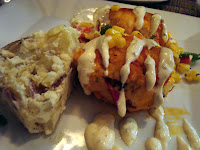 Lobster Cakes
There are plenty of "chops" (steaks, kabobs, pork, veal, chicken, lamb) and "catches" (oysters, shrimp, haddock, mahi, salmon, cod, tuna) from which to choose. We started with the lobster cakes, which had plenty of chunks lobster meat and very little filler. They were served with a sweet corn salsa, a scoop of red potato salad and a zippy remoulade sauce. They were seasoned well and very tasty, but could have been a tad hotter. 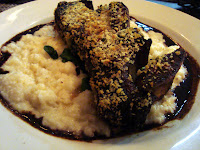 Dr. Pepper Braised Short Rib
﻿
﻿For the main course, we both chose to try one of the "signature entrees." The Dr. Pepper Braised Short Rib had a lot of flavor but had some gristly parts and was a bit dry for a braised meat, with the cilantro-breadcrumb topping only making it drier. The grits over which it was served were perfectly cooked, however, and we loved the Dr. Pepper reduction. Chris got the Steak 'n Eggs, an ancho-coffee rubbed filet served over scalloped potatoes and bacon, and topped with a poached egg. The steak, while very tender, could have used more seasoning, but the remaining components were well cooked, well seasoned and made for a great plate we could have enjoyed anytime of day.
We love the fact that the wine list included some local stars from CT and Long Island, and ordered the Cabernet Franc from Jonathan Edwards in North Stonington, which paired nicely with the meats. We were too full to try dessert, but a couple of them sounded tempting indeed.
The service was good; our server was friendly and attentive without hovering, but things happened very slowly. The manager stopped by to check on things, which is always a nice touch. We liked the decor, with its dim lighting and typical shades of brown one finds at a steakhouse, accented here with bright blue ocean-themed watercolors. The floor, a somewhat dingy black and white checkered linoleum, could use an update from the location's Nulli's days. Also, there was a lingering scent of frying oil, as one usually finds in bad Chinese take-out joints, that was strong enough to stay on our clothes after we left - not good.
Overall, it was a decent meal with more ups than downs. And since they've been open only three weeks, we're going to give them some time to work out the kinks and then try another visit.

It's clear you want them to succeed. Generous of you.

And it seems, according to The New York Times, that after 2 years, not much has changed:
http://www.nytimes.com/2013/04/28/nyregion/a-review-of-cws-chops-n-catch-in-manchester.html?partner=rss&emc=rss&_r=0