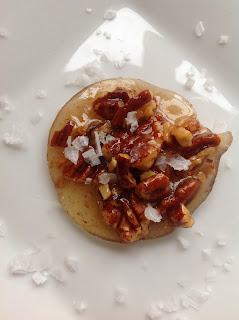 We are heading to New Orleans for a few days after Christmas and while we're there, we always pick up some freshly made pralines from Southern Candymakers in the French Quarter. But we wanted a praline-style candy to include in our gift packages this year, and settled on another Martha Stewart recipe, Pecan Sea-Salt Drops. 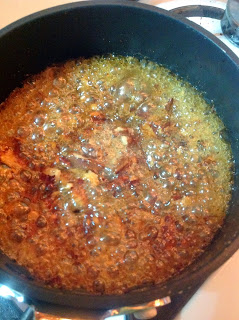 A praline without the cream and butter, these drops consist of chopped pecans in a crunchy caramel sprinkled with sea salt. Martha suggests using a mini-muffin tin, and we tried them first in one, but then we tried a regular sized muffin tin and liked the look much better. What's great about these candy drops is not only the salty sweetness but also the pretty elegance. 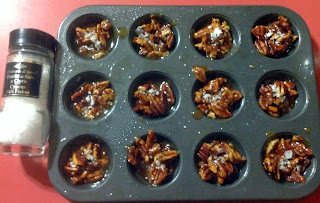 Coat the cups of a muffin tin with cooking spray. Bring sugar and corn syrup to a boil in a medium saucepan. Cook, swirling occasionally, until mixture becomes golden around the edges. Stir in pecans and cook, stirring occasionally, until mixture is pale and amber-colored, about 8 minutes. Spoon mixture into muffin cups, about 1 tablespoon each, and immediately sprinkle with sea salt. Let cool completely, then remove from tins. Store in an airtight container.