As we are about to leave for one last huzzah (a week on the beach in Maine sans computer!!!) before we teachers have to go back to The Place That Must Not Be Named, we'll leave you with a few tidbits from our recent trip to New Orleans. We had eaten dinner the previous night at Restaurant R'evolution and should have still been full from that, but when we're in the Big Easy, we seem to have hollow legs, so the next afternoon, we went to Domenica, a John Besh restaurant at the gorgeous Roosevelt Hotel. 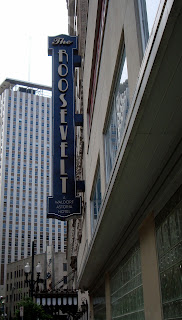 The hotel is one block off Canal Street and is an impressive sight to behold. The Art Deco style permeates the building that opened as the luxurious Grunewald Hotel in 1893 and stretches an entire city block still. An ambitious renovation project post-Katrina has restored it gloriously, and the addition of a top chef's restaurant adds to its allure. 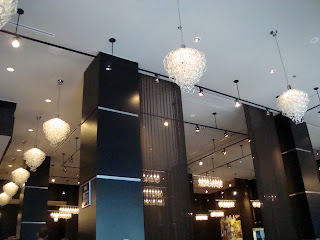 But Domenica (which means "Sunday" in Italian) is casually elegant rather than snobbishly so. Sparkling chandeliers hover over espresso-colored wooden tables where each placemat also serves as the menu. The menu highlights homey Italian specialties (pizze, salumi, antipasti, pasta, panini, dolci) with a contemporary chic touch, all the while focusing on the bounty and traditions of the American South. In other words, it's John Besh doing Italian and doing it well. 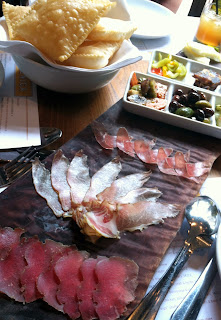 The chef's selection of salumi, cheese, olives and vegetables featured meats that were sliced so thinly you could see through them. We adored those pillowy fried doughs that came with it! 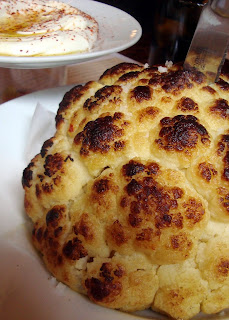 The roasted cauliflower, served with a whipped goat feta cheese dip, was exquisite in its simplicity. We are totally going to attempt to duplicate this one at our next dinner party! 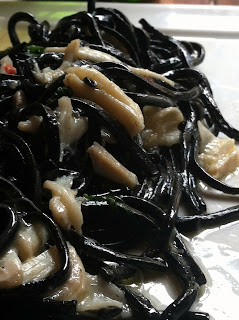 The contrasting colors and flavors of the squid ink tagliolini (black ink pasta tossed with opaque white crabmeat) made for a dish that was both beautiful to look at and to taste. The local crabmeat was so very fresh! 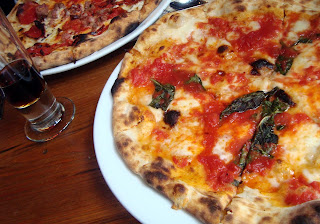 Pizzas were thin and crispy and topped with the freshest of ingredients - of the sort that would be well at home in a Roman pizzeria, except for the local Abita brew that J washed it down with, of course. 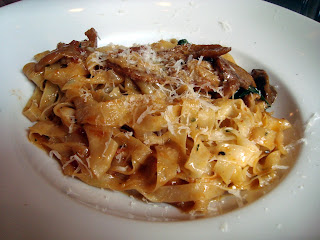 One bite of the tagliatelle with rabbit and porcini mushrooms took us back a decade to our trip to Tuscany. The rabbit was moist, the mushrooms earthy, and the dish well-composed. Delicioso! 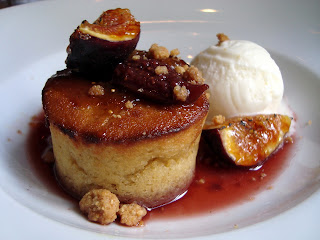 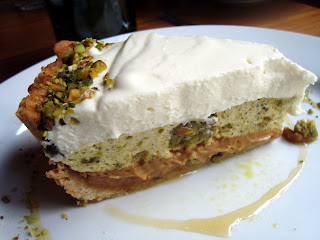 The desserts were also quite inspiring, particularly the oven-roasted peach cake, with Nebbiolo-poached figs and fiore di latte gelato. The crema cotta and pistachio crostata, with its many layers of differing tastes and textures, formed individually delightful bites. And the gelati were creamy, cold, refreshing and flavorful. Very traditionally Italian! 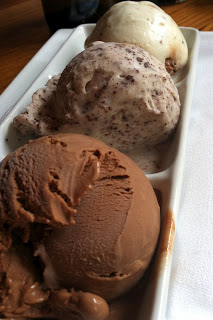 It was quite the lunch (yes, lunch!) and we very much enjoyed the incredible food, the beautiful setting, and being treated to it all by the best of friends. Thank you again, J and K! Love and miss you! 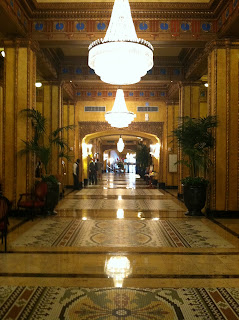 I was so impressed with John Besh's Restaurant August. I also had an amazing- yes, lunch- there. I can see his hand in the pics of your plates at Domenica.

Can't wait to try it next time i;m there.