The Best Fried Chicken We Ever Had (Willie Mae's) 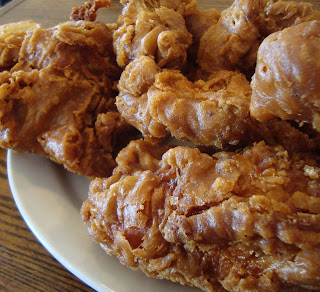 The best we ever had. It sounds hyperbolic, but in this case, it is 100% true. Willie Mae's Scotch House makes the best fried chicken we ever had. 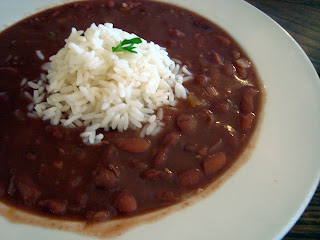 Willie Mae's (the place and its namesake) is a New Orleans institution. It was originally a bar (hence the "Scotch House" in the name) opened by Willie Mae Seaton in the 1950's on Treme Street, in the famed Treme neighborhood of New Orleans. A year later, it moved to its current location at 2401 St. Ann Street in the same neighborhood. All the while, Willie Mae herself cooked her acclaimed Southern-soul cuisine - the now-famous fried chicken, red beans and rice, butter beans, smothered veal, pork chops and more. By 2005, the food was so noteworthy that the place was honored as an American classic by the James Beard Foundation. Then came Katrina. 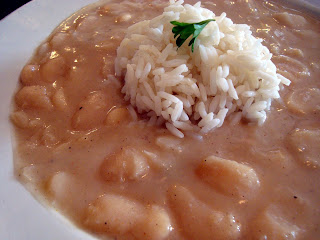 The restaurant, as well as Willie Mae's adjoining home, was destroyed. A couple of years, plenty of private donations, and lots of help from the Southern Foodways Alliance and its volunteers, and the small corner lunch joint reopened in April 2007. Willie Mae, now in her mid-90's, no longer helms the fryer, but her great-granddaughter Kerry is carrying on her culinary traditions (at least on Mondays through Saturdays for lunch). 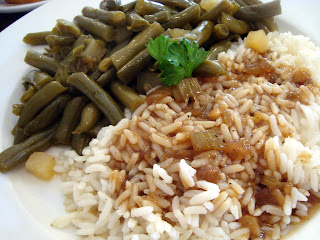 We grabbed a cab from the French Quarter and headed to Treme. When we gave the cabbie our destination, his smile widened and he said in his N'awlins drawl, "Now ya'll know what you're doin'!" He continued his praises of Willie Mae's fried chicken for almost the whole ride out, telling us he picks up some for almost every family gathering, and advising us as to which sides we should order. Ten minutes later, he dropped us at an unassuming white-washed cottage on a corner in a residential neighborhood filled with pastel-colored shotgun houses and said, "Ya'll enjoy!" 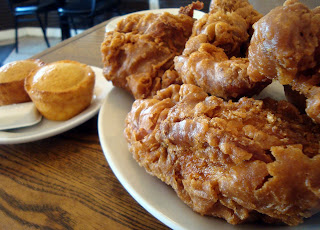 Our mouths were watering as we entered and smelled the food. There was no wait (a rare occurrence, we've heard) and we were seated in the small front dining room. We each ordered the three-piece fried chicken meal ($10) along with sides of red beans, butter beans and green beans, and a couple of cornbread muffins. 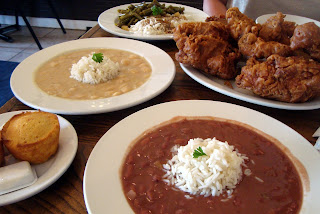 The fried chicken blew our hair back. It was out of this world! An amber-colored crusty coating enveloped each piece. It was perfectly seasoned and so wonderfully crispy that it shattered into brittle pieces as we ate it. The chicken inside was succulent and juicy and just soooo good. It's the perfect dichotomy of textures. We ate every crumb and licked our fingers clean. The sides were also delicious, but our favorites were the creamy butter beans in their velvety garlic gravy and the moist cornbread. 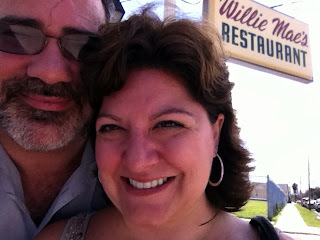 There is a lot of debate about fried chicken, but one bite in, and we are now staunch supporters of Willie Mae's as being absolutely the best we ever had. The juiciest. The crispiest. The flakiest. The Best. It deserves all of the praise it has gotten over the years, and we surely hope we can make it back there sooner rather than later.

To find out more about Willie Mae, her famous restaurant, and the inspiration she has been to the chefs of New Orleans, see this great YouTube video.

Crispy, flakey, succulent...you just made me wanna jump on a plane and go to Willie Mae's for breakfast!

I've seen several Travel Channel pieces on Willie Mae's, and I can't wait to try her chicken and the red beans and rice!

That chicken looks amazing! I've been to New Orleans a couple of times but never made it to Willie Mae's. Hopefully next time! Looks like it was a great culinary experience for you guys! : )

Hester @ Alchemy in the Kitchen said...

Sounds like a wonderful visit for your taste buds. I love fried chicken and am always experimenting to get it just right. Sounds like Willie Mae's has cracked it - you didn't happen to extract their secret recipe did you ;)

Great article with excellent idea! I appreciate your post. Thanks so much and let keep on sharing your stuffs keep it up.holy food
religious food

How creative!. It is so delicious. Thank for sharing. I love fried chicken. I'm going to try it now

creative and informative post .Fried chicken is my favorite recipe . Thanks for sharing .