Attack of the Garden Tomatoes (with recipe for Slow-Roasted Tomatoes) 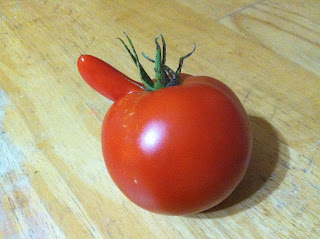 Whether or not you have a dirty mind, you need to take a look at this weird thing that came out of our garden. Yikes! 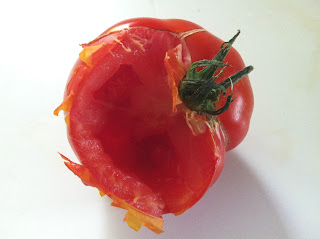 We have so many tomatoes, we don't know what to do with them all. The other day, we harvested a few and put them in a bowl on the kitchen windowsill where Louie (our younger cat) loves to lie down in the sunshine. The next morning, this is what we found. Guess Louie likes tomatoes! And, yes, we found a different location to store them in. 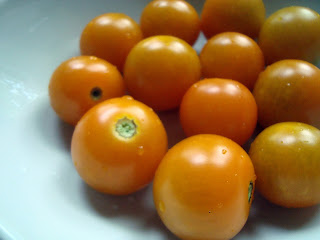 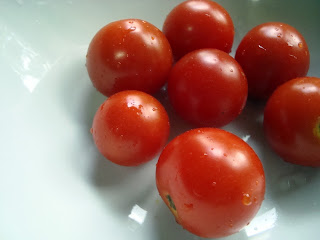 We are totally into these Sun Sugars - perfect, round, bright orange tomatoes that taste like candy! Great for straight up eating, but we have soooo many. We also love the Husky Red Cherry tomatoes that are just now ripening. 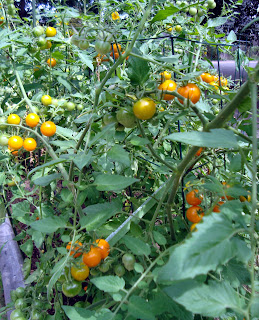 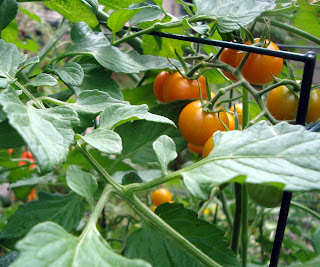 Rather than buying "sun-dried" tomatoes in a jar (Are they really dried in the sun, or is it some sort of chemically induced drying process?), we are making slow-roasted cherry tomatoes that will allow us to take our tomatoes into fall! We will use them in pasta dishes, salads, bruschetta, so many uses! Here's what we do, but this is definitely one of those "flexipes" (that would be a flexible recipe): use the herbs you like, don't use garlic if you don't want to, adjust the amounts according to the number of tomatoes you have. You get the picture. 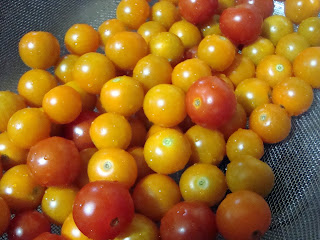 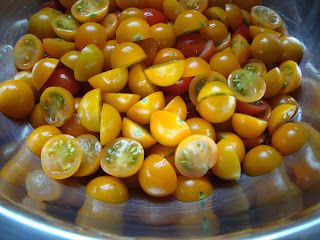 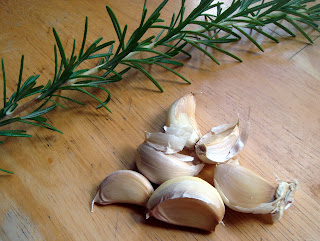 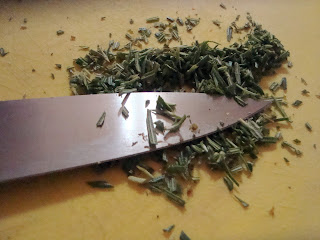 What's great about these is the intense flavor that is brought out during the roasting. We ate most of them shortly after they cooled. Some we stored in olive oil - the added flavor that is infused into the oil is fabulous for bread-dipping and such. People tend to be wary of storing things in olive oil, but as long as your ingredients are well-washed, your storage container is sterilized, and you store these in the refrigerator, all research we've done says it's fine to keep tomatoes like this for up to six weeks. Longer than that, and you should follow stricter canning/preserving techniques. They taste so good, you won't need to worry about all that... 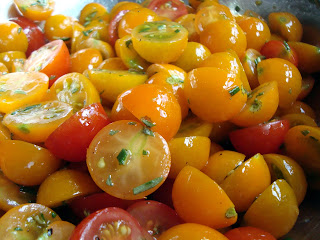 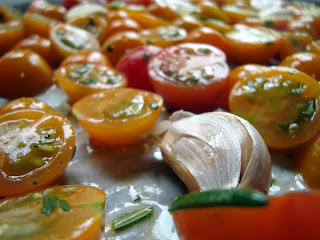 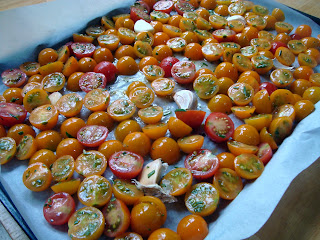 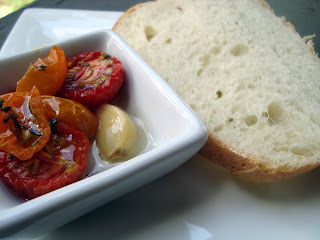 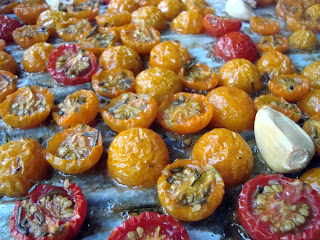 *Cooks' note: We used rosemary this time and are thinking of using oregano, thyme, or basil for future roastings. Yes we will soon have that many tomatoes. 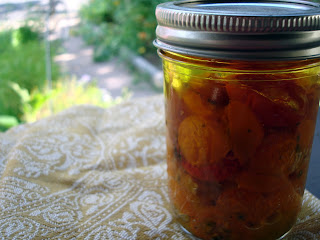 Preheat oven to 200 F. In a large bowl, place the halved tomatoes and rosemary. Drizzle with olive oil and season with salt and pepper to taste. Gently mix well with your hands. Line baking sheets with parchment paper. Pour tomatoes onto parchment paper in one layer, then place garlic cloves in different areas on the baking sheet. Bake for 2-3 hours, until tomatoes look mostly dry. Allow them to cool well. If storing, place them in canning jars, packing them in well and using the handle of a wooden spoon to force air out of the jar. Cover completely with olive oil and seal with airtight lid. Store in refrigerator for up to six weeks. 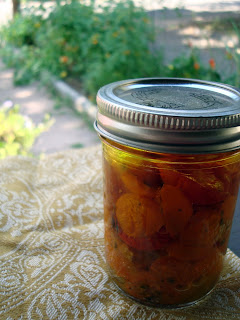 With one "alien" looking one, those are still great tomatoes!