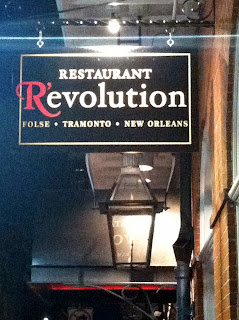 Revolution. Coup. Innovation. Metamorphosis. Transformation. Uprising. Who would attempt a culinary "revolution" in the one city in America that takes more pride in its culinary traditions than anywhere else? The answer is Chef John Folse and Chef Rick Tramonto, with their newly opened, and aptly named, Restaurant R'evolution in the Royal Sonesta Hotel in New Orleans. The two are an unlikely pair - Louisiana native Folse is an authority on Cajun and Creole cooking, while Tramonto is an Italian from New York who worked in fine dining restaurants there and in Chicago before announcing the partnership with Folse in 2010. Restaurant R'evolution is their first place together, and while we were in New Orleans, nothing was going to stop us from eating there.

The home base for our stay in New Orleans was best friends' K's and J's home in River Ridge. But we decided to get a couple of rooms in the French Quarter for a night, dress up and find out whether R'evolution can deliver on their promise of a contemporary translation of Cajun and Creole cuisine (it can, and it does). 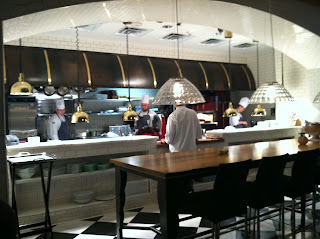 We were seated at a table within view of the open kitchen, always a plus for us lovers of the Food Network and Cooking Channel. The walls were lined with white-washed cabinets in which hung various meats destined to be thinly sliced and served on charcuterie platters. The chairs were high-backed and comfortable, a good thing, since our dining experience, from amuse bouche to complimentary sweets, lasted close to four hours. The decor was elegant with a touch of whimsy, like scarlet spindles printed onto the chair upholstery and a silhouette of a Southern belle etched into the glass on the ladies' room door. 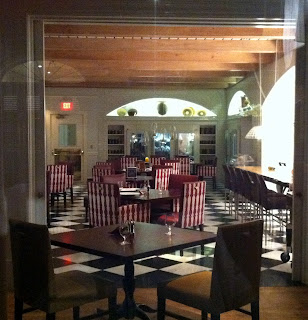 We settled in with our drinks and shortly after, our server brought an amuse bouche of a shot of carrot and ginger soup with a slightly salted rim. We love the colored cardstock that decorated each plate - a fun and festive look indeed. 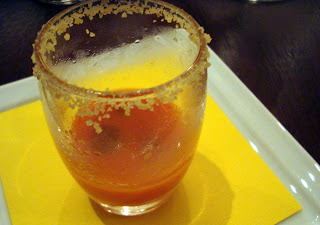 Much to our delight, Chef Folse visited the table and asked what we were thinking of ordering. At this point, Amy became her chef-groupie self, staring with wide-eyed wonder and blushing while trying to form a coherent sentence while the rest of the table had a nice conversation with the legendary chef. He was a friendly and gracious host who offered suggestions of his favorites and happily posed for a photo or two. 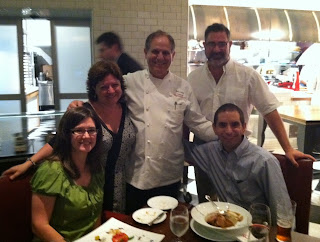 We took Chef's suggestions under advisement, then the four of us each ordered an appetizer and an entree, along with a couple of side dishes for the table to share. Of course, we also (barely) left room for dessert. Here is a photo gallery of the meal, along with brief descriptions of each dish. 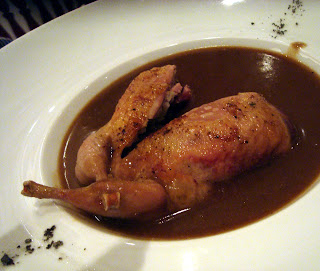 Death by Gumbo - a wonderfully rich, muddy broth poured at the table over a roasted quail with spicy andouille, rice and briny oysters. 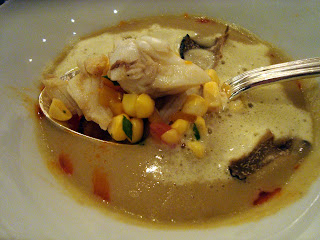 Corn and Crab Cappuccino - a soft, velvety soup filled with fresh sweet corn and crabmeat and topped with a little bit of popcorn and a thin sliver of black truffle. 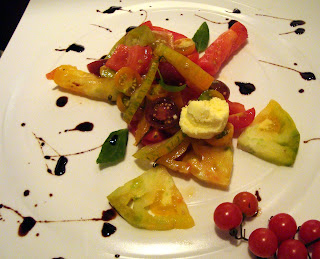 Tomato Salad - a Jackson Pollack-esque plate of heirloom tomatoes drizzled with balsamic and garnished with a scoop of olive oil gelato.

Pig Out Board - a charcuterie "binge" board of various meats, vegetables and relishes. 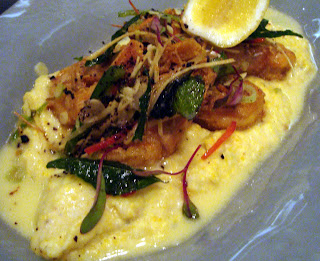 Gulf Shrimp and Grits "Villages d'Est" - head-on shrimp stir-fried in a spicy ginger and chili sauce and served over cheesy grits that Chef Folse told us are stone-ground at his plantation near Baton Rouge. 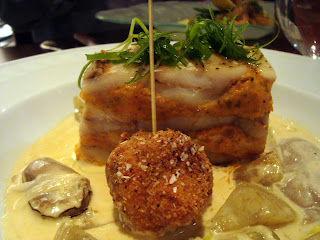 Crawfish-Stuffed Flounder Napoleon - one of chef's strong suggestions - flaky flounder with a crawfish dressing served in a tangy artichoke and oyster stew with fried crawfish balls. 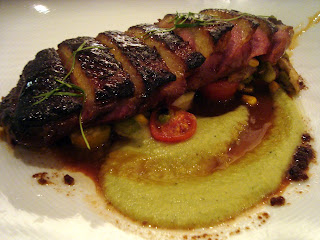 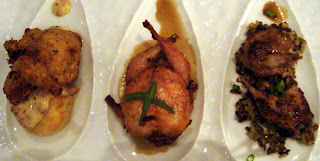 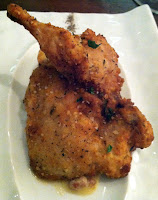 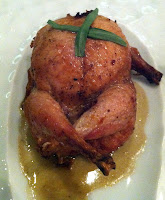 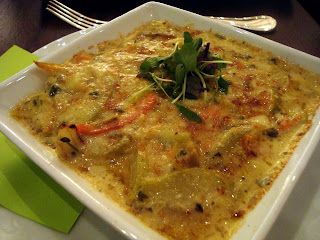 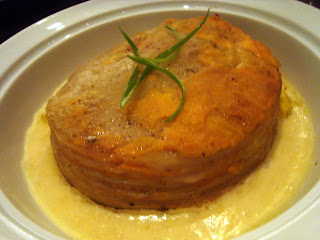 For side dishes, we went au gratin, sharing the Artichoke and Mirliton (aka chayote squash) au gratin and the Gruyere potatoes au gratin (the former got the winning vote). 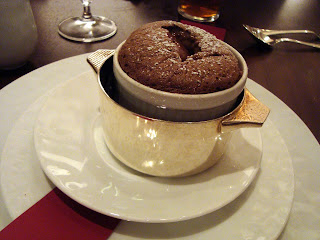 Dessert also offered a "triptych" this time of cheesecakes, which the ladies shared: marscapone with peaches, Creole cream cheese with strawberries, and goat cheese with plums; while the gentlemen enjoyed a chocolate souffle with Grand Marnier creme anglaise. At the end of the meal, our server delivered a gorgeously decorated jewelry box, and in each drawer were sweets - tartlets, truffles, pralines - to finish our meal. 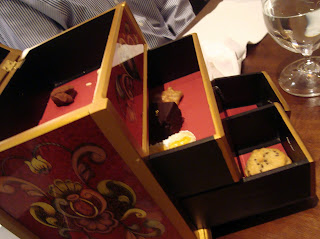 This was, in many ways, among the best dining experiences we've had. Each bite (and yes, we all somehow managed to taste everything that came to the table) resulted in moans of gastronomic pleasure, and there were plenty of bites to go around. Enjoying it with our best of friends made it even better, naturally. There were some problems in the service - it was a bit slow, at times inattentive, and there were a couple of serious fumbles (Amy was given two knives and no fork to eat her duck with, a server splashed J with beer). Still, the food, as it should be, was the star of the show, with each simple Louisiana ingredient being respected while at the same time gently coaxed into a better version of itself.  In this way, one can almost compare it to the city of New Orleans, relying on her foundations not just to rebuild, but to evolve into something better. That is what Chefs Folse and Tramonto are doing here. And it is truly revolutionary. 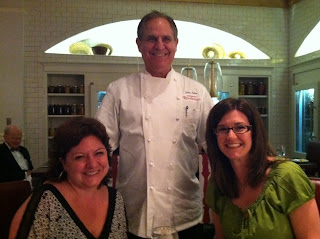 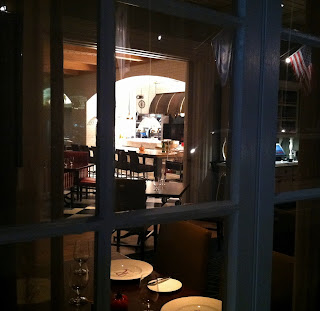