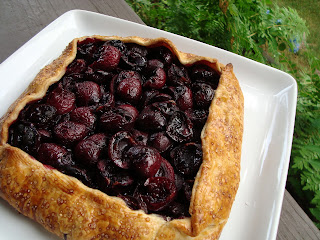 This week, we officially reinstated our weekly summer dinner with neighbors D and J (and 3-year-old N). When we're in town, we pick a night, split up the dinner duties and share a meal, as good neighbors should. We talk and laugh and drink wine and generally just enjoy each other's company while the sun goes down (or in today's case, the thunderstorm ends).

This week's menu revolved around one of D's Father's Day gifts: Jack Daniels Wood Smoking Chips. Since D and J work during the day while we teachers are home (tee hee), D entrusted us with the chips so we could smoke country-style pork ribs in our smoker. Chris rubbed the ribs with his secret blend of sugar, salt and spices and smoked them for a few hours while making a Jack Daniel's barbecue sauce. Amy made a quick cucumber salad, and together we did a "semi-homemade" cherry crostata for dessert. Some grilled corn and mashed potatoes rounded out the meal. Sounds good, eh? 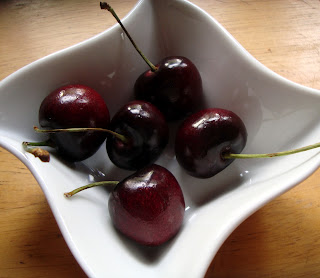 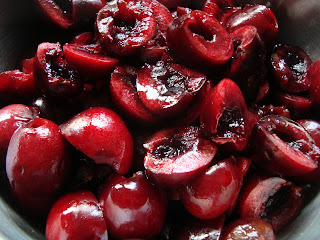 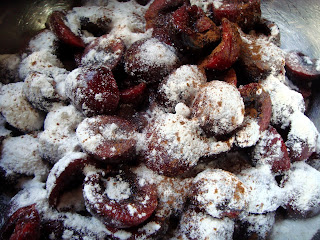 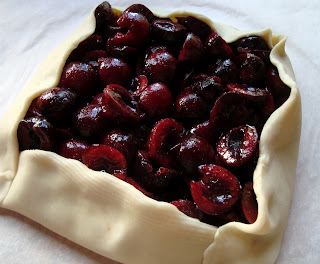 Everything was delicious - the smoky-sweet tender ribs, the early butter-sugar corn, the buttery mashed potatoes with fresh chives, the vinegary cucumber salad.  We would love to say the dessert stole the show, but that was not the case. Still, it too was delicious. Tart, sweet, and with plenty of buttery crust, it was a fitting ending. Perhaps it was the beautiful fresh cherries that did it? Maybe it was the easy preparation and simple rusticity of the crostata. You can come to your own conclusions if you make it yourself. And if you do, make sure to follow this great tip from Chris:

Use a chopstick to pit the cherries. The pits pop right out, and then you can cut the cherries in half easily. 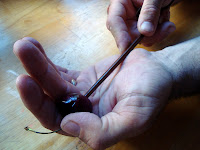 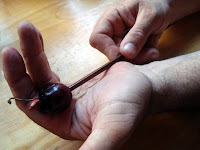 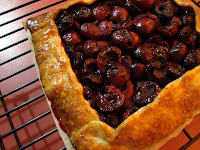 Place a pizza stone in the oven and preheat it to 425 degrees. Line a baking sheet with parchment paper. Unroll one refrigerated pie crust onto the parchment paper. In the meantime, cut the cherries in half and place them in a large bowl. Add sugar, flour and cinnamon to the cherries and toss gently until well combined. Pour the cherry mixture into the center of the pie crust. Fold the sides of the pie crust up over the edge of the cherries. Beat together the egg and cream and brush this mixture onto the pie crust. Sprinkle with turbinado sugar. Trim away the extra parchment paper and carefully slide the crostata, with parchment paper under it, onto the hot pizza stone. Bake at 425 for 30 minutes, until crust is golden brown and cherry mixture is starting to bubble. Cool on a wire rack until ready to serve.
Posted by Amy at 9:40 PM

What a tasty looking crostata!

That is such a clever way to pit cherries! Never once occurred to me!