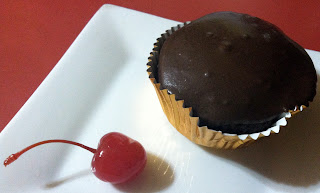 Are you surprised? We readily admit it: we're not known for our baked goods. But when we tasted Cupcake Vineyards' "Red Velvet" wine, all we could think about was making cupcakes with it. So we did. The idea stems from last year's vacation to Maine - last summer, Amy had copied a recipe from People Magazine for "Zinfandel Cupcakes" and we never made them. This recently-discovered wine, coinciding with an upcoming meeting of Amy's book club, was the inspiration for us to try them now. Seriously - doesn't every book club meeting need wine and cupcakes?!? How about killing two birds with one stone?

About the wine: "Red Velvet" wine is a blend of Zinfandel, Merlot, Cabernet Sauvignon and Petite Syrah. It has a pronounced taste of chocolate/mocha in itself, particularly on the finish. There is also a lot of fruitiness to it, mostly cherries and blackberries, as well as a hint of coconut. Perfect for cupcakes, right?

As we often do, we played with the People recipe (just a little bit) and came up with our own version which we tested on the neighborhood. They were a big hit there, where we heard of couples sharing bites on their porch swings in the early summer evening sun. We'll be making them again next week for the book club. And we probably won't change a thing...

Special equipment: non-stick cupcake/muffin pan with a spike in each cup
Note: We only have the one cupcake pan, so we did this recipe in two batches.

Preheat oven to 325 (350 if your pan isn't non-stick). Place cupcake (muffin) liner in each cup of a regular (12-cup) cupcake pan. Place a cherry on each spike (or in each cup if yours has no spike). In a large bowl, pour cake mix, water, wine, oil and eggs. Mix together as directed on the box. Stir in chocolate chips. Pour into lined pan, filling cups about half way. Bake for 20-23 minutes, until toothpick inserted into center comes out clean. Allow to cool slightly, then remove cupcakes from pan onto cooling rack. Cool completely. Repeat process with second batch. In the meantime, make the glaze. In a large bowl, beat together powdered sugar, butter, cocoa and salt using an electric mixer on low speed. Beat in the wine. When cupcakes are completely cooled, cover them with the glaze. 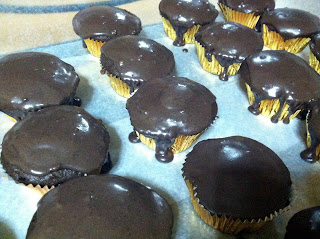 I loved your line about book clubs and cupcakes! It made me laugh out loud 'cause mom mom always asks me to back a double batch for hers when it is her turn. I wish she would be as adventurous as to allow me to make these for her.

Interesting. I'll have to try these because I love baking with any kind of alcohol!

Amy, thanks for linking this nice one in to Food on Friday. If you pop back in a while there should be a great collection of muffin and cupcake ideas to check out! The links are coming in thick and fast. Cheers