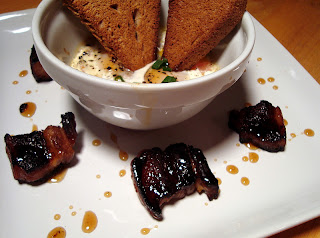 For our second attempt at pork belly, we were inspired by Cooking Channel's television show "Everyday Exotic" with Chef Roger Mooking. For each episode, Mooking chooses his "obedient ingredient" and creates three or four dishes highlighting that ingredient. You can find the recipes on the show's website. However, when we made this dish, we were living without Internet in the aftermath of Winter Storm Alfred, so our recipe is adapted from the show.
Pork belly, from which bacon and pancetta are made, is inherently tough, fatty and salty. The ultimate goal is to get the fat rendered into the meat which will make it tender and flavorful. This takes several steps (blanching, simmering, searing, roasting), but the result is definitely worth the effort. 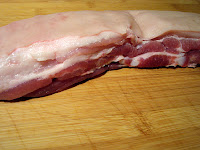 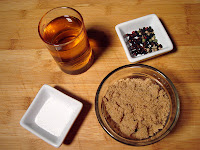 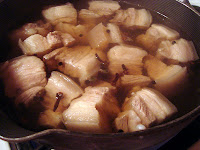 After removing the pork belly from the pickling liquid, we patted it dry with paper towels and seared it on all sides in a very hot cast iron pan. During this time, we prepared our baked eggs for cooking. We then put the pan with the pork belly into the oven along with a cookie sheet on which the dishes with our about-to-be-baked eggs rested. We let everything bake for 15 minutes at 400 degrees.
We made some toast. The timer rang. We drizzled the pork belly into the glaze and plated the dish. We dipped the toast into the creamy baked eggs then bit into the salty sweet smoky crispy glazed pork belly. Oh yeah. This is definitely bacon-and-egg-breakfast upgraded to dinner. Awesome.

That works for me breakfast, lunch or dinner!

What an interesting dish, this looks so delicious! :)

I wish you were my neighbor! This looks so amazing!!!

YES!!! I love this as dinner. This looks amazing!

This is my kind of dinner. Of course I'd love a breakfast like this!

Pork belly for breakfast...are you trying to steal my husband from me? This is decadent and I'm totally in!

Have to try cooking pork belly! I love it, but I never tried cooking it myself. Your recipe looks great!