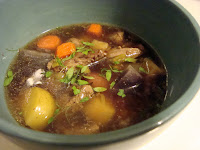 We were just talking about green things, and here it is, St. Patrick's Day 2011. Our chef/friend Lise was on Good Morning Connecticut last weekend demonstrating how to make her Irish Stew, and since it looked so easy and sounded so delicious, we decided to make it for our annual Irish-themed dinner with our neighbors D and J. It's a nice tradition, actually - they make corned beef and cabbage, we make something else (neither corned beef nor cabbage are "Amy-approved"), and we have ourselves a feast to honor the patron saint of the Emerald Isle. As we tend to do, we made a few changes to Lise's recipe (with her blessing!), but followed the directions she provided in the t.v. segment which you can watch here. And guess what? As expected, the stew was both very easy and very delicious. 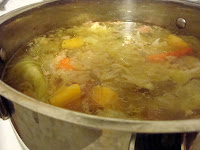 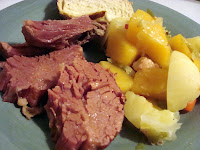 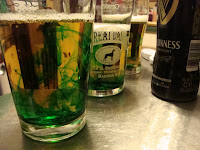 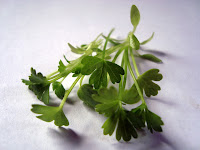 1 bottle Irish ale (see note)
6-8 small potatoes, quartered (we used red, purple and yellow)
1 cup coarsely chopped leeks
1 bundle fresh thyme
freshly cut celery microgreens  or parsley for garnish
(celery microgreens pictured right, more on that in a post coming soon)
Plug in a 6-quart crockpot and turn it to high. Place trimmed lamb bones in crockpot (if you have any) to flavor the stew. In a cast iron pan, heat oil over medium heat. Season lamb pieces and cook in two batches, stirring gently, until evenly browned. Remove from pan to crockpot. Add all remaining ingredients except garnish to crockpot. Cover and cook on high for 3 to 3 1/2 hours. Remove bones and thyme bundle from crockpot and serve stew in large bowls with a pretty garnish, some crusty bread and a bottle of Irish ale to with. Erin go bragh!
Posted by Amy at 10:40 PM

Sounds like your St. Paddy's celebration was fun! Stew is a nice alternative to the corned beef US tradition! Very cool!