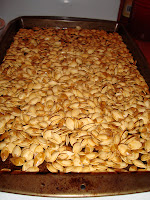 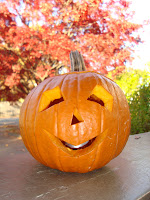 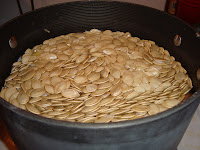 While going through the digital photos for our last blog, I noticed the pictures I took of Halloween and realized I never blogged about my pumpkin seeds. Chris and I had bought two large pumpkins and two sugar pumpkins, so I spent the afternoon cleaning them out and getting them ready for Chris to carve, although I decided to carve a little one myself (see photo). I had lots of pumpkin seeds and here's what I do with them.

First, I boil them in a large pot of very salted water. This is so the salt doesn't only sit on the seeds, but gets into them as well. The boiling process makes them look gray, but I care much more about how they taste than how they look! After they've been boiling about 20 minutes, I lay them out in one layer on a cookie sheet and allow them to dry for several hours. When them seem pretty dry, I melt 1/2 stick of butter and mix it with 1/4 cup of olive oil. I toss the seeds in this mixture and then spread them back out in one layer on a cookie sheet. I sprinkle them with salt and bake them for 45 minutes at 375, and when they're done, I have a sort-of healthy, tasty, crunchy, salty snack!
Posted by Amy at 4:05 PM