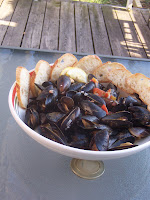 My friend J and I often share mussels when we visit a restaurant that has them. If we have a choice between red and white sauce, we choose the white, probably to avoid leaving any stains on our clothing. We had some mussels the other night and it reminded me of the dish Chris and I made for a late-summer neighborhood party we had in August.

Mussels were on sale - two 2-lb. bags for $5. We bought four bags, figuring we could spend $10 and make enough to bring to the get-together. We put half of the mussels in the bottom of a large stock-pot, topped them with one roughly chopped white onion, six whole garlic cloves, some chopped green onion and parsley from our garden, four chopped garden tomatoes, 3/4 stick of butter cut into quarters, some salt and pepper, and then put the other half of the mussels in. We added about 1/2 bottle of white wine (we used Pinot Grigio), the other 1/4 stick of butter and a few more sprinkles of herbs on top and put the lid on. We brought the whole pot to the neighbor's party. Once there, we put the mussels on the outdoor gas burner and let them steam for about 10 minutes, until we could see they were all open. We served them in a large dish with a crusty baguette and some lemon slices. Everyone was so impressed by our culinary prowess that I didn't have the heart to tell them how simple it was.
Posted by Amy at 11:23 AM