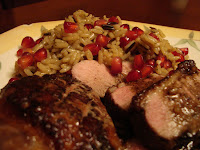 Pom Wonderful, the company that grows gorgeously large pomegranates and makes different varieties of pomegranate juice, is sponsoring a recipe contest and I decided to enter. I developed the recipe below using some of their 100% pomegranate juice as well as one actual pomegranate. I love the pomegranate. When I was growing up, every fall my mother would buy these exotic fruits for me and my sister, and they were a special treat for us girls. We would eat the seeds as if they were candy and would be so sad when winter came and the "love apples" disappeared from the produce aisle. Now, I'm a Latin teacher, and as soon as pomegranates are available, I tell the story of Persephone, daughter of the Roman goddess of agriculture, Ceres. Persephone was kidnapped by the lord of the Underworld, Pluto, and was forced to eat pomegranate seeds to ensure that she would stay with him in the world of the dead for half of each year. During those months she is away from her mother, Ceres mourns and nothing grows, thus we have the ancient explanation of the seasons. Each year, I find that many of my students have never tried a pomegranate, so I bring in a whole one and a bowl of seeds for them to taste. I was very excited to do something with this fruit other than just eating it, and since I love duck (see earlier "I Heart Duck" post), I thought long and hard about how to make a pomegranate duck dish. The recipe I worked on resulted in a juicy duck breast drizzled in a deep red, tangy-sweet sauce, and the pomegranate seeds added an unexpected crunch to the wild rice. Here it is for you to enjoy:

Mix the ingredients for the marinade in a large Ziploc bag. Score the skin of the duck breasts and place them into the bag with the marinade. Marinate for 3-4 hours. After duck is done marinating, pre-heat the oven to 350 degrees. Heat a large saute pan on high heat and place the duck in, skin side down. Pan-sear the duck on high heat for 3-4 minutes each side. Then put the duck in a baking dish and place in the oven for 20 minutes (for medium-rare). While the duck is finishing in the oven, prepare the rice according to the directions. Also make your sauce by turning down the heat on the saute pan and deglazing the pan with 1/2 cup pomegranate juice, being sure to scrape up the fond from the duck. Stirring often, season this sauce with salt and pepper to taste and reduce it on medium-low heat until it becomes thickened (7-8 minutes). Add 1/2 tablespoon unsalted butter and continue to stir the sauce, allowing it to reduce until it has a syrupy consistency. When the rice has finished cooking, toss it with seeds from the half-pomegranate. Serve the sauce over the duck with the rice on the side and enjoy your anti-oxident rich meal!

I think you've got a winner here! - Kathy

Like YOU care about anti-oxidants? I sure as hell don't!

This looks delicious! Will have to try soon.

Yours in espresso,
Todd