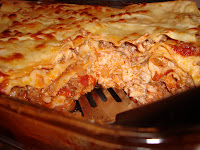 We finally bought a pasta maker, the old-fashioned, hand-crank kind. The stainless steel is so shiny, I can almost see myself in it, and with a coupon, it only cost around $20, a bargain! Needless to say, we've been very excited to try to make fresh pasta. I thought a good start would be lasagna noodles, because that doesn't involve a lot of cutting and hanging and drying. So the plan was to make lasagne totally from scratch this past weekend.

We were free on Sunday and while I got the traditional first-of-the-holiday-season batch of homemade Chex Mix going in the oven, Chris measured out our flour and broke our eggs and set the KitchenAid to work on kneading the pasta dough. When we had a ball of pasta, we let it sit for 15 minutes to rest and then divided it into six small portions. We cranked each portion through the first setting six times, then through the remaining settings once each. We were left with long, wide strips of pasta that were rippling at the edges, just right for lasagna. We let these dry for 15 minutes then cut them to fit our baking dish.

In the meantime, I made a quick tomato sauce by sauteeing two cloves of garlic, one medium-sized chopped onion, a tablespoon of tomato paste and Italian seasoning. When the onions were soft and browning, I added a large can of crushed tomatoes and some salt and pepper. I let this simmer while Chris opened a bottle of Valpolicella and proceeded to add about a cup to the sauce. The sauce became a deep red color and was much tastier and less tomato-sweet after the addition of the red wine. As the sauce simmered, I made the ricotta filling by mixing one container of ricotta cheese, one cup of shredded mozzarella, 1/2 cup of grated grana (similar to parmesan) and one egg. For seasoning this mixture, I added a dash of nutmeg, a few shakes of dried parsley and of course, plenty of salt and pepper. Finally, I browned a pound of ground beef, making sure all of it crumbled without overcooking it.

Once we had cut the pasta, we placed it in boiling water until it began to float (about 2 minutes) and began to assemble the lasagna. Each layer consisted of pasta on the bottom with a thin cover of sauce, then a sprinkling of beef and several dollops of the cheese mixture. We repeated this until we ran out of ingredients and then did a smattering of mozzarella on the very top. We baked our lasagna for a half hour at 350 until we could see it bubbling.

The lasagna stayed together nicely; it was very easy to cut a piece and not have it fall apart into a mushy mess. It had great flavor and the ingredients were evenly spaced throughout each bite. The top layer of pasta got crunchy, and I attribute this to the fact that we did not cover the dish when we baked it, which I guess we should do next time. We had enough to give my friend J a big piece for lunch and have some again the next night for dinner. All in all, a success, and I look forward to my next homemade pasta adventure - ravioli!