Amy's mom recently made a comment that our recipes were getting a little crazy. She briefly mentioned fish sauce as a particularly odd ingredient. Well, Mom, you're not going to like this one, we expect. So let us start by restating something we've said before, which is that we feel recipes are mostly suggestions, not meant to be followed to the letter. We write about what we did and encourage you to try it your way.

That said, on a recent summer motorcycle ride out to Brooklyn, Connecticut, we stopped at the Creamery Brook Bison Farm (see also our old post here). If you are ever in the area on a weekend, you should go check it out. Besides bison, they have emus and many different birds. They offer farm tours and wagon rides, host seasonal events, and have a store in which they sell their meat along with an astounding array of bison-themed products. Plus, there's ice cream! It's a small, family-run farm, so definitely check their website before you go for their hours and other pertinent information. 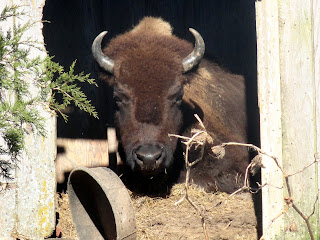 On this particular day, we picked up a gorgeous bison tenderloin at the farm's store. When we got home, Chris trimmed it to remove the extra fat and silver skin. We tossed some small potatoes in olive oil with fresh herbs and Chris set out to the deck to put those on the grill. Once they were nearly cooked, he put on the meat, first searing it on all sides, then turning down the heat to cook it to medium rare. It didn't take long, and he was very careful not to overcook it, because it was a beautiful piece of meat. (If you're not sure how to cook bison, the farm has handout to guide you).

While Chris was grilling, Amy made this cherry-fig chutney to serve over the meat. In case you don't know, besides being the most annoying character in Legally Blonde, a chutney is a spicy condiment made of fruits or vegetables with vinegar, spices, and sugar, sort of like a savory marmalade. We had fresh cherries in the house (see also Cherry-Lemon Clafoutis) and thought they would work nicely with the bison, although we think this sauce-of-sorts would also be great with beef or pork. 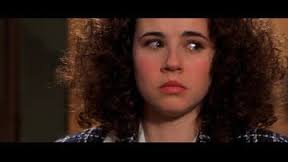 The "strange" ingredient Amy's mother might not like here (besides the bison, that is) is the fig-infused balsamic vinegar, a gift from our neighbors D and J. It really gave the chutney a deeper, darker, sweeter, less acidic flavor than a regular balsamic vinegar would. If you can't find it at your grocery store, they would certainly carry it at one of those specialty olive oil/vinegar shops that seem to be all the rage lately. Williams-Sonoma has one as well. In other words, while it may take more effort, it will be well worth it.

Heat the oil in a large skillet over medium heat. Add the onions and cook until caramelized, about 10 minutes. Remove the onions to a small bowl and set aside. Put the sugar, vinegar, cinnamon, cloves, and cayenne in the skillet and stir to combine. Bring to a boil, then immediately reduce heat to low. Add the cherries and allow to simmer for 10 minutes. Return the cooked onion to the skillet and season to taste with salt and pepper. Serve over bison, beef, pork, or whatever you wish.