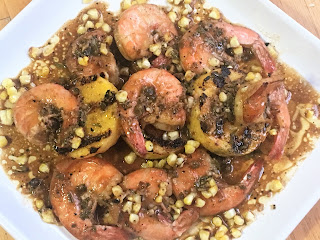 Having lived in New Orleans for several years, Amy loves her some Southern food. One particular favorite is shrimp and grits. The other night, though, we decided to play with it a little and try a new spin on this Louisiana classic. 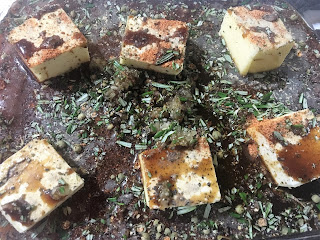 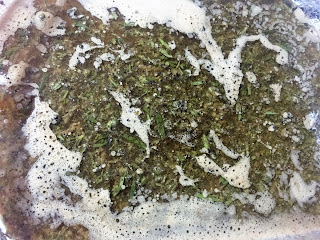 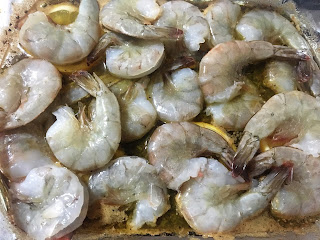 We married Amy's other favorite -- New Orleans-style barbecue shrimp -- with grilled polenta cakes. For what is polenta but Italian grits, right? To boost the corn flavor, we roasted fresh corn and sprinkled it on top. This could be how we eat shrimp 'n grits from now on! 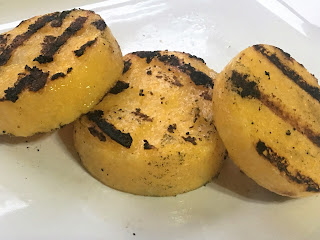 Tip: Leaving the shells on the shrimp allows the sauce to get trapped inside and keep the shrimp juicy. Serve this dish with lots of napkins because these shrimp will have to be peeled to be eaten by diners. 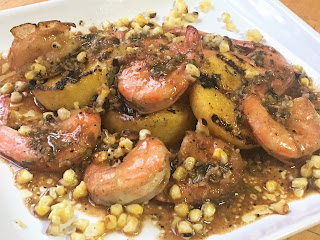 For the corn:
Heat your grill to medium-high. While the grill heats, soak the corn, still in the husk, in a bowl of cold water for 10 minutes. Shake off the excess and place the corn on the grill. Close the grill and cook, turning often, about 20 minutes, or until the kernels are tender. Cut the kernels off the cob and set aside.

For the polenta:
Slice the polenta into 1/2-inch slices and drizzle with olive oil. Place on the grill and cook, flipping once, until heated through.

For the barbecue shrimp:
Preheat oven to 450F. Cut the butter into pats and place in baking dish large enough to hold the shrimp in one layer. Add pepper, peppercorns, Creole seasoning, rosemary, Worcestershire and garlic. Place in oven until butter is melted, stirring to combine ingredients. Place lemon slices in one layer over the sauce, then lay the shrimp on top, also in one layer. Return to the oven. Cook approximately 3 minutes. When shrimp start to turn pink, turn shrimp over and cook another 3 minutes.

To assemble: Arrange the polenta on a plate, place the shrimp on top and around the polenta. Drizzle entire plate with the shrimp sauce and sprinkle with corn kernels.