An Evening in Barcelona (New Haven, That Is) 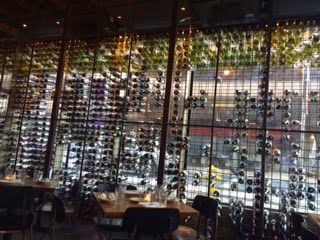 Barcelona's Wine Wall
The Spanish word tapar, meaning “to cover,” is the derivation for that country’s most famous style of eating -- small dishes called “tapas.” These snacks originated in the taverns of Spain, where slices of bread were topped with cheese and meat, and placed on top of patrons’ drinks to protect them from fruit flies. Surely it must have helped that many Spanish cheeses and meats were then, and still are, particularly salty, stimulating thirst. Thus it seems that tapas have always been not only protective but also profitable. 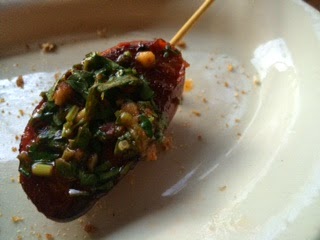 Chorizo Pintxo
While modern-day Connecticut taverns are a far cry from the taverns of old Spain, Barcelona Restaurant and Wine Bar in New Haven is serving an assortment of tapas inspired by its namesake city. The Temple Street location, one among the small chain of ten, is easy to miss. There is no sign for the restaurant. But it is there, located right next to the Omni New Haven hotel. Look for the sturdy wooden door and wine-lined window-wall and you will be in the right spot. 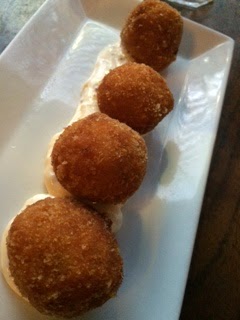 Ham and Chicken Croquettes
The decor is more industrial Manhattan than coastal Mediterranean, dark and noisy with fittings and fixtures made of glass and steel. A recent early-evening crowd included business folk enjoying happy hour in the cavernous bar as well as couples and parties of four feasting in the only slightly more intimate dining room. 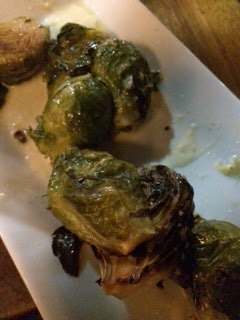 Brussels Sprouts
Speaking of happy hour, this may be the best reason to visit Barcelona. Recent offerings included $2 and $3 tapas, $4 sangrias, $5 wines (including some uncommon Spanish and Portuguese choices) and $5 cocktails. The roasted almonds ($2) were sweet and soft, moist with oil and perfectly salted. Another perfectly seasoned snack was the chorizo pintxos ($2), spicy grilled sausage served on a toothpick (pintxo being the Basque dialect’s version of the Spanish pincho, meaning “pierced”), topped with a zesty green dollop of herbs and oil. The daily bocadillo, or sandwich ($3), was brimming with tender roast pork and red peppers. It was served on crusty bread, and was among the best bites of the evening. The only disappointment here was the pan con tomate ($2), toasted bread with a roasted tomato spread, which was completely over salted. 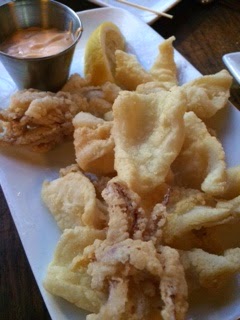 Calamari
The regular menu is divided into three sections: meats and cheeses ($6.50 for one, $17.50 for three), tapas (ranging from $3.50 to $10.50) and main dishes ($10.50 to $16.50). Some dishes seem out of place, more French- or Italian-inspired than Spanish, such as the country pâté or the sauteed broccoli rabe. For those unfamiliar with Spanish cuisine, the menu can be hard to navigate. Some things are explained well, such as “albondigas, meatballs in tomato sauce.” However, many are not, for example “boquerones, parsley, olive oil.” For the brave and trusting, there’s a specially-priced tapas tasting which is nice for larger parties like ours was. 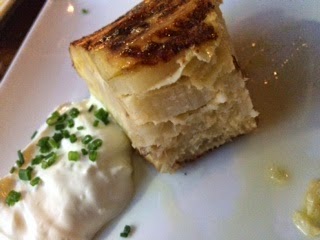 Potato Tortilla
However, amidst those tasting items were seasoning issues similar to the happy hour bites mentioned above. Some dishes were unappetizingly salty and others were completely bland. The ham and chicken croquettes were creamy on the inside and crunchy on the outside, but otherwise did not live up to the server’s claim that they are called “crack-ettes” by the staff. (No one in our party found them addictive.) The potato tortilla, a mainstay on any tapas menu, tasted too much of sweet onion and not much of anything else. The seasoning on the calamari was so lost all that was left was texture; even the peach-colored sauce it came with tasted bland. My hopes rested on the best-sounding menu item of the bunch: gambas al ajillo - described simply as “shrimp, garlic, sherry, hot pepper.” Unfortunately, all hope was lost as the delicately sweet shrimp were overpowered by the chef’s enthusiastic pour of smoky sherry. There was no spice to speak of. 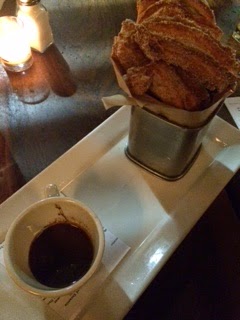 Churros
We should have been too stuffed for dessert, but this is another great thing about tapas-style dining - the opportunity to taste many things without feeling the fullness of courses. The churros were exquisite, if such a thing can be said about carnival fare. The hot crisp exterior was a superb contrast to the soft, doughy inside. As for the spiced dark chocolate dipping sauce that accompanied it? I could gladly have eaten it with a spoon, and so the somewhat uneven evening ended on a high note.