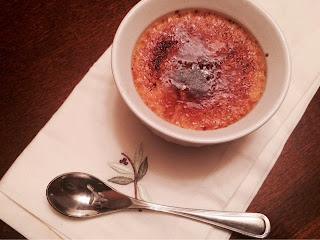 Our friend E loves food. She just doesn't know it. When we first met her, she claimed to be "allergic" to almost everything. Sugar. Gluten. Shellfish. Meat. The fact was, she had never really experienced good cooking. When she decided she didn't like something, she pronounced herself "allergic" and didn't eat it again. 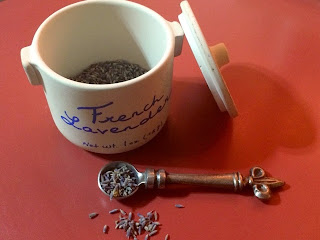 Until she met us and we cooked for her. Once. Twice. A few more times. We showed her some easy things she could make on her own and bought her a couple of ingredients so she'd try to. This past weekend, we had her and her new beau S over for dinner, and she came straight into the kitchen to watch, ask, and learn. It was awesome. We are both teachers in real life, after all. 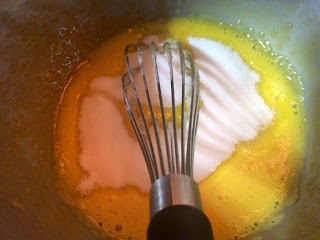 E watched intently as we prepped the beautiful Porterhouses we had bought at Bogner's, our favorite butcher shop. We did two preparations (not just for variety, but for the sake of learning!) - one marinated then grilled, and the other grilled then basted in garlic and rosemary butter. We showed her how to make our pan-fried camembert appetizer, this time with panko rather than plain breadcrumbs. For side dishes, we had Chris's famous potato pave (Amy's favorite) ready to go, but asked E to re-create the first recipe we ever taught her, green beans blistered in ghee with mint. It was quite the feast, and we glanced at each other, satisfied and happy, as we saw E's plate utterly cleared except for a nearly-gnawed-clean T-bone. 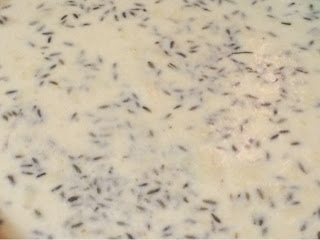 That brings us to dessert, which we had to prep ahead of time because of its nature. However, we chose it because it is made with one of E's favorite things, lavender. Dried lavender (remember to use only culinary lavender) infuses this velvety classic custard with an intriguing scent and subtle flavor. Wouldn't this be a lovely little Valentine's Day dessert? E, this one's for you. 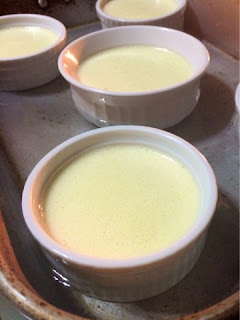 Cook's note: keep your egg whites in the fridge for omelets the next morning, or to make 2 batches of meringue cookies.

Preheat oven to 300 F. In a medium saucepan, combine the cream and lavender blossoms. Place over medium heat until small bubbles form around the edges of the pan. Remove from the heat and allow to cool to room temperature. Strain through a sieve and discard the lavender. In a medium bowl, whisk the egg yolks until pale in color. Whisk in the granulated sugar until dissolved, then very slowly whisk in the lavender-flavored cream. Divide the mixture into ramekins and place ramekins in a baking dish. Pour warm water into the baking dish to come halfway up the sides of the ramekins, then place baking dish in the oven. Bake for 30-40 minutes, until firm. Remove from baking dish and allow to chill at least 2 hours. When ready to serve, sprinkle demerara sugar over the top of each custard. Caramelize the sugar until dark golden brown using a handheld blowtorch held 3-4 inches from each dish, or by placing the dishes under a preheated broiler. Allow to chill a few minutes again before serving.

What a great idea to infuse it with lavender!