A Medley of Meringues 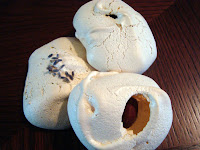 After making a semi-freddo for a brunch dessert, we were left with eight egg whites that we would not let go to waste. It was a bit rainy out and we were having fun in the kitchen, so I thought of my grandmother's recipe for meringue cookies. That recipe calls for three egg whites, so we broke another egg and proceeded to make "A Medley of Meringues." These crisp yet airily fluffy cookies are one of my favorites, and they are also fat-free!

Preheat oven to 375 for 15 minutes only. Beat egg whites and sugar until stiff, glossy, peaks form. Fold in vanilla and chocolate chips. Drop by tablespoon onto a parchment-paper lined cookie sheet. Place in oven and keep oven on for only five minutes. Turn oven off and leave cookies in for 6-8 hours WITHOUT OPENING OVEN DOOR. Store in an airtight container.
But we had three times as many egg whites to work with. So we tripled the amount of sugar to match the amount of egg whites and beat it until it formed stiff, glossy peaks. But we had only 1/2 bag of chocolate chips. So we split the meringue-sugar mixture into thirds and made only one batch of the classic vanilla and chocolate chip meringues. These came out perfectly and grandma would have been proud.

With the remaining mixture, we experimented a bit with some ingredients we had around the house. Our second meringue in the medley, therefore, was almond. We substituted almond extract for the vanilla, left out the chocolate chips, and stuck a roasted, salted almond on top of each cookie in that batch. The taste was excellent, but the almonds sank, making holes on the top but leaving a surprise nut inside the cookie.

Finally, our third meringue was lavender. We ground some edible lavender buds to equal two tablespoons' worth and substituted that for the extract. Again we left out the chocolate chips, and we topped each cookie in that batch with a pinch of lavender. Unfortunately, because our oven is small, we put these toward the bottom of the oven, and the bottoms burned. However, the tops tasted great and the cookies smelled fantastic.

What did we learn from our endeavor? That my grandmother's basic meringue recipe leaves a lot of room for creativity and experimentation, which is awesome, because if it's one thing we love, it's experimenting in the kitchen (obviously!). But also that meringues need to be done in small batches and shouldn't be crowded into the oven. So next time we have that many egg whites, we'll put a few in the freezer to save for another rainy day.
Posted by Amy at 6:06 AM

Fat free!?!?! Who are you and what have you done with my friend Amy??

They look like sculpture -- very cool. I think our kids would have fun getting creative with your recipe.

Aah meringues..Will I ever summon the courage to try them, I dunno. Everytime I see a meringue recipe, I cant wait to try it but then chicken out in the last minute!