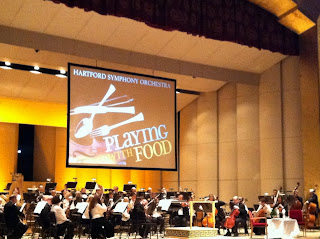 Can music make a dish taste different? Can you create a dish inspired by a musical composition? The answer to both questions is a resounding "yes," as Amy discovered when some friends invited us to the Hartford Symphony Orchestra's uniquely creative "Playing with Food," part of the 2012-13 Pops! series. Chris had to miss it for a stag (our niece is getting married) but Amy didn't mind being the third wheel and tagged along for a beautiful spring evening at The Bushnell. It seems HSO's conductor Carolyn Yuan is a fan of such shows as Top Chef and Iron Chef, and one day it came to her that her perfect "secret ingredient" for a dish is music. That thought was the essence of a performance that titillated all of the senses and blended them into an amazing musical menu.

Close your eyes, use your foodie imagination, and click on the links to the MP3 (the closest we could find to an orchestra) to hear the music. Perhaps you, too, will be inspired! And please pardon the lack of pictures - photography was not allowed during the performance, of course.

The set-up: In front of the orchestra and slightly off-center was a table set for two, while above the musicians hung a large screen that read, "Playing with Food." The night began with the familiar Aaron Copland's Hoe-Down (from Rodeo), easily recognized from those beef commercials. As the orchestra played the lively tune, pictures of the five featured Hartford restaurants came up on the screen. When they finished, Yuan introduced her idea. She explained that went to each of the restaurants' chefs, brought them a piece of music and asked them to come up with a dish inspired by that piece, dishes that would taste how they thought the music sounded. In turn, Yuan chose a work inspired by a dish she chose from their usual menu, so that each restaurant had two featured dishes. As the orchestra played each piece, foodie-porn-worthy images of the makings of that dish danced across the screen, inducing hunger in the members of the audience. After their two dishes, Yuan sat with each restaurant's chef at the table and had a short chat about the music and the food and the restaurant.

Yuan seemed well familiar with the Rose Pasta from the menu at Salute! This classic, creamy, comfort food dish of four-cheese tortellini with onions, garlic, mushrooms, spinach, sausage and cream, she said, tastes like the classic, smooth-sounding Moon River by Henry Mancini. For his part, inspired by the William Tell Overture by Rossini, Chef Sean Jarvis created a Peppercorn-crusted Shrimp with Brandy over Linguine. As the music played, we saw chef flambee the shrimp in the brandy, douse it with cream, and could match the excitement of that action with the music.

When Amy heard the first notes of  In the Hall of the Mountain King from Grieg's Peer Gynt, she immediately imagined a giant lobster lumbering his way along the ocean floor. Apparently, so did Chef Jordan Stein of Pond House Cafe and Pond House Grille who created a Lobster Johnny Cake with a Spicy Habanero Jam that certainly builds up in heat just as the music does. After Yuan tasted Stein's Pomegranate Cheesecake Spring Rolls with Five-spice Caramel Dipping Sauce, she was reminded of Leonard Bernstein's Overture to West Side Story - it opens with a pop (the crunch of the spring roll), is smooth in the middle (the cheesecake) and it ends with a party (the explosion of flavor in the caramel sauce).

Right before intermission, Yuan asked the audience: "What does the theme to Mission Impossible taste like?" It seems she asked the bartenders of Max Downtown the same question, and they came up with the "Evil Hendricks," named after M.I. antagonist Kurt Hendricks and made with St. Germain elderflower liqueur, Hendrick's gin, blood orange liqueur, club soda and cucumber. These were available during intermission for a special $10 donation to the HSO's education and community programs, and were well worth it. So tasty, clever and spy-like!

The next restaurant to be featured was Peppercorn's, and we have eaten there often. One of our favorite dishes at Peppercorn's is the Osso Buco, which apparently reminds the HSO conductor of Johnny Mercer's Hooray for Hollywood. This is a seared veal shank braised for 8 hours in herbs, vegetables, white wine and stock, then served over creamy mashed potatoes. It's an impressive dish, worthy of a star on the Walk of Fame! The piece Yuan gave to Chef Dino Cialfi was Giuseppe Verdi's Brindisi from La Traviata. It's a drinking song, and made Cialfi envision springtime in the Italian mountains. His dish was a colorful pasta medley of Arugula, Saffron and Heirloom Tomatoes served over pasta and topped with a "snow" of shaved parmesan cheese. It was truly lovely.

Firebox was the fourth restaurant and the chef there, Sean Farrell, chose his own piece of music - Take Fave by Dave Brubeck. He explained how much he liked the artist when he was younger and how Brubeck was known for his improvisational skills - much like a chef in the kitchen. To go with Take Five, he made Stonington Scallops in a cast iron pan with asparagus; it was a gorgeous, simple, seasonal dish, like most things at the Billings Forge neighborhood restaurant. Back in February, Yuan dined on Firebox's Marwin Farm Duck with cauliflower puree, roasted Brussels sprouts and baby carrots. That same dish is now, in springtime, made with sunchokes, English peas, mushrooms and preserved blueberries to showcase the season's bounty. This reminded the conductor of Beethoven's Merry Gathering of Country Folk - pastoral, rustic, earthy, like a breath of fresh air.

And finally, it was Chef Hardman's turn. The pastry chef of Max Downtown was given Sicilienne from Pelleas et Melisande by Faure and said all he could imagine was Monet's water lily paintings. So he created a flowery dessert as calming as the music, a lily-shaped bowl filled with berries and rosewater whipped cream. In opposition was his second dessert, as layered and powerful as the symphonic Overture to Light Cavalry by Franx von Suppe - the Chocolate Raspberry Marquise, consisting of layers of chocolate - brownie, chocolate mousse, ganache, chocolate pearls and meringue. Miniature versions of these two desserts were available for purchase as audience members left the hall, which was a really nice touch!

The clever connections between menu and music, the drool-worthy photos, the inspiring sounds of the symphony and the intriguing chats with the chefs. All made for a fantastic night for music lovers and foodies alike. We can't wait for next year's version, scheduled for April 26, 2014. 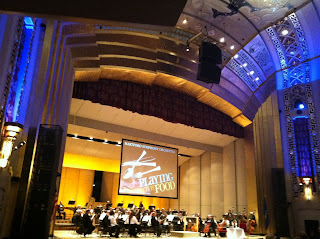 What an experience! Fascinating.