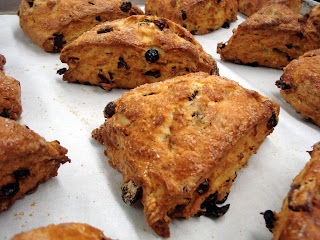 A couple of weekends ago, we took another baking class at Manchester Community College (our local community college, well-known for its culinary program). This one was with the same instructor (Chris French) as the pizza and focaccia class. Obviously we were so pleased with the first class, we had to sign up for another, and obviously, our baking skills could use some work. 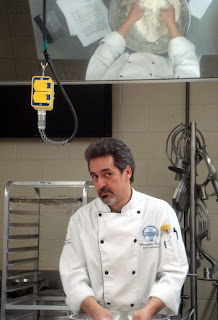 This class was called, "Baking for English Tea," and it started off with some clarification about English tea, mainly that what people often refer to as "high tea" is actually a less formal, dinner-type setting whereas a tea at which there might be sweets and pastries is traditionally the more formal "afternoon tea." Who knew? The class would focus on the latter, with the goals being to learn and participate in making scones, shortbread, and cream puffs, and to learn via demonstration how to make lemon curd, Devonshire cream, pastry cream and an English trifle. Quite ambitious, but we had five hours together, so we forged ahead. 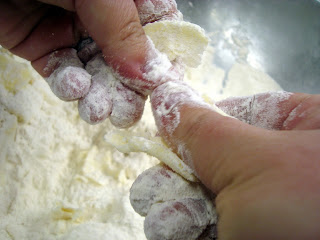 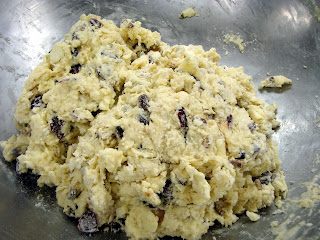 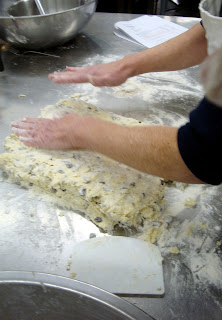 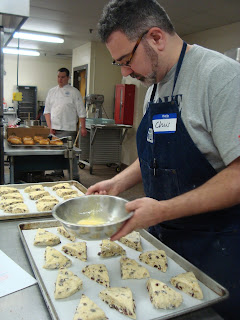 Chris tops his scones with some sanding sugar

First we watched as Chef Chris demonstrated and explained how to make scones, and then we paired up and made our own scones with cranberries and walnuts. The most important thing with this recipe was that we hand mixed the scones, learning how to rub the butter in by hand, which is not as easy as it sounds, but definitely leads to better results. We could choose whether to bake our scones during class or take home the dough to freeze, but since we are "A Couple in the Kitchen," we were able to do both. The scones were fluffier and lighter than we've had in the past, thanks to the hand-mixing method we guess, and we would certainly try the recipe again. When we do, we'll share it with you. 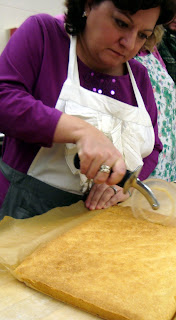 Next thing we did was make shortbread. Now we have tried shortbread in the past, with relative success, but ours simply does not compare to the buttery crisp amazing cookie we learned in this class. We look forward to topping a sheet of these with some homemade jam or lemon curd and making delicious bars to share with the neighborhood!!! 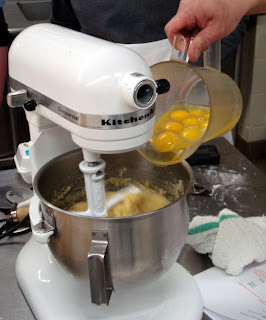 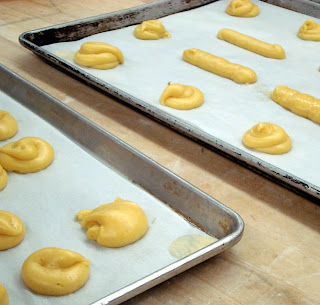 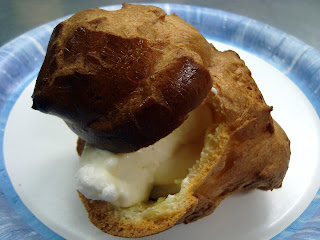 Pate a choux (cream puff dough) we are well familiar with, thanks to Dorie Greenspan and her gorgeous gougere recipe. But we learned a few tips on how to improve our technique, such as using bread flour instead of all-purpose flour, getting a good sheen on the dough by adding in an extra egg, and piping the dough when it's warm and fresh. 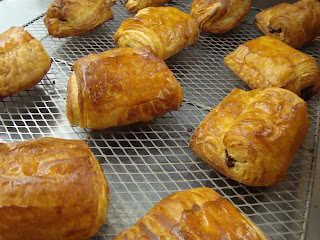 The scones had been set aside to eat later along with the various curds and creams, and everything else was in the oven. Luckily, Chef Chris was thoughtful enough to bring in some of his homemade chocolate croissants for us to nibble on in the meantime. Just look at these beauties! 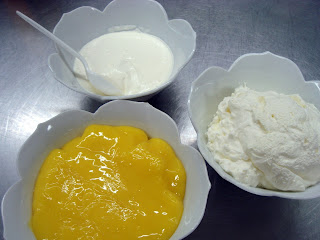 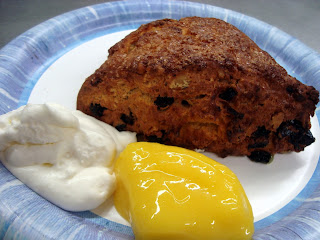 The reward for a hard day's work

When the hands-on part of the class was done, we fixed tea and sipped while Chef demonstrated his recipes for pastry cream, lemon curd, and "mock" Devon cream (aka clotted cream). The real Devonshire cream runs for about $7 for a small 4-ounce jar, if you can even find it. Chef's mock version can be made in about 10 minutes and costs a fraction of real Devonshire cream. Here's what you do:

Using a stand mixer with the whip attachment, beat the cream cheese until it is smooth and lump-free. Add the cream and beat until stiff. Chill before serving. 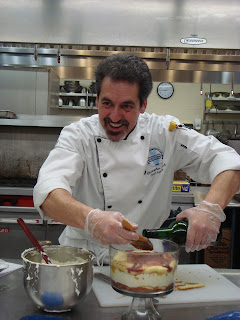 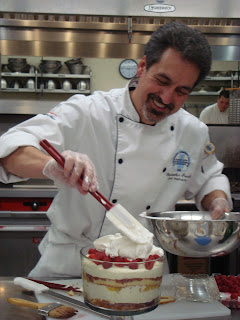 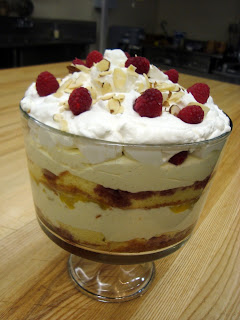 Finally, we tried all of these goodies while watching Chef assemble a beautiful English trifle. We met some great people, had a fun day, and learned plenty of new tricks and tips to help up become better bakers. These recipes would be perfect for Easter, Mother's Day, or just for hosting your own English tea! Once we try any of these things at home, we will be sure to let you know.

If you are interested in taking a credit-free culinary class at MCC, here is a link to the credit-free catalog. 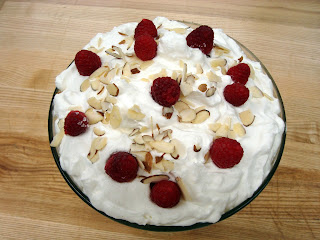 What a great class--with recipes, it seems, that can be go-tos. May have to take a look at the course catalog.

PS I heart scones, so feel free to share when you bake that frozen dough, ;)