Cooking Class: Pizza and Focaccia (with recipes for pizza dough and sauce)

Mid-December, the two of us took a one-day cooking class at our local community college. The class was titled "Pizza and Focaccia" and it was taught by the adjunct instructor of baking and pasty at the college, Chris French. Of course, the two of us have made pizza before, but we are ashamed to say that we usually buy the dough from our grocery store or local market and then simply grill or bake it with our toppings. No more! In this class, we learned the ins and outs of making deliciously fresh pizza dough and focaccia, and enjoyed it so much Chris bought Amy a pizza peel for Christmas! So of course, we are excited to share what we've learned, with permission from the instructor. 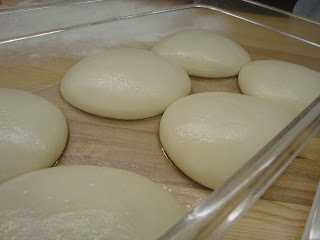 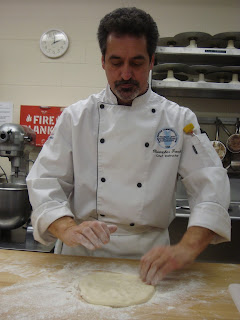 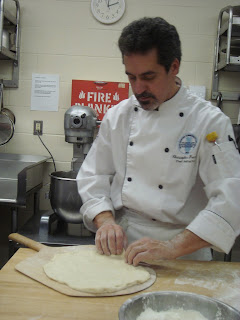 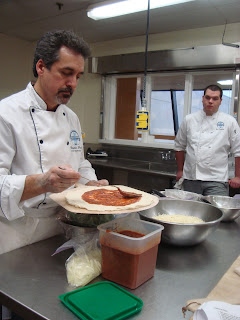 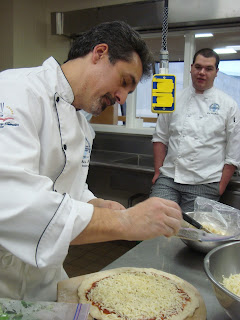 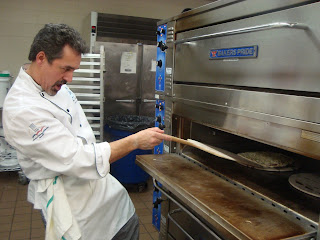 Speaking of instructors, Chef Chris was an amazing one in that he was well-prepared with a packet that included all the information we would need, including several recipes and resources for ingredients. He walked us through each and every step of pizza and focaccia making, including the dough, the sauce, the cheese, the toppings and the various ways to cook it all. He explained the "what are the different kinds" and "why you'd use one or the other" of each ingredient, demonstrated to us exactly how to make and shape the dough and then paired us up and allowed us to make it ourselves under his guidance. Amy made a plain cheese pizza and Chris made pizza margherita. Best of all, we went home with enough dough for 4-6 pizzas (depending on the size of the pizza) as well as more focaccia than we knew what to do with! 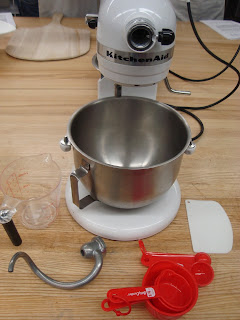 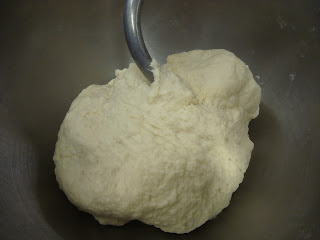 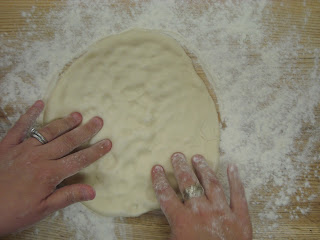 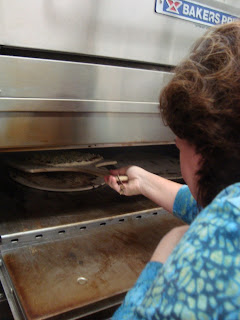 Here's what we learned about pizza making: First of all, the type of flour does matter. Chef Chris suggested using either King Arthur Bread Flour, or Caputo "00" flour, and had us make a batch of dough with each. We found both resulted in a flavorful dough that was crisp and blistery on the outside, and perfectly chewy on the inside. Since we can readily find King Arthur at the grocery store, that has become our go-to flour. Secondly, San Marzano tomatoes, even in a can, make a fantastic no-cook pizza sauce. Just a few additional ingredients from the spice rack is all you need to transform a can of tomatoes into an easy, zesty sauce. Thirdly, brown rice flour is an excellent choice for dusting your surface/pizza peel as it doesn't burn. And finally, a really hot pizza stone inside a really hot oven will give you the best results. Heat the stone at 500 degrees for about 45 minutes before putting your pizza on it, then bake your pizza on it, also at 500 degrees. 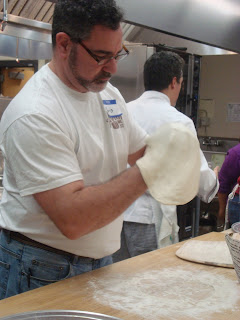 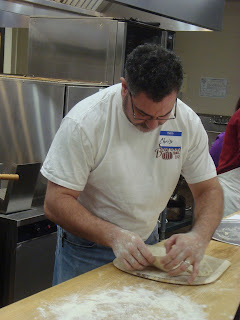 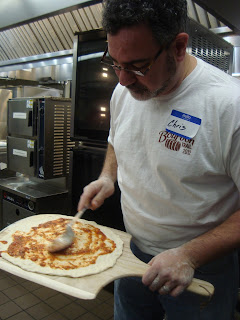 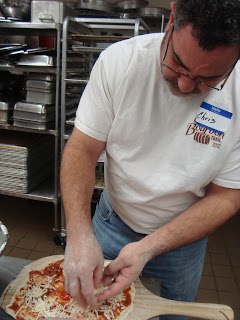 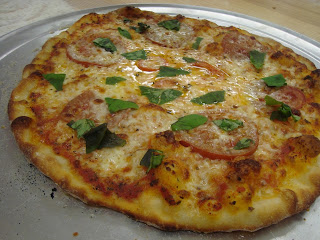 Something we already knew, but it was nice to be reminded about: Creativity is key to pizza topping. Savory? Sure - cheese, meats, spices, vegetables, herbs - anything can top a pizza! A touch of fennel powder recreated the flavor of sausage without the meat. We even made a peach pizza with a marscapone cheese that would make for a crowd-pleasing dessert. 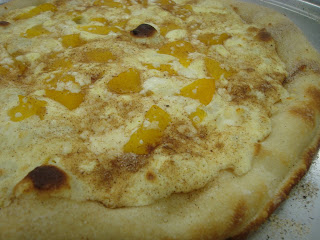 Admittedly, the pizza making took up most of the time allotted to the course, but Chris had made the focaccia dough ahead of time (giving us the recipe in our packets) and we simply spread the dough on large baking sheets and allowed it to rise before we topped it with truffle oil, chopped rosemary, caramelized onions, grated parmesan cheese, and a little salt and pepper. Watching sheet upon sheet of golden brown tastiness cook in the industrial oven was almost as fun as using the pizza peel! 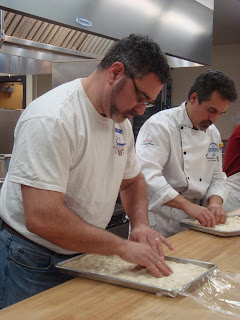 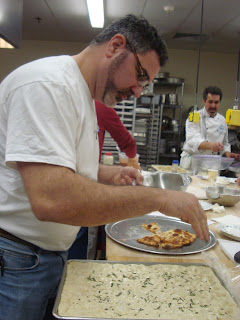 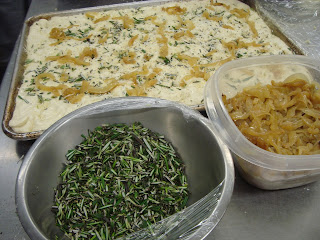 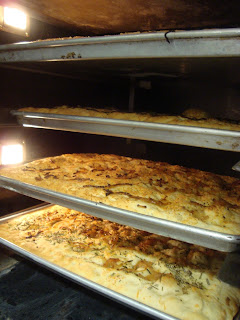 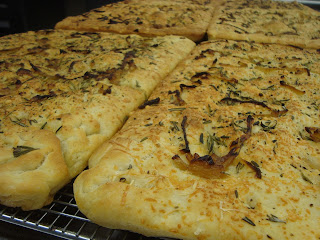 Chris French's Pizza Dough
(cold fermented means it must be made at least one day ahead; makes 3 pizzas)

Place the following ingredients in the order listed to the bowl of a Kitchenaid-type mixer: water, yeast, flour and salt. Install the bowl into the machine and mix using a dough hook (the spiral hook works better than the "C"-type hook) on speed 1 or 2. Mix until all ingredients are "picked up" and the bowl is nearly clean. Shut off and unplug the machine; scrape down the bowl if necessary. Plug the machine back in and resume mixing for another 2-3 minutes. Stop the machine and rest the dough for 10-20 minutes. Mix the dough again on speed 2 for another minute. Remove the dough from the bowl and round into a ball. Place the dough ball into a lightly oiled bowl large enough to hold 3 times its size. Roll the dough ball so it's coated with a light film of oil. cover the bowl tightly with clear wrap and place on counter for 1 hour. After the dough has rested on the counter for 1 hour, remove from bowl and divide into 3 equal sized pieces. Roll the individual small dough pieces into rounds. Place the rounds in a shallow, lightly oiled tray and cover tightly with clear wrap or a lid. Place the tray immediately in the refrigerator for 24-96 hours until ready to use. Remove the tray from the refrigerator 1-2 hours before baking pizza (it's recommended to preheat pizza stone/oven around the same time). 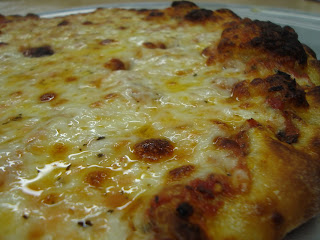 Lightly blend or process the tomatoes into a coarse texture. Remove the tomatoes from the blender and combine with all of the remaining ingredients, adjusting the salt to taste. Allow the sauce to stand overnight in the refrigerator so that it can tighten up slightly. If sauce is too watery it can be strained and dried out by using a doubled cheese cloth and colander. 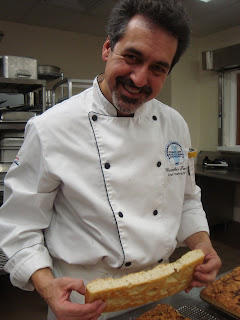 Special thanks to Chef Chris French for the amazing class and permission to use his recipes here.

I've been looking for a good pizza sauce recipe. Thanks for sharing!