A Taste of Greece at the Odyssey Greek Fest 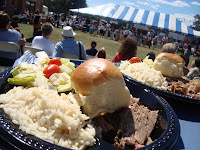 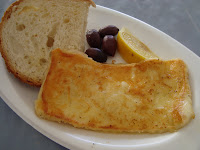 We arrived shortly after the festival opened and our ears automatically tuned in to the sounds of Greek music. Our stomachs, however, had their own priorities. First on the list, a taste of saganaki, a sharp table cheese that has been dusted with flour, pan-fried, finished with lemon juice and Ouzo, and served with Kalamata olives and sesame bread. The crisp, warm cheese had a distinct tanginess that was favorably enhanced by the lemon/liquor finish. We could eat this every day! 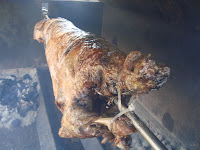 We waited patiently while the hard-working chefs of the day labored over our main course, served only at certain hours: whole lamb souvla - lamb roasted on a spit for over seven hours, basted over and over again with an herby lemon butter. The scent was intoxicating, albeit smoky! Catching the eye of the person plating the food, we begged for morsels of the crispy skin. We found a spot on the lawn to eat while enjoying the Greek dancing show. The lamb was incredibly succulent, fork-tender and flavorful. The only thing that could have made it better was some good Greek wine!
With full bellies, we wandered over to a cooking demonstration where we learned how to make a traditional walnut cake called karydopita. We didn't think we could eat anything else, but when they offered a taste, we couldn't resist. Rich, nutty, moist...Yes, we'll be making that cake at home soon enough!
Delightful food, great music and entertainment. Opa! We'll be back next year!!!
Posted by Amy at 4:38 PM

That sounds like a wonderful time...and love the food :)

I miss Greek Food Fesitvals. Thankfully the annual festival here in Las Vegas in Sept. 23-26. I am so looking forward to it. It will be a post on my blog there after.

Looks amazing. I love greek food. I wish could have gone.