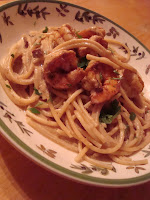 Chris came upon one of Emeril's shows while channel-surfing the other day. He didn't catch the beginning, but it seemed to be some sort of "hot and spicy" cooking contest. It was the last contestant's dish that really caught his eye: a spicy Cajun shrimp alfredo. He DVR'd it, and when I entered the living room, he looked at me with a twinkle in his eye and asked me to grab a pen and paper. We did our best to jot down everything Emeril did to recreate the dude's dish but forgot to take down the contestant's name. We cooked it the next night, and here's our version of it. It has many layers of flavor, from the heat of the spices to the smokiness of the andouille, as well as texture, from the bite of the shrimp to the creamy cheesiness of the sauce to the al dente pasta. This one is a keeper. Way to go, guy from Emeril's show!!!

In a large, deep skillet, render the diced andouille in one tablespoon of olive oil over medium-high heat. Add the chopped onion and cook for four or five minutes. Add the chopped garlic and red pepper flakes and continue to cook so the andouille starts to caramelize. Meanwhile, put the pasta water on to boil. Coat the peeled shrimp with two tablespoons of Cajun seasoning and set them aside. Deglaze the sausage/onion/garlic pan with the Worcestershire sauce and cook for two minutes, stirring. Add the milk and half-and-half to the pot and continue to stir and cook. Add the butter and parmesan cheese and lower the heat on the sauce to simmer. Cook the pasta according to the directions. In a separate skillet over medium heat, saute the shrimp until they turn pink. Toss the drained pasta in the sauce and serve the cooked shrimp on top. Garnish with some parsley and serve with crusty bread.
Posted by Amy at 2:11 PM