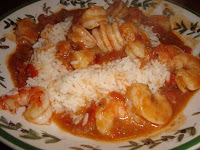 It was recently Mardi Gras, so of course, I've been reminiscent of my time in New Orleans, particularly missing the wonderful food that city has to offer. One famous dish to come out of NOLA is Shrimp Creole, which is shrimp cooked in a spicy sauce of tomatoes, green peppers, celery, onions, garlic, and miscellaneous herbs and spices, then served over rice. It's not a difficult dish to make by any means. However, one hot and humid day when I was out "making groceries" at the Schweggman's near my apartment, I discovered Zatarain's.

Earlier that morning, the shrimp guy had come down the street selling gorgeously plump shrimp out of a cooler from his pickup truck for a mere $2 a pound and I couldn't resist (who could???). I was craving Shrimp Creole, but it was too hot to cook, so I thought I'd cheat. I bought the "Shrimp Creole" box mix (~gasp!~) made by Zatarain's. All you had to add was some butter, tomato sauce, and, of course, your shrimp, and it only cooked for about 1/2 hour - not long enough to heat up my kitchen. It was just so easy.

I invited my then (now, sadly, late) boyfriend over for dinner. He was a cook, so I felt I had to hide all traces of my cheating ways (the Zatarain's box and the empty jar that held the marinara I had used). I served him the Shrimp Creole and waited for him to give me some constructive criticism, to call me a "Yankee," to teach me the "right" way to make this dish. Instead, he ate wholeheartedly and even asked for seconds. Then he told me it was the best Shrimp Creole he had ever had (except for his mom's, of course - he was a Southern boy, after all).

Over the four years I dated T, I made Zatarain's Shrimp Creole countless times, always hiding the evidence, but rarely feeling guilty about it. Eventually, our relationship ended and I moved back to New England. I tried to make "homemade" Shrimp Creole one time and didn't like it at all, so I'm back to Zatarain's, and I make it regularly. If it was good enough for T, it's good enough for me.
Posted by Amy at 10:08 AM