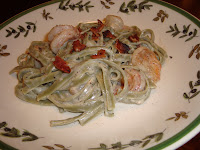 Given that my husband and I are trying to lose a few pounds, "Shrimp and Spinach Fettuccine Alfredo" doesn't seem like your normal diet food. Nonetheless, I think making small changes is the surest way to stick to "a plan," so that it doesn't seem so much like "a plan," but a new-and-improved way of cooking and eating. At least, that's what seems to be working for us at this point. After a hard week at school (exams and all that), I was craving comfort food, and for me, that means pasta, in particular creamy pasta (think my mom's macaroni and cheese - delicious and satisfying but laden with fat and calories). I was thinking of making fettuccine alfredo. Now you may be asking yourself, "What is light about fettuccine alfredo?" Well, that's the challenge. I made some minor changes to my usual recipe by removing butter and oil, using Simply Smart fat free milk (which Chris and I like more than usual skim), and using spinach fettuccine instead of regular pasta for a vegetable boost. Both of us were pleasantly surprised at the excellent flavor, so much that this new way of making alfredo may become our usual way. Isn't that the point?

Ingredients:
Note: This recipe made enough for two dinners and lunch-sized leftovers for one.

Prepare the pasta according to package directions. In a medium-sized sauce pan, cook the bacon and remove it, leaving the drippings in the pan on medium-high heat. Add the shrimp and garlic to the pan and cook until the shrimp is pink, 2-3 minutes. Take the shrimp and garlic out and set aside in a small bowl. Add the flour to the pan and season it with the salt and pepper. Stir it over the heat for 30 seconds, then slowly whisk in the milk. Put in the pinch of nutmeg and cook the milk about four minutes, stirring often, until it thickens. Remove from heat and stir in the parmesan cheese. To serve, toss the pasta, shrimp and milk mixture together with the bacon crumbled on top.
Posted by Amy at 11:32 AM