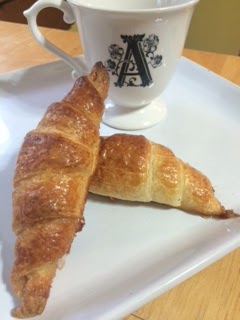 Have you ever used that not-to-be-named-brand's refrigerated dough-in-a-can? While the popping noise the can makes is fun, and people certainly do some culinarily creative things using that dough, personally we've never entirely loved the resulting pizza crusts, breadsticks, biscuits or croissants. We always found them to have a certain heavy, chewy, tough doughiness rather than the desired crustiness or flakiness we crave. So we hardly ever buy refrigerated dough.

Then a few weeks ago, we received an email asking if we'd like to be visited by the Wewalka Wagon. And we were like, "Sure! Who wouldn't?" Then we wondered exactly what a "Wewalka Wagon" was. So we did what people do now, which is to Google "Wewalka" and we found that Wewalka is a family-run European brand of refrigerated bakery-style dough that was introduced in the US in 2015. They make croissant, puff pastry, bistro-style (thin) pizza, and family style (thicker) pizza doughs. Their doughs are created from traditional European recipes using premium ingredients (no bleached or bromated flours, no hydrogenated oil or high fructose corn syrup) and with clean, renewable energy. We were quite pleased with ourselves for being willing to welcome the Wawalka Wagon (say that three times fast)!

A few afternoons later, this pulled up outside of our house. We can only imagine what the neighbors were thinking. 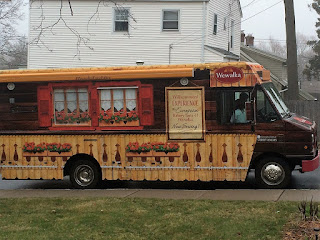 The driver and his co-pilot came to our porch, smartly dressed in aprons and bakers' hats, and delivered a box and a bag filled with goodies. In the box were these beautiful palmiers swirled with tiny bits of ham and grated parmesan cheese. They were crisp and flaky and flavorful and the two of us came awfully close to finishing them all that same day. In the insulated bag was one of each type of refrigerated dough Wawalka makes (see above). They also gave us some coupons and recipe cards, and invited us to visit the website for more (as if we hadn't already ha ha). We like the Wewalka Wagon! 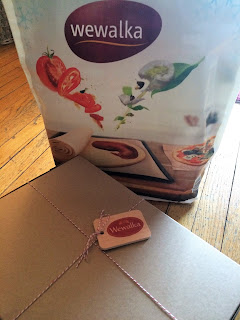 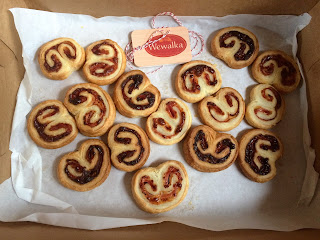 When our new friends left, we gave our gifts a closer inspection. The first thing we noticed was the packaging, which is no less than brilliant. The delicate dough is rolled in parchment paper, which alone is amazing, because you don't need to use your own! You unroll the dough, parchment and all, create your recipe, then bake it on a pan. No badly flavored cooking sprays or butter to add extra grease, still no sticking, and clean-up involves wadding up the parchment and throwing it away. Love. It. Even more brilliant is the outer package which has a one-way valve that releases the carbon dioxide created by the yeast. It's the perfect living environment for the dough. The package ensures that the dough stays fresher longer, maintains its ability to rise properly, and (most importantly) tastes better than its canned competitor. 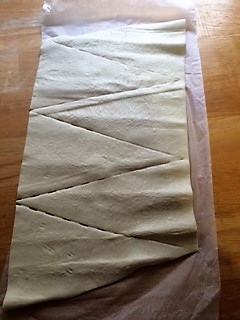 We decided that the best starting taste test of Wewalka dough would be the croissants, especially since Amy just learned how to make croissants by hand. We also decided our first recipe should be simple so that the dough flavor wouldn't be masked by too many other ingredients. Therefore, one morning shortly after our Wewalka Wagon visit, we unrolled the parchment-lined croissant dough, which consists of six perforated triangles, and placed it on a baking sheet. We spread half with fig jam and the other half with melted butter sprinkled with cinnamon-sugar. Then we separated them, rolled them into their horned shape and brushed them with beaten egg. That took about 5 minutes. We baked them at 400F for 15 minutes (as instructed on the package) and voila! We had warm, airy, flaky croissants in about 20 minutes total time. We immediately imagined future concoctions, first chocolate and almond and other sweet, breakfasty croissants. But soon after that, we were dreaming of savory delights like broccoli and cheddar, meatball and ricotta, and crab and avocado. Endless mouth-watering possibilities. 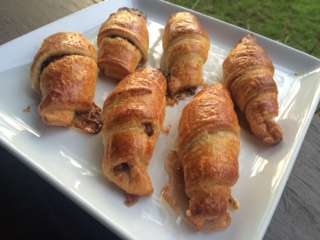 Suffice it to say, we won't be buying canned croissants ever again. Not. Ever. If we're not going to make them from scratch, we're using Wewalka. And we liked those croissants so much that we are already thinking up recipes for the other types of dough. There's a whole lot of inspiration to be found on their website, too. Welcome to the U.S., Wewalka! And thanks for paying us a visit!

Disclaimer: We received free samples and coupons from Wewalka as stated above. However, all thoughts and opinions stated here are our own and we were not paid to publish this or to post only positive comments. 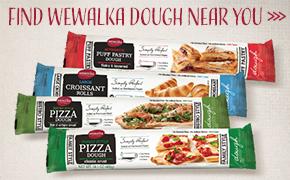 They carry in our area! Will gave to try.