The Connecticut Farm Table Cookbook: Q and A with Author Tracey Medeiros and Book Giveaway 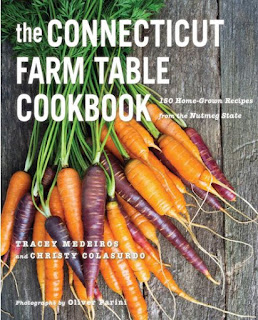 The Connecticut Farm Table Cookbook (The Countryman Press, May 2015), co-authored by Tracey Medeiros and Christy Colasurdo, skillfully celebrates and honors the various flavors and food traditions of the Nutmeg State. Connecticut has over 360,000 acres of farmland, and with dynamic communities devoted to it, it is one of the hubs of the farm-to-table movement in America. This is the book's focus, featuring 150 recipes culled from the state's own farmers, fishermen and chefs, and bringing a true taste of Connecticut to its readers. Along with each recipe, there are inspiring stories about the farms, individuals, and/or ingredients that created it with stunning photographs that grace nearly every page. The cookbook is a must-own, not only for CT natives, but for anyone passionate about making inventive seasonal food with locally produced ingredients. 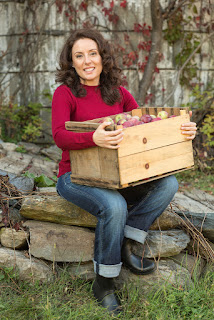 We had a recent Question-and-Answer with author Tracey Medeiros, a food writer, food stylist, and recipe developer and tester. She writes "The Farmhouse Kitchen: A Guide To Eating Local" column for Edible Green Mountains magazine, and is also the author of The Vermont Farm Table Cookbook (The Countryman Press, May 2013) and Dishing Up Vermont (Storey Publishing, April 2008), honored as 2010 National Indie Excellence Awards Finalist and 2009 Best Books Award Finalist (USA Book News). She travels regionally as a guest cooking instructor sharing her commitment to the sustainable food movement while providing skillful cooking demonstrations. To learn more about the author go to: www.traceymedeiros.com or The Connecticut Farm Table Cookbook’s YouTube Channel. Along with co-author Christy Colasurdo, an award-winning CT food writer, she now turns her attention southward toward the Constitution State in The Connecticut Farm Table Cookbook:

Q.  Why did you decide to write this book?

A.  My inspiration for writing all of my cookbooks has always been the desire to promote community wellness through the process of growing food in a healthy, responsible way.  This has been my message in each of my books and a lifelong purpose. Every person that has been featured in my cookbooks has deeply inspired me by the work that they do. Their dedication and strong commitment to preserving their state’s agricultural way of life through the support of the local food culture is truly amazing.

I met my coauthor, Christy Colasurdo, at the Simon Pierce retail stores in Connecticut during a day of promotional touring. At that time I was hosting book signing events for my first cookbook, Dishing up Vermont. Christy was at the events promoting her business. She had contributed a recipe for my second cookbook, The Vermont Farm Table Cookbook, and thought it would be great if we both joined forces to collaborate on a cookbook that celebrated Connecticut. If not for Simon Pierce, The Connecticut Farm Table may not have become a reality. Thank you, Simon!

Q.  What exactly do you mean by “Farm Table,” or what types of recipes would you characterize as “Farm Table” recipes?

A.  For me, the term "Farm Table" embraces the various stages of food production before it reaches the consumer's table. It illustrates a direct link between the farm and the use of the freshest ingredients - highlighting seasonality, local availability, and a relative ease of preparation.

Q.  What was your favorite part of writing the book?

A.  Writing The Connecticut Farm Table Cookbook has given me the joyous opportunity to connect with many of the Nutmeg State’s hardworking farmers, chefs, and food producers. Their passion for what they do shines through in their strong commitment to preserving Connecticut’s agricultural way of life by supporting the local food culture. Receiving deliciously creative recipes, which demonstrated how others use locally sourced ingredients, was the other favorite part of writing the cookbook.

Q.  Was it difficult to convince these restaurant chefs to “give up” their recipes?

A.   Due to the generous nature of the farming community, it was not difficult to convince farmers and chefs to contribute their recipes for the cookbook. These talented individuals believe in, and support, all that is Connecticut whenever possible.

Q.  In what ways have you noticed the CT food scene changing over the last few years?

A.  The catch phrase, “Buy Local,” has become the mantra of both farmers and chefs.  Knowing that there is a conscious effort on the part of the consumer to maintain a healthier lifestyle, the Connecticut food scene is evolving, embracing the virtues of local, organic, seasonal, and sustainable ingredients. Because of its flourishing food community, Connecticut is the perfect place for the Farm to Table movement to grow and prosper. Its food and farm scene is alive and growing empowered by a mutual desire to bring together consumers, farmers, and food producers in a way that benefits all.

Q.  How can people in CT procure the best ingredients for home cooking, especially in the winter?

A.  Of course, Farmers' Markets are a wonderful resource for procuring the best and freshest local ingredients for home cooking. Fortunately, these markets are held indoors during the winter where folks can buy a variety of root vegetables, winter squash, and an assortment of other produce that keeps well into the winter months.  In addition, canning and pickling are  fun ways to enjoy local ingredients during the winter months.

Q.  If you were to create the perfect CT Farm Table-inspired 3-course menu, what would it be?

A.  There are so many delicious recipes to choose from in the cookbook, which makes choosing just three a difficult decision.  However, if I had to create a winter inspired 3-course menu it would be:

A few days ago, we took Tracey's suggestion and made the Caseus Mac 'N Cheese, perhaps the richest and cheesiest mac we ever had. Here are our photos: 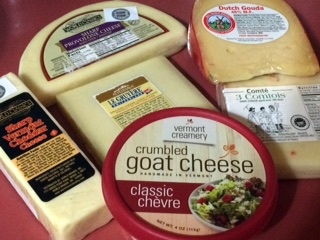 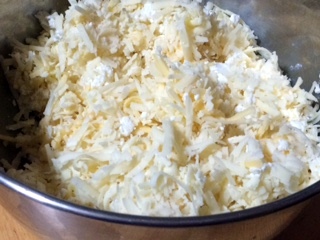 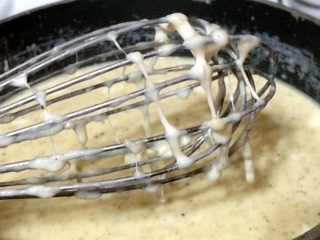 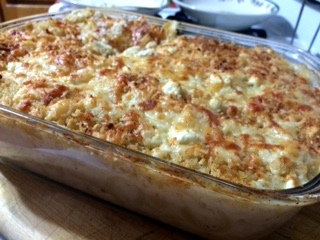 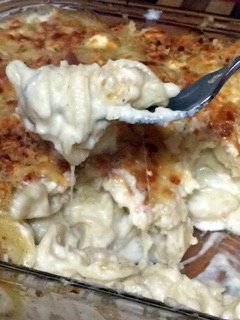 The Book Giveaway:
The Countryman Press, publishers of The Connecticut Farm Table Cookbook, generously provided us with an extra copy of the book to give away to our readers.
To enter, leave a comment on this post and/or follow us on Twitter and/or like our page on Facebook (if you are already following us on Twitter or Facebook, tell us so in a comment).
No purchase necessary to enter or win. Void where prohibited by law. Open to legal residents of the United States only. Odds of winning depend on number of entries received. Winner will be chosen at random. Giveaway ends on Sunday, December 13 at 11:59:59 p.m. ET. Winner will be contacted by email.

Love this cookbook! Beautiful pictures, stories, and recipes. It is a great Christmas gift for anyone who likes to cook and can appreciate local, sustainable, food sources. I follow on Facebook.

I'd love to win this cookbook! It would be a Christmas gift to myself!
And I follow you on Twitter as @Cezovski9
Digicats {at} Sbcglobal {dot} Net