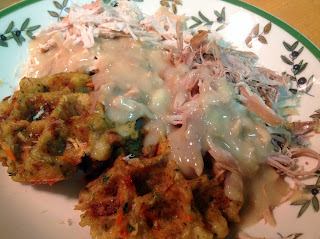 When you don't host Thanksgiving, there are a lot of variables to consider, particularly regarding the availability of leftovers. Will there be any/enough? Will the host be willing to share? Will I get a little of everything, or a lot of one thing, or (horror!) nothing at all? In order to assuage our anxiety, we took advantage of the wonderful chefs and students in the culinary department at Chris's school who were selling both stuffing and gravy available for pickup the day before Thanksgiving. This way, leftovers were a sure thing. 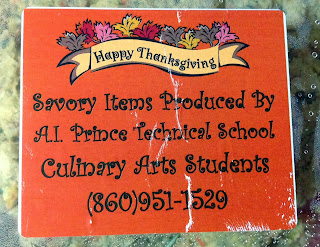 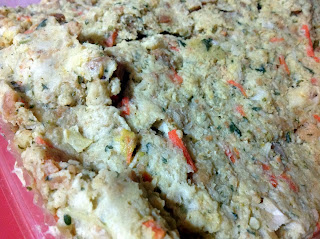 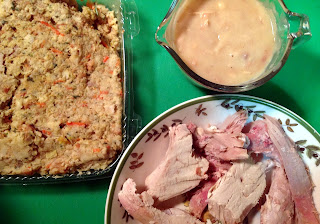 We didn't need to worry so much because, as always, Amy's mom was very generous with her leftover-giving (thanks, Mom!). She cooked at 20-something pound turkey and gave us the carcass to make homemade stock, which will do later this weekend. We nabbed some turkey meat as well, but the stuffing and gravy were scarce, so we were glad we planned ahead. Inspired by the chicken and waffles we enjoyed at The Hidden Still, we planned to make stuffing waffles and top them with shredded turkey and gravy. 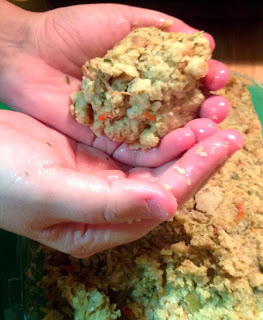 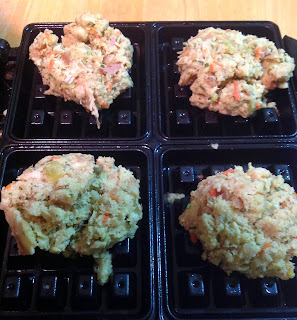 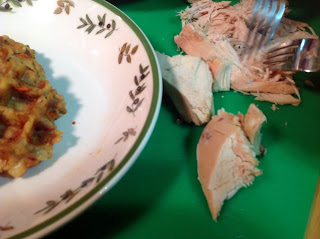 Holy amaze-balls! The cornbread stuffing was delicious on its own - moist, well seasoned, and perfectly savory. But when cooked in the waffle iron, it was incredible, for our favorite parts of the stuffing are the bits from the crunchy, crispy edge - you know, the super browned parts, and in the waffle iron, that happened with every delicious bite. Topped with shredded turkey and hot, thick gravy, this took plain leftover turkey sandwiches to new heights. 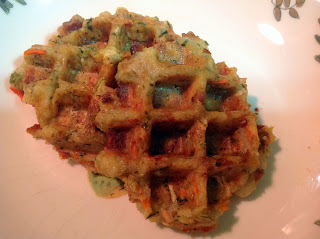 It was so easy, we can't really write a recipe. Here are the steps:

1. Spray and heat the waffle iron.
2. Form leftover stuffing into a medium-sized ball.
3. Place one ball on each part of the waffle iron.
4. Close waffle iron and allow to cook until nicely browned and crispy (about 10 minutes).
5. While stuffing waffles are cooking, shred turkey and heat gravy.
6. Remove waffles from waffle iron, assemble and enjoy. 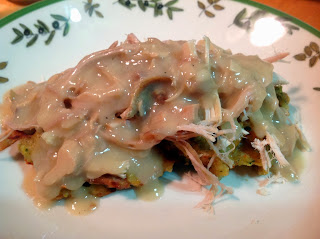 So interesting, while I usually recoil at the thought of Chicken and Waffles, this actually sounds great to me.

I have always fried my stuffing. It's the same as what you did, except throw it in a skillet with butter instead of the waffle iron. It gives that same crunchy texture to it!