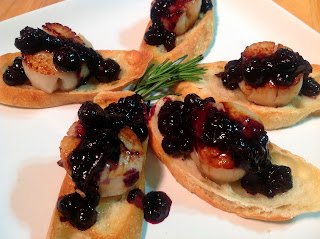 This tasty hors d'oeuvre was inspired by a bright and beautiful nibble we had a few summers ago in Maine and we've decided to enter it into the "Blueberries Meet Their Match" recipe contest. The contest ends tonight, so we're cutting it close, but we've been working on the recipe for a few days and we think we finally have it down. 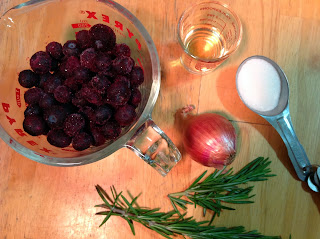 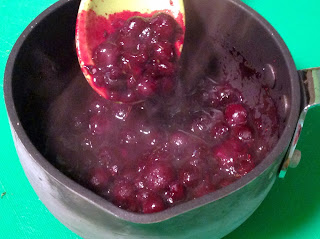 The contest, sponsored by the U.S. Highbush Blueberry Council, which refers to blueberries as "Little Blue Dynamos," required us to use blueberries along with one other intriguing ingredient - coconut, balsamic, bananas, or rosemary. We chose the latter, and used scallops as our protein. Interested? Read on. 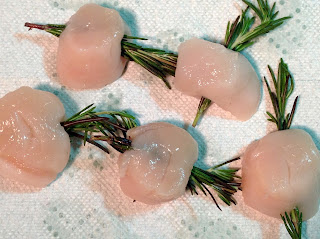 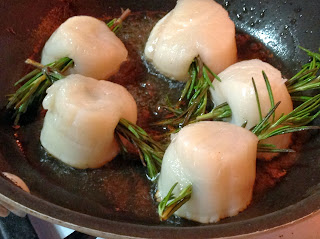 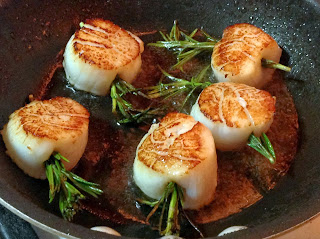 We started by making a sauce with frozen blueberries, shallots, chopped rosemary, champagne vinegar, and a little water. While it cooked down, we skewered our scallops with additional rosemary and seared them in a hot pan with a touch of olive oil. After brushing some baguette slices with oil and browning them, we placed a perfect scallop on each and topped it with the delicious sauce that had notes of tart and sweet that only blueberries could impart. 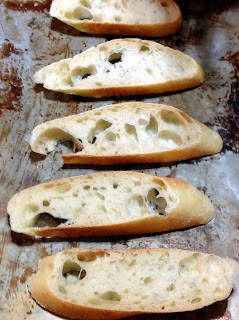 Pat dry the scallops and place aside. Place blueberries, water, vinegar, shallots, and 2 teaspoons chopped rosemary in a small saucepan and cook over medium-high heat until reduced. Season with salt and pepper. Place one tablespoon olive oil in a non-stick skillet and heat. Skewer each scallop with a sprig of rosemary and sear on both sides until nicely browned. Drizzle baguette slices with oil and broil until brown. Assemble by placing one scallop on each baguette slice and top with blueberry sauce. 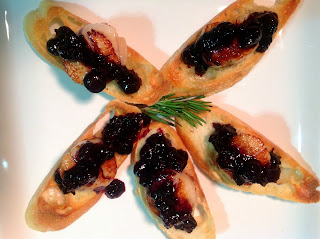 This sounds great! Love the combo of the scallop and blueberries!

Veronica here over at My Catholic Kitchen. I want to thank you for the yummy cookies you sent me in the mail for the Great Cookie swap. I look forward to seeing your post next week.