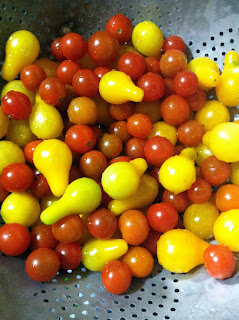 We know we keep saying we're tired, but it's the truth. Teaching isn't easy, and today after school, long before Chris even got home, Amy briefly hit a wall. She needed therapy. She tried retail therapy, but since the last paycheck she saw was in June, that wasn't going to work. Thankfully, though, therapy did arrive, in the form of slightly over four pints of cherry tomatoes from across-the-street neighbor, Barb, and her grandson James, of "James's Sunflowers and More," our friendly neighborhood farmstand (who even donate half of their proceeds to charity!). 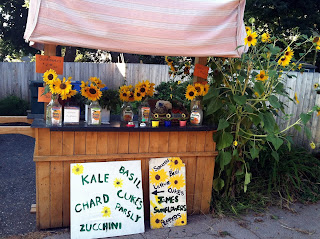 We were worried that we wouldn't be able to do our annual cherry tomato roasting, since our own so-called garden is in a such a state of disarray, given that we were away for most of the summer. But in the last eleven years, if there is one thing we've learned, it's that we can count on our neighbors. 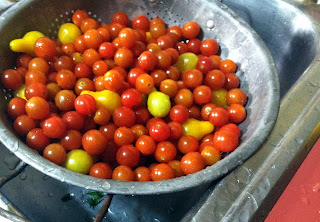 It took an hour and a half to wash and halve all those tomatoes and peel a head of garlic, but that was the point - that's the therapeutic part. Amy's always loves doing those type of tasks, you know, the ones you do over and over without having to think, like knitting, cross-stitching, filing, and apparently, halving over four pints of cherry tomatoes. 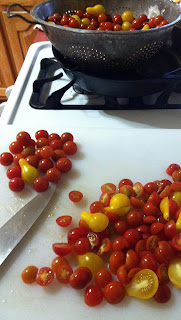 And right now, the oven is doing all the work and she's feeling much better, enjoying a well-deserved glass of wine and thinking of all the summery yumminess this past hour and half will provide in the dead of winter. 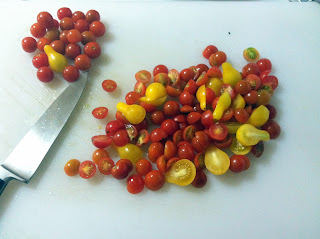 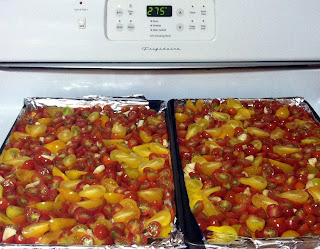 Those looks so yummy! I cannot wait to try your recipe. Thank you Chris and Amy!

Oh, the things that quiet our minds...

Look at all those yummy tomatoes!