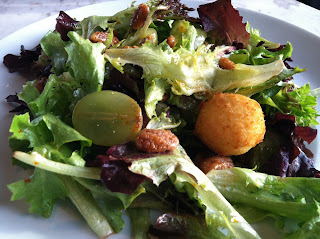 Thanks to a good deal from Living Social, we finally got the chance to check out Rooftop 120 in Glastonbury, CT for dinner. It turns out the hype is pretty well deserved, at least as far as the food goes, and for us, it's usually all about the food. It's a gorgeous space, with a dining room area as well as a (rather noisy) bar area which also has tables for dining.  Although the titular rooftop overlooks a parking lot, it's always nice to be outside, or in our case, nearly outside, up high, with plenty of bright light and a view of the sunset.

We were seated in the bar area facing a table of 12 - a male doctor taking his all-female nurses and office staff to a thank-you dinner. (Either that, or it was some sort of harem situation). The bar itself was nearly full, and the tables filled up as we ate, so word is definitely out - this is where the "beautiful people" go. Chris ordered a Sazerac, but they were unable to make it; they don't carry rye. So he got a Manhattan instead, and while his first was delicious, the second, which was made by a different bartender (see below), was terrible. Thankfully, our server offered to get a new one made by the original barkeep. Since we here in the Constitution State are able to bring home wine leftover from a restaurant, Amy ordered a the 337 Cabernet which, when we finally got it, was perfect. 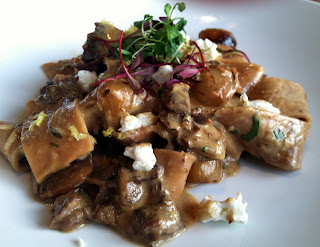 Yes, there were some service issues, particularly at the start of our visit. We ordered drinks, then our server completely disappeared for about 15 minutes. Then we got the Manhattan, then nearly 10 minutes later, the wine. So much for toasting to date night! We had a clear view of the bar and watched a female bartender stand in one corner area, chatting up two male patrons without moving or making a single drink for over a half an hour. Simply unacceptable. But, service aside, we have to admit, the food was fantastic.

On the website, the food is described thusly: "Progressive American Cuisine (focused on) innovative flavors that compliment the change in seasons." It being early spring, the seasonal menu was still their winter one, which was fine by us. And while we'd call it "upscale comfort food," we'd also concede that it was relatively progressive as well as innovative. 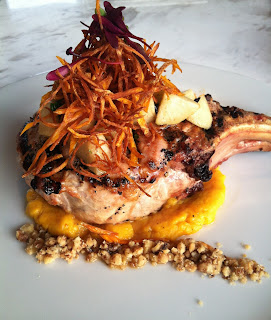 We shared the Winter Greens Salad, composed of halved Concord grapes, a ball of fried goat cheese, candied pecans, and a sweet chili vinaigrette (innovative, indeed!) that blew our minds. It was a great start, and you can be sure we'll be attempting to re-create it at home soon enough, winter or not.

Chris ordered the Braised Lamb Shank - hand made red wine pappardelle pasta, tossed with roasted pearl onions, baby crimini mushrooms, and garnished with a goat cheese gremolata. Although Amy hates mushrooms, she gave some of the pasta and lamb a try, and it was amazing. The pasta was clearly fresh and you could taste a hint of the wine in it. The meat was incredibly tender and the flavor, outstanding.

Ever the carnivore, Amy chose the 16-oz. Grass-Fed Pork Chop. This ginormous hunk of meat was served on the bone and cooked perfectly to medium, as requested. It was juicy and tender and flavorful and had a really good sear on it. It was served with a sweet potato puree that balanced the pork nicely and a garnish of walnut brittle. While there was a lot of sweetness in the dish, the caramelized country apples offered a tart balance and the brittle gave it a nice crunch. 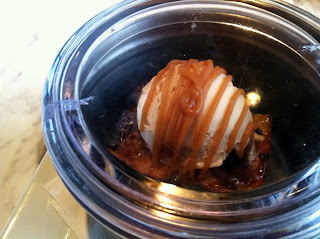 After coming close to finishing the chop, Amy was full and didn't order a dessert, but figured she'd have a bite of Chris's. He went for the Banana Chocolate Chip Bread Pudding which was served with a small scoop of hazelnut gelato and topped with caramel sauce. While bread pudding seems to be last year's thing, this was warm and fun. It was served in a charming little closed canister and had just the right balance of chocolate to banana to hazelnut to caramel. All yummy things.

To sum up? The restaurant's website touts the views, the trendy atmosphere, the happy hour. That's all fine and good. We'll be back simply for the food, since it really was that good. 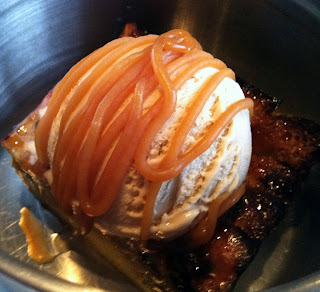