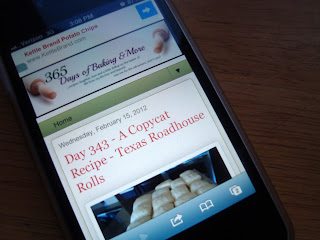 It's November's Secret Recipe Club Reveal Day and boy, did we get lucky! We were assigned 365 Days of Baking and More, an incredible blog by Lynne filled with sooo many baking (and non-baking!) recipes that we had a very difficult time choosing one. ﻿We were quite tempted to stay in our comfort zone and make something that didn't involve baking. As you are probably aware, we've had some baking issues in the past. But then, we decided to challenge ourselves. Lynne's blog is primarily about baking, and we should embrace the theme! So, then, the questions were: should we make one of Lynne's dozens of cookie recipes? Homemade Suzy-Q's in tribute to the (oh-so-sad) end of Hostess? Donuts? Muffins? Brownies? Cupcakes? Then we saw it: a copycat recipe for Texas Roadhouse's famously fabulous rolls with cinnamon honey butter. Woot!!!

If you have ever been to a Texas Roadhouse, you know what we're talking about. These rolls are light, fluffy, slightly sweet, amazing bites of paradise. We love them and do our best not to fill up on them before the rest of our food comes. We often fail. We were so excited to see Lynne's recipe, punctuated with her enthusiasm for how good they come out. To quote her:

"This is one of those recipes on the 365 blog that I STRONGLY recommend that you make!  I'm not trying to force you into anything here, but I really don't think you'll be sorry. These should be served at EVERY special occasion!! Even when there isn't a special occasion you just NEED, yes you NEED to have these in your life. They. Are. Almost. Better. Than. Chocolate. Almost."

That did it for us. We were going to make rolls. From scratch. For the first time, ever. Here we go! We followed her recipe exactly. Her blog had clear, step-by-step directions and pictures to go along with them, so it was easy to follow. Nothing about it was especially difficult, although it was sort of time-consuming, you know, waiting for the dough to rise and rest and all that. At the same time, it was kind of fun!!! Baking?!?! Fun?!?!? Yes, we said it.

Results? Our rolls were a teensy-weensy bit dry. Nothing that delicious butter couldn't take care of. We ended up with 21 rolls, so as usual, we shared with the neighbors. Perhaps we are too critical of our own work, because D texted, "OMG. #%@ amazing. It was perfection. I could eat 10 of those. Like a dessert." Enough said. Thank you, Lynne! You may have converted us!

How great would these be on the Thanksgiving table?!?!?


Cooks' note: Since we had never made bread by hand before, we found this website about kneading dough very helpful!

In the bowl of a stand mixer, dissolve the yeast with the warm water and the teaspoon of sugar. With the dough hook attachment, mix in the milk, remaining 1/2 cup of sugar, and 2 1/2 cups flour to make a medium batter. Mix thoroughly. Allow to stand until light and foamy, about 8-10 minutes. Add 3 tablespoons melted butter, eggs and salt. Continue to mix with the dough hook until well combined. Slowly add remaining flour, to form a soft dough. Turn dough out onto a lightly floured surface, and allow it to rest for about 10 minutes. While dough is resting, prepare a large bowl by spraying it with cooking spray. Knead dough until it is smooth and satiny (we did this by hand and it took about 7-8 minutes). Place into prepared bowl and turn over, coating it with oil. Cover bowl tightly with plastic wrap and set to rise in a warm area until double in size, about 1-1 1/2 hours. Punch dough down. On a lightly floured surface and with a lightly floured rolling pin, flatten dough into a rectangle until it is about 1/2-inch thick. Fold the rectangle in half the short way so that it is about 1-inch in thickness, and lightly roll together to seal the sides together. Allow to rest for 10 minutes. With a dough scraper, cut into rolls. Place rolls on a greased baking sheet. Cover with a damp towel and allow to rise in a warm area until double in size, about 1 hour or so. Preheat oven to 350 and bake rolls for 10-15 minutes or until lightly golden. Upon removing from oven, brush tops with melted butter.
Serve with Cinnamon Honey Butter.

In the bowl of an electric mixer fitted with the whisk attachment, beat the butter for approximately 30 seconds until lightly whipped. Add honey and cinnamon and beat until smooth and thoroughly combined, scraping down the sides of the bowl. Continue beating on medium-high speed until light and fluffy, about 2-3 minutes. 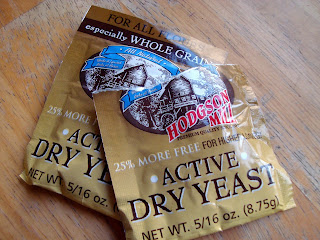 Dissolve the yeast with water and sugar. 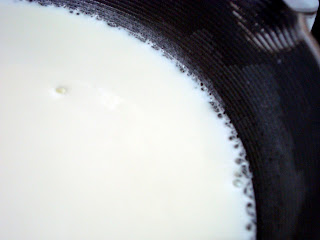 Scald the milk and allow to cool to lukewarm. 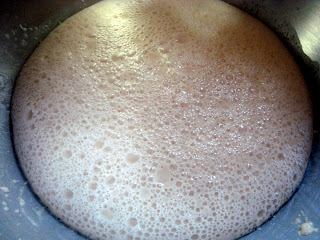 The yeast starts to foam up in the bowl. 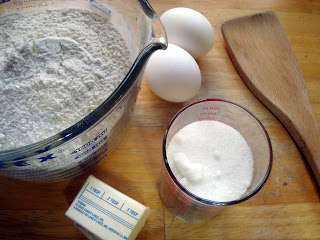 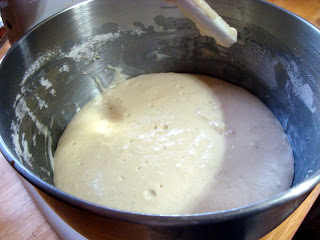 Add the scalded milk, sugar and flour and mix with the dough hook attachment.
Allow it to stand until it is light and foamy, about 10 minutes. 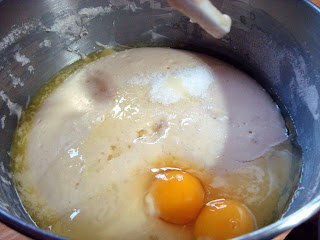 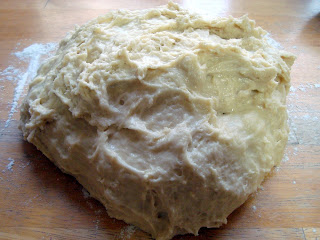 Mix in remaining flour using the dough hook attachment until it forms a soft dough.
Turn onto a lightly floured surface and allow to rest for 10 minutes. 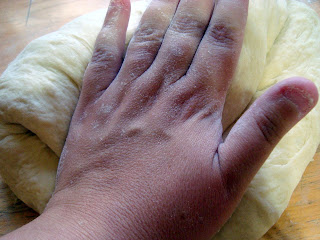 Knead dough until soft and satiny. When you pinch it, it should feel like an earlobe. 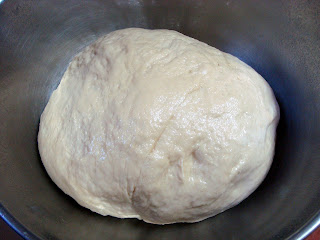 Turn into a bowl sprayed with cooking spray, then flip it.
Cover tightly with plastic wrap and allow it to sit in a warm place for 1 to 1 1/2 hours, until it doubles in size. 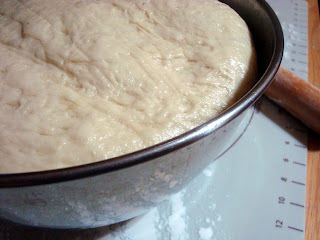 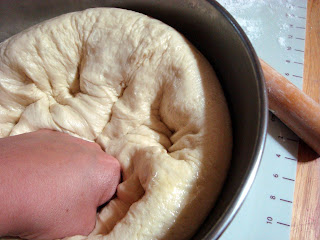 Punch it down. It's amazing how full of air it is! 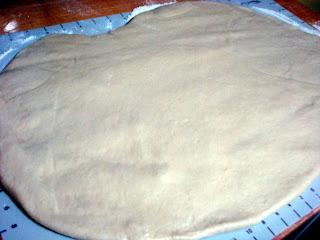 Roll it out to 1/2 inch thickness on a floured surface. It takes up our whole baking mat! 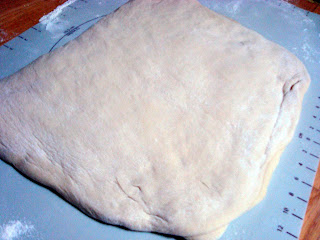 Fold it in half and roll it to be about 1 inch thick. 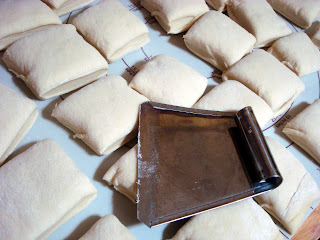 Use a baking scraper to cut into desired size rolls. 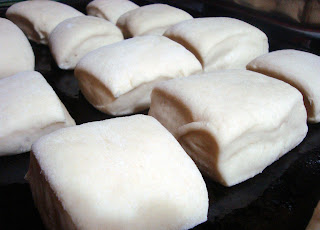 Place on a greased cooking sheet.
Cover with a damp towel and allow to rise in a warm place for about an hour. 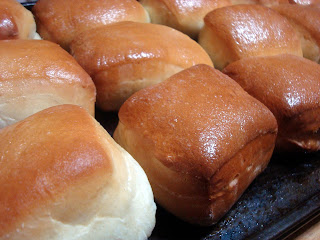 Bake at 350 for 15 minutes, until golden brown.
Brush with remaining tablespoon of melted butter. 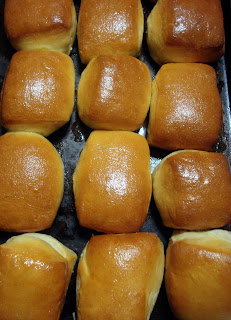 Huzzah! We made rolls!!! 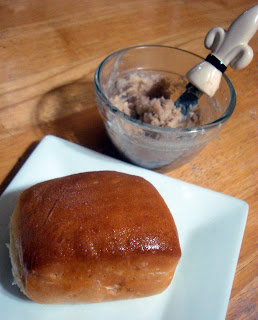 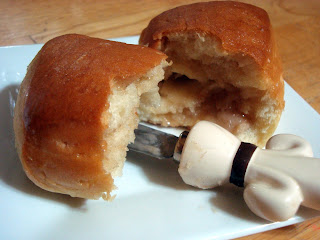 AMY!!! I'm SO very excited you made these and that you loved them!!! GREAT job BAKING!!! You guys did an amazing job!! See, no sweat, right? haha
Thanks for making them and for the kind words! You both rock and it's super awesome being in Group C with you!!

Way to go! Your first bread!

I always make the cinnamon butter but now I must try the recipe for the rolls! I die for them!

You're killing me here. Yet another recipe to try :-) Loved the tea smoked chicken and can't wait to make the champagne scallop risotto - and a ton of other recipes from your blog. So glad you made it thru Sandy unscathed. I wanted to write in the midst of everything but didn't want to blow the SRC cover. See you later, Kate

Thanks, Amy, for sharing a couple of these rolls with me today.
They were delicious! As I said, the sweetness of them is slightly reminiscent of babka--which I love and is nice in a roll.
Happy Me.

you didn't just make rolls, you made ROLLS---those look terrific. great work--and it looks like an excellent recipe.

I love Texas Roadhouse rolls and I've tried a lot of copycat recipes without success. I'm definitely pinning this one to try! :)

Great job, they look wonderful! I too am in the camp that homemade bread/rolls is just as good as dessert. So much love. So hungry now! lol

These look awesome. Homemade rolls are the best! Great pictures!

Those are perfect looking rolls!

What a great recipe! I love Texas Roadhouse rolls, and their butter. This just might make it to my Thanksgiving dinner table. I am seriously craving them now! Beautiful job!

These look soooo good. Found you at Julie's eats and treats!

Oh, my. These are picture perfect...and I'm sure they taste as fabulous as they look. What a wonderful recipe for the Thanksgiving table!

I am not a big Texas Road House fan, but I do love their rolls. Great pick for SRC.

These rolls look so soft and tasty! A must try!!!!

Your rolls look gorgeous! That's awesome you went out of your comfort zone. I would love to be your neighbor and help you take some of those off your hands!

It's perfect that you got to explore a completely new technique for the blog through this recipe exchange. You never know what you'll get to learn next.

These were absolutely amazing. It was my first attempt at making yeast bread and they turned out perfect. My husband has already eaten half of them! I did add brown sugar to the cinnamon butter because i thought it needed more texture! Thanks for sharing!

I made these tonight to go with cheese burger soup and I'm not sure I've ever been so loved by my family. :) I used bread flour instead of all purpose and they were, hands down, the best rolls I've EVER made! Thanks so much for the recipe. I'll definitely be making these often!